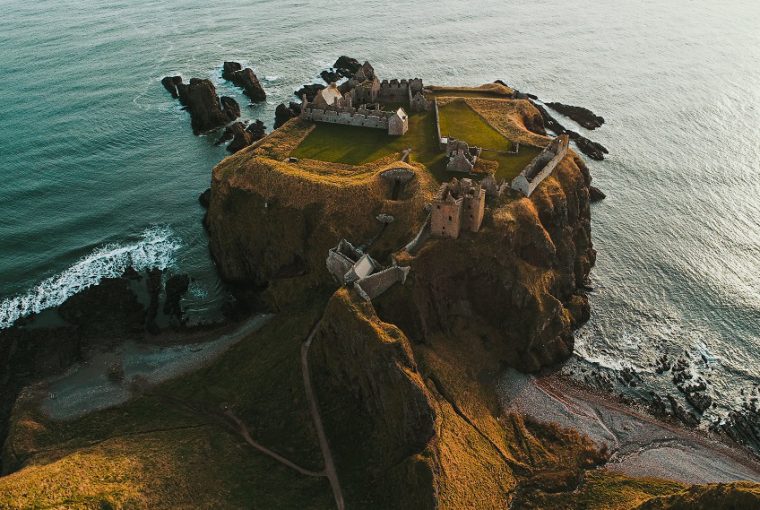 Aberdeenshire Castles and the Historic Giants of the North East

With autumn in full flow and a gentle sting in the crisp air, I look once more to the north. The feel of history-influenced rural terrain under my feet is home turf indeed as the long list of Aberdeenshire castles drifts once more into my crosshairs. Castle country, the north east is littered with ruins spanning every chapter of our long story. Are you sitting comfortably?

Adrift in a lonely sky, isolated in the chilly heights of the Cairngorms, sits Scotland’s star.

Corgarff is the remote, star-shaped keep that has been taking a beating from the elements since 1530. Built by the Elphinstone family, though leased to the Forbes of Towie, it took only forty years of existence to be witness to one of the Highlands’ most harrowing events. With the Forbes Lord and his menfolk absent, local competitor Adam Gordon made an attempt to seize Corgarff in 1571. Lady Forbes was having none of it and aggressively refused entry. 27 people, including the Lady and her children, were then burned alive in the castle under Gordon’s orders. Wailing down from the peaks above, that form Corgarff’s hilly and barren backdrop, their screams can still be heard. 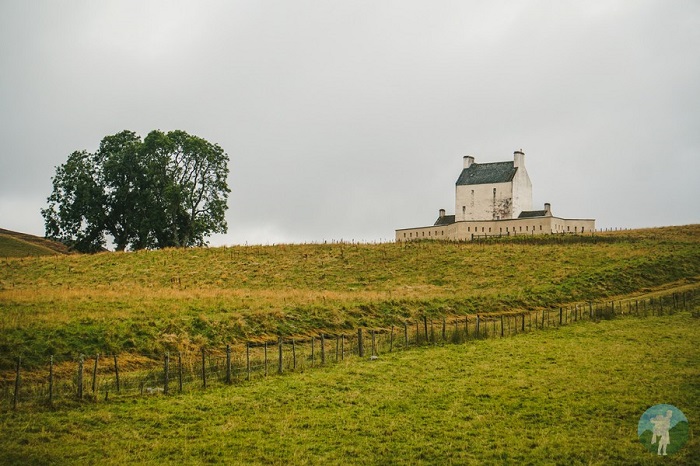 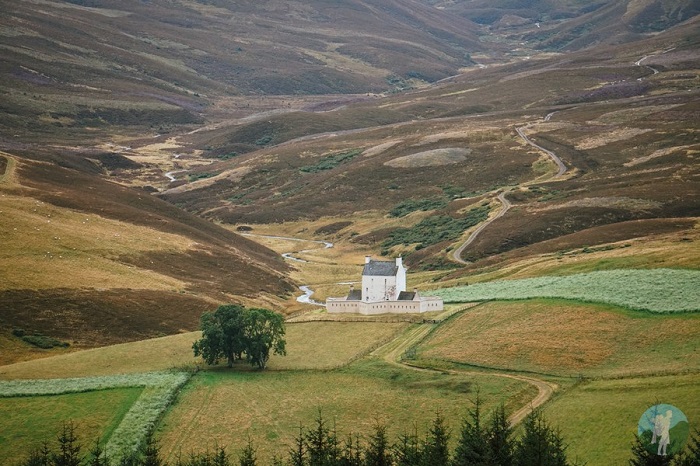 In 1748, the British Government purchased the castle with a view to establishing it as a barracks to prevent any further Jacobite chatter post-Culloden. In the 1800s it also served as a base for policing the rise in illicit whisky distilling that soon flooded the region. Though in a humorous twist, the Castle itself would go on to house its own, very small, distillery in 1820s. Cairngorm winters are no laughing matter, after all.

In the chilly southern confines of the Cairngorms, watched over by majestic Lochnagar, armoured in granite and cloaked in deep, rough heather purples, sits a Highland icon. Queen Victoria – one of history’s more characterful monarchs – began construction on what was to become one of her great passions in the mid-19th Century. Aided by her equally enthusiastic husband, Prince Albert, they poured their love for the area into Balmoral over several years. A release from the pressures, stresses and politics of London, the estate very quickly became a place of escapism and tranquillity as Victoria began a Royal trend that holds firm to this day. 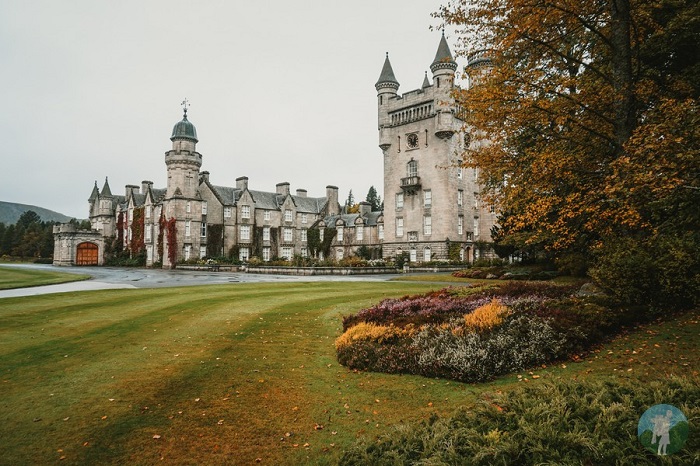 Aside from an obvious castle guided tour, take a wander. The Estate now spreads to 50,000 acres and is home to a largely self-sufficient community of workers and residents. Walk to the numerous commemorative Cairns that linger in the forests and hilltops overlooking the Castle. Find the astonishing 19th Century pyramid dedicated to the Prince Consort or join the hikers, salmon fishers and wildlife spotters that share Victoria and Albert’s discerning eye for the power of nature. 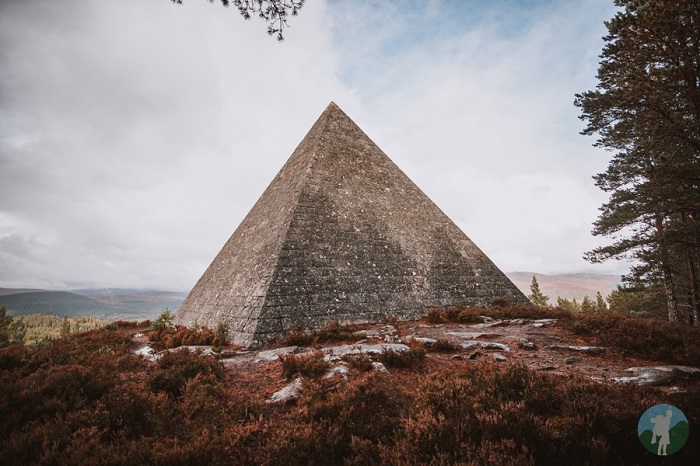 The tree-sentineled avenue leading to Huntly Castle is one of the most anticipative approaches to any ruin you’ll encounter. Ancestral home to the chief of the Clan Gordon, its initially almost foreboding appearance dissipates warmly upon a good recce. The main five storey tower is remarkably thin in design, though does hold an inspiring collection of rooms and decorative detailing.

The Gordons of southern Berwickshire were granted the Aberdeenshire castle and lands by Robert Bruce as a reward for their loyalty post-Bannockburn, so beginning the stranglehold that the Gordons would long hold over the north east. It was the 15th and 16th Centuries that saw it take on its enduring personality, however, following its firing by the rival Douglas family. Heraldic decorations hang ostentatiously over the entrance and a giant round tower and huge window positions underline the status of its lordly owners. 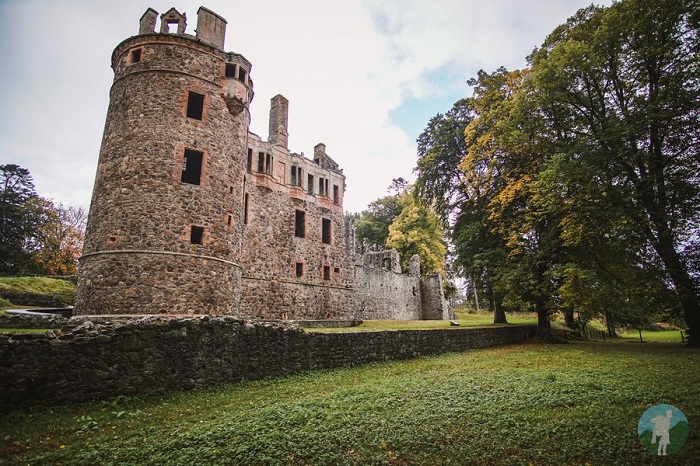 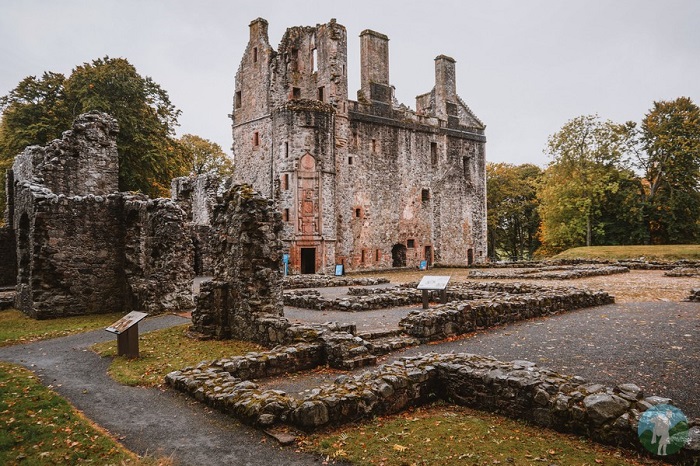 Today, red squirrels scurry in the remnants of the courtyard outbuildings and the torrent of the neighbouring River Deveron adds an autumnal cacophony that make it atmospherically superb.

An impressive roster of big names have rested their weary heads at this once-Royal Aberdeenshire castle, with medieval Scots kings including William the Lion, Alexander II and Robert the Bruce among them. The dreaded English King, Edward I, dropped in too while exerting his influence over his subjects in the months leading up to the Battle of Stirling Bridge in 1296. Although something much humbler would have stood in those days, its defendable placement (in a river bend and almost surrounded by marshland) gave it a very practical appeal during endlessly tumultuous times. Fyvie was granted out of royal ownership in 1370 and passed from the Bruces to the Lindsays, the Prestons, the Meldrums and the Setons. It was the latter, by now entering the 17th Century, that shaped the imposing yet picturesque castle that remains today. 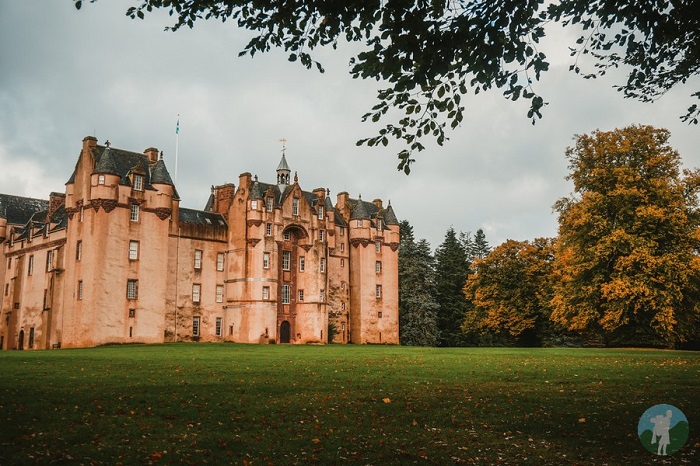 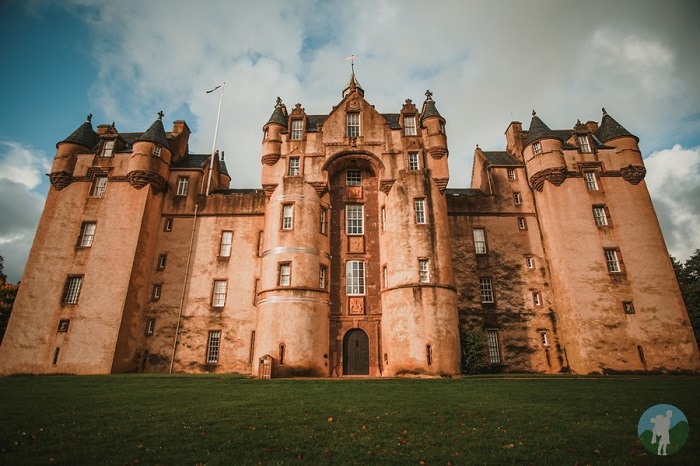 The powerful Gordons came along in the 18th Century and picked up Seton’s baton in the development of the Castle, while also draining much of the sodden surrounding terrain and beginning the growth of the woodlands and gardens which still impress all that visit.

It looms. Horrifying and ominous with unflinching and intertwining defiance and allure on the edge of the land in the far distance. Light screams down, stabbing through cloud, in shards to the east of the panorama, seeming to bounce back off the water like pebbles on ice.

In a country that excels in spooks it’s no modest achievement in being possibly the most chilling structure in the land. The Dracula-inspiring wreck has lain abandoned, roofless and forgotten – by all but the thrill seekers among us – since 1925. ‘Come in, stay a while’ it almost cackles as you approach the entrance.

Francis Hay, the 9th Earl of Erroll, constructed what is now New Slains Castle in the final years of the 16th Century, with subsequent Earls expanding and amending it over numerous generations. It adopted the distinguished Scots Baronial architectural style (think pointy turrets) in the 1830s but was ultimately sold and stripped of its roof within the following century. The overgrown and drafty remains have sat abandoned ever since. 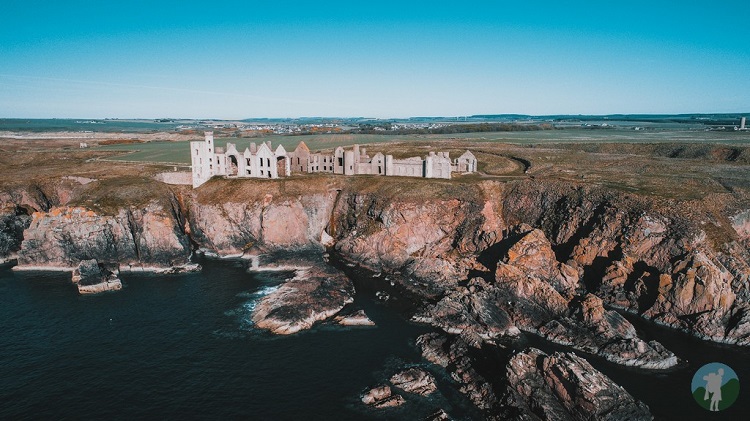 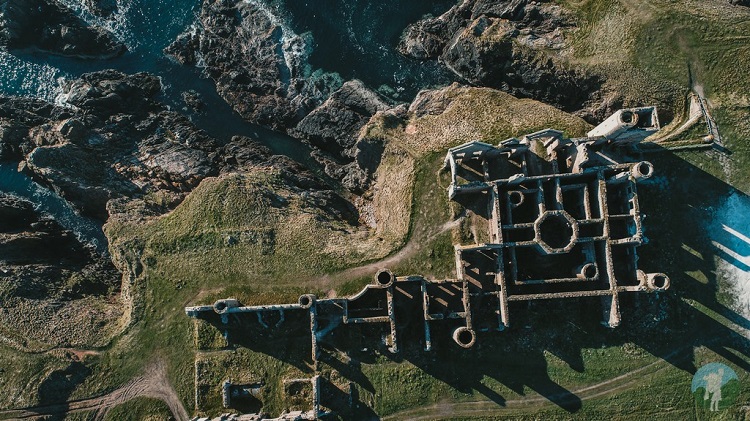 Being able to combine my desires for walking and for ruin-pokeaboutery is a fine thing indeed and I most definitely advise approaching the coastal Aberdeenshire castle with a lengthy wander from the north, tying in the spectacular Bullers of Buchan. Dramatic, sheer cliffs are all that will separate you from the bitter chill of the North Sea, often caught hiding beneath a cloak of thick haar. The perfect build up. Allow up to an hour each way for what is a flat hike along the makeshift but clear path that hugs the coastline.

The backroads of rural Aberdeenshire promise much as you arrive on another of the great estate castles of the north east. Seemingly endless acres are home to forests, wildlife and families in search of days out.

Castle Fraser, itself an unusual z-plan structure that is in reality just an extended form of a simple tower house, delivers it all. Family home to the Frasers for over 400 years, it’s journey since then hasn’t seen it stray too far from its familial feel. From the quirky Laird’s Lug (presenting a quite literal meaning of the expression ‘the walls have ears’) to the functional walled gardens that churn out fruit and vegetables even still, it’s one of the classic National Trust for Scotland properties. 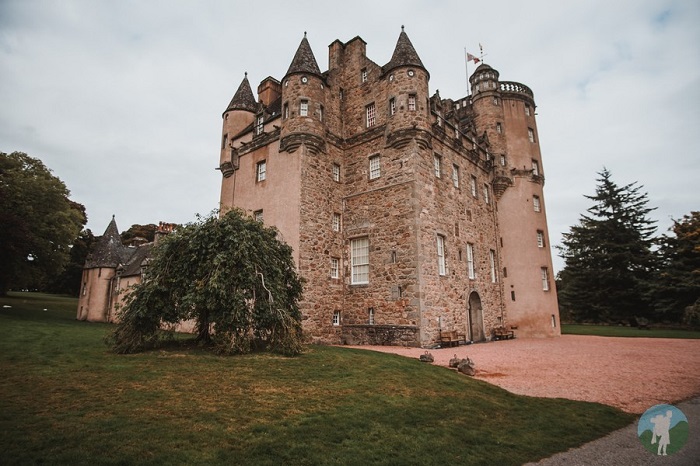 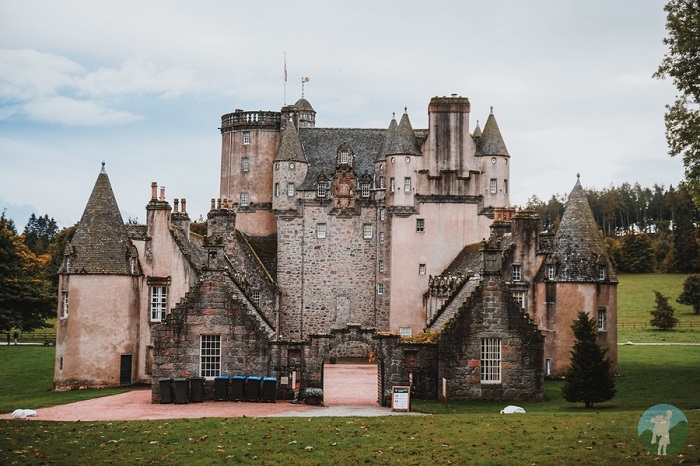 My road south takes me inexorably via perhaps the greatest castle of them all.

Warriors going back to the 6th and 7th Centuries have shared this view. The Picts and the Vikings have been here. Bishops, Kings and Queens, and William Wallace most likely too. Regardless of the differing man-made contributions of the time, all would have looked on in awe. Defensively impregnable, Dunnottar sits on its headland atop sheer 160-foot cliffs, with only a narrow, steeply ascending strip connecting it to the mainland. Besieging commanders may shudder. 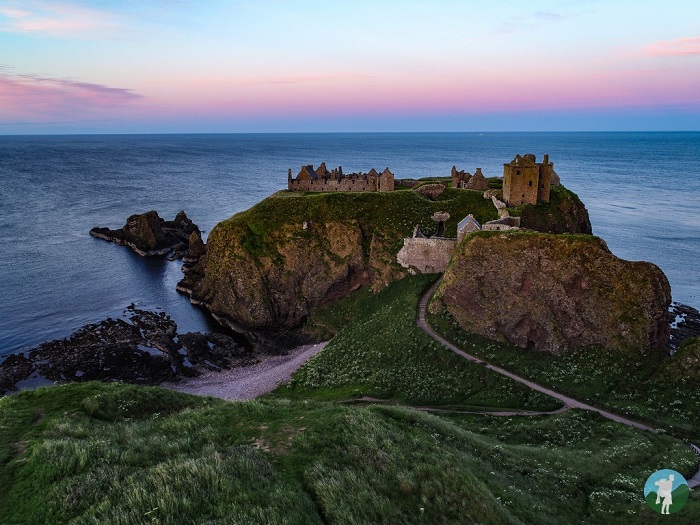 Even the inferno of destruction caused by Oliver Cromwell’s brutal flattening of Scotland in the 17th Century was left thwarted by Dunnottar’s stubbornness. Rabidly seeking the Honours of Scotland (our crown jewels) that were being hidden inside, his men huffed and puffed outside for 6 months before Sir George Ogilvie, the castle governor, surrendered. He only did so, however, having already slyly smuggled the Honours out under the very noses of the frustrated and wearied blockaders, within the lining of a seemingly innocent kinswoman’s clothing.

Most of today’s surviving buildings predate that blockade and the vista east over the headland and out to sea is a window into the Middle Ages even still. Through the eyes of legends, drink in moments you may never forget. 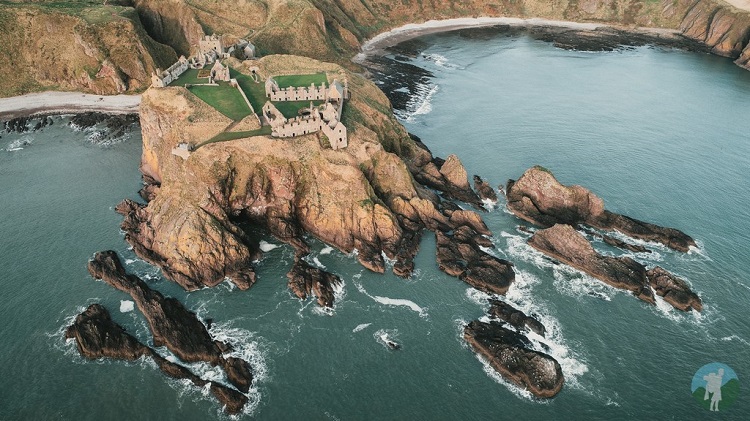 The long list of Aberdeenshire castles goes further than this collection too, with several more beauties covered in this old blog. Kildrummy is one that I’m particularly eager to return to (for novel research purposes too) next year. For these are lands where wealth, religion, agricultural appeal, royal influence and family feuding has long ruled forcefully. Whether for advancement of status or the murderous destruction of an enemy, Aberdeenshire has a castle for that. And for diversity, there’s nowhere finer.

Where to Stay and Eat

Aberdeenshire is a big region and the above will need multiple bases of operation over the course of several days. Top picks for me are Meldrum House, north of Inverurie, and Maryculter House, west of Aberdeen itself. Both accessible yet rural in setting, the quality of accommodation, and in-house dining, is excellent.

Meldrum House is set among 240 acres of Aberdeenshire countryside and includes a golf course and ballroom. The photogenic core is in the classic Baronial style, a perfect companion if that east coast haar decides to make an appearance.

Maryculter is astonishingly the site of a 13th Century College of the Knights Templar and retains a medieval look and feel in several of its rooms. The basement is thought to have formed part of the resident Preceptor’s Lodging. A local dram before bed, aside a roaring wood fire, in their lounge is well advised.

Another top dining option, while tackling the castles of the Southern Cairngorms, is the iconic Fife Arms. The 19th Century Braemar landmark is both authentic and luxurious, with a menu very focussed on local specialities.

This article has been created in paid partnership with www.visitabdn.com. Although invited to visit the above sites, everything within is based solely on recent personal experience and all recommendations and endorsements are honestly given and not influenced by the partnership. I’m genuinely castle daft, you’ve probably noticed.