Travels with a Kilt
Highlands ScotlandScotland on the CoastWalking in Scotland

How many times have you travelled as a tourist to an existing bombing site? As in, you pay money willingly and with a smile to go somewhere that is so remote that the military still use it for regular target practice? It’s certainly a first for me. Cape Wrath, at the very north western tip of the British mainland, is where I’m all too thrilled to be on the receiving end of Her Majesty’s Air Force.

The west coast of Scotland is a specialist in rugged and dramatic scenery. People come from everywhere to see its peaks, lochs, beaches and barely-there country roads. Cape Wrath at the very top is amongst the most spectacular spots of all. It can be found near the small town of Durness and can be accessed by a boat/bus tour combination. The general impression of Scotland’s geography is that Inverness is way out there, way north, ‘that’s the proper Highlands that’, end-of-the-world, headspinning stuff. Durness is a few hours north of that. 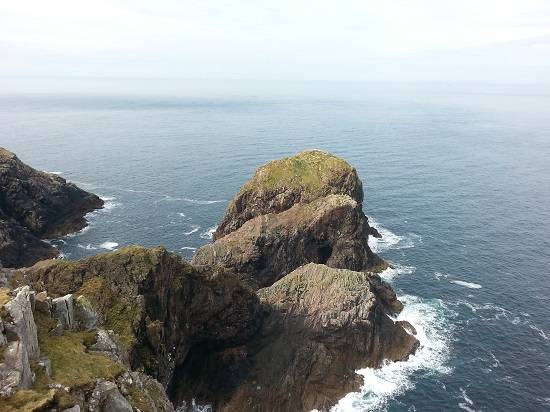 The Cape Wrath peninsula is a barren and desolate place with only a sprinkling of buildings and is almost completely uninhabited. It is actually closer to the Arctic Circle than it is to London. As with the likes of Orkney and Shetland though, wildlife can be found in abundance. Red deer, seals, buzzards and a golden eagle are amongst the most impressive. The end destination is the Stevenson lighthouse. Built in 1828 it was intended to put an end to the numerous shipping casualties over these torrid waters.

A couple of years ago I was lucky enough to visit the Cape of Good Hope in South Africa. Basically the exact same except way down at the other extreme end of the world. Swap a few ostriches for a few sheep and the temperature by a few dozen degrees and it’s hard to tell them apart. 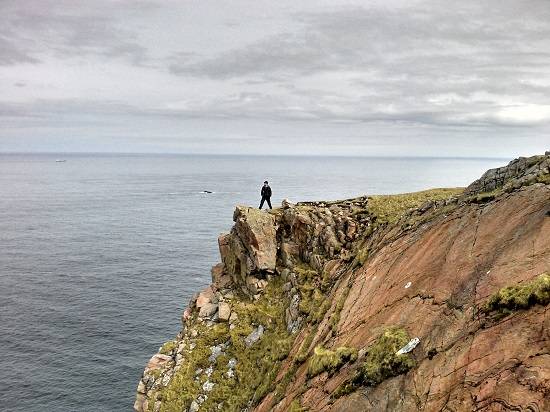 So back to the issue of bombings. I exaggerate of course (I think, anyway) as there is no risk to the dozen tourists crammed into the wee bus that meanders its way to the Cape lighthouse, but the bombing is still a fascinating thing to watch from a safe distance. Numerous bombs have landed on or very near the bus route over the years mind you. Regular signs warn users of remaining shells and there are numerous craters where errant bombs have gone off. Fills you with confidence that doesn’t it? Errant bombs. Pilot got his directions all wrong and the thing has shied miles off course pre-detonation. Not today fortunately. The warning signs though are a wonderful effort at dry humour: “Danger. Do Not Touch Any Military Debris. It May Explode and Kill You”. So there.

On this trip the bomb is dropped on Garvey Island within sight of our position at the lighthouse and is visible and audible as the jet comes in. Boom. All over in a flash. Below is a picture of the aftermath. 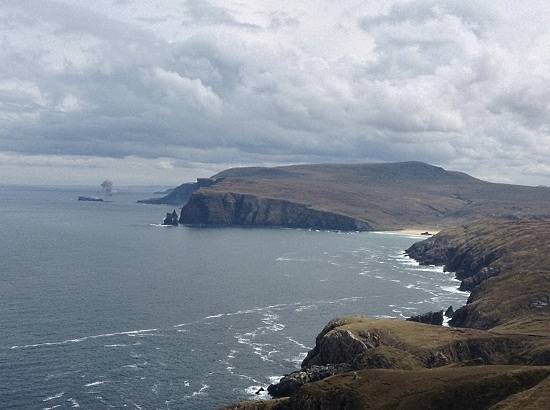 This all sounds very grim doesn’t it? You’re supposed to be on your holidays and here I am using words like desolate, barren and….bomb. Mallorca sounding more and more like a better bet? A cheery note then. Kearvaig Bay is one of the most perfect and secluded beaches you could hope to see and is passed on the way to the lighthouse. The spectacular rock formation in the centre is known as “The Cathedral” due to its appearance. Although the tour does not include a visit to the beach, the locals have all assured me this is an infinitely better choice than more renowned Sandwood Bay nearby. Local info is utterly invaluable when it comes to Scotland. It’s well worth visiting independently if you have the time. 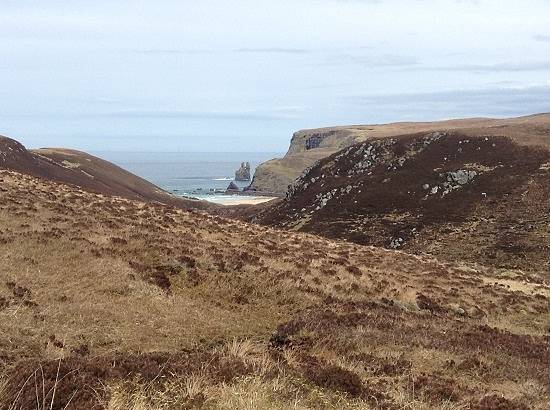 Anyway, here’s what to expect if you are visiting. The pickup point for the boat/ferry is just to the south west of Durness and that will take you the short distance over to the bus pickup. Sailing the boat is John and Stuart is behind the wheel of the bus. Both are a great laugh and add a huge amount to the overall experience. We had a drink with John in the pub afterwards and he is bursting with local knowledge and character. The bus/boat trip costs £16-18 per person and allow about 3 hours for the whole experience. Be aware that the tour may not run if the winds are high and you should check ahead first if in doubt. The road out to the lighthouse is also hilariously bad and Stuart’s excellent skills as a driver can only do so much. Prepare yourself mentally for a bumpy ride. You can find contact details and more about the tour here.

Cape Wrath. There’s a name for the goose bumps. A trip to the edge is truly an awesome visit to one of the world’s most dangerously isolated spots.

Craigievar Castle – have you ever visited a pink castle?

Going on a whisky distillery tour