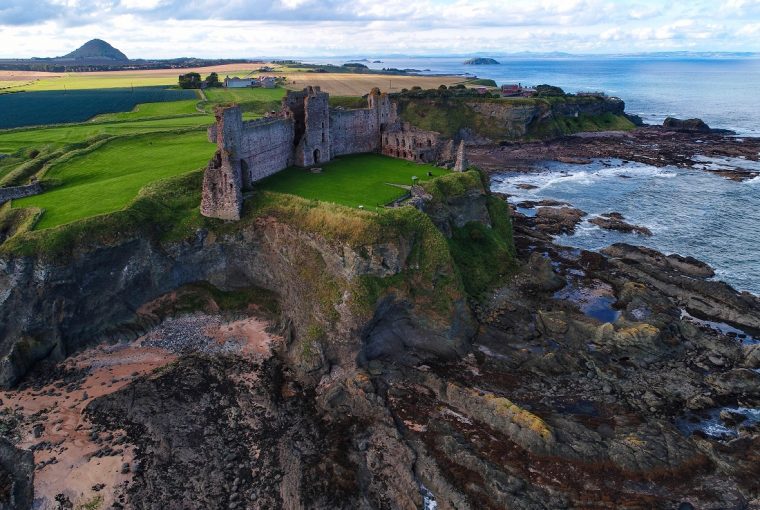 One of the undisputed iconic images of Scotland, it sits looking very chuffed with itself atop Castle Rock, bejewelling the crown of one of the world’s prettiest city centres. But it’s not the only show in town. Ruins are strewn across Central Scotland and there are numerous alternative castles near Edinburgh to satisfy even the most insatiable of history hunters. Sticking just within The Lothians, see what you think of this hit-list.

In 2018 I now realise that I found myself at this guy on 3 separate occasions (I didn’t visit Edinburgh Castle at all incidentally). Even for me that’s rare and says much about its growing status in Scottish tourism. Its role on-screen is the single biggest reason for this of course and it’s been a feature in both the Outlander and Outlaw King Scotlanders campaigns from recent times.

While its manufactured status as Ardsmuir Prison and the Bruce Castle may have piqued your initial interest, its genuine story is engrossing too. The interior remains an impressively deep labyrinth that brings out the hide-and-seek enthusiast in us all. Dating from the 14th Century, it was never a place for thunderous sieges but did receive a visit from herself, Mary Queen of Scots, while she was recovering from childbirth. Is it even really a castle if Mary hasn’t popped in at some point? Not as far as this blog post is concerned. 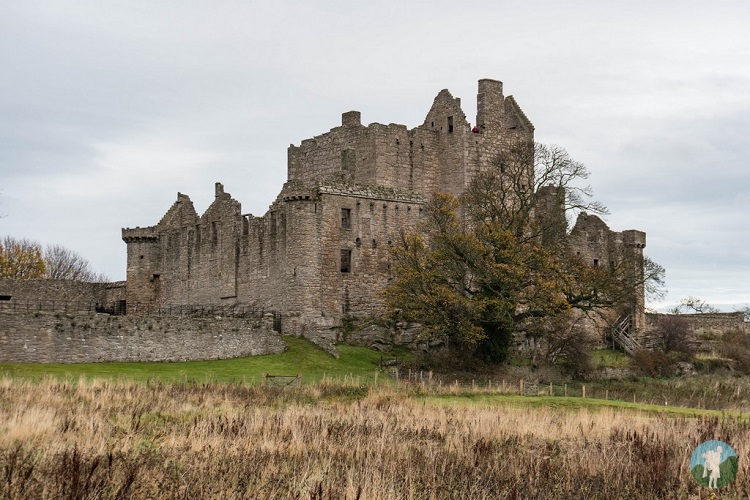 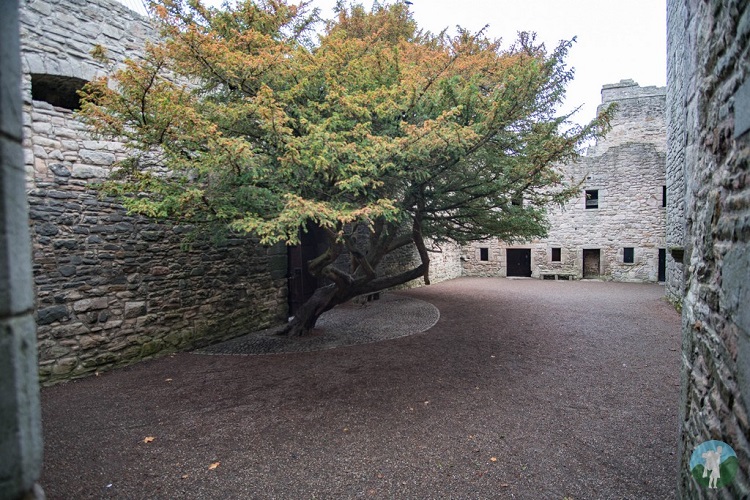 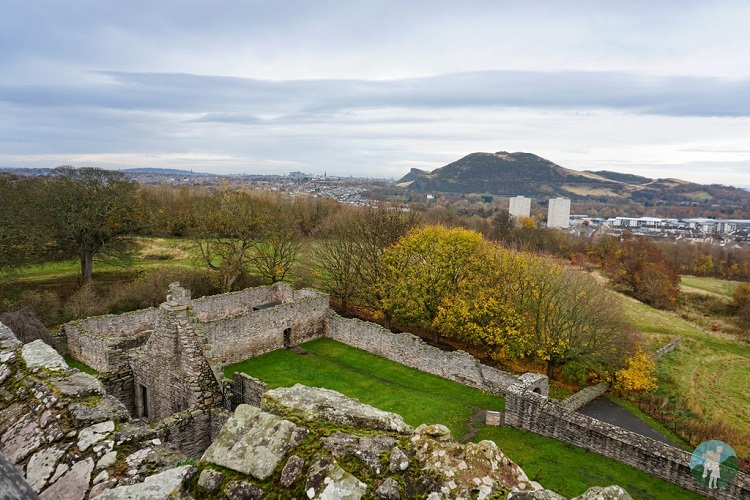 Still within Edinburgh herself, you’ll find it in the south-east outskirts of the city. The views from the ramparts see the capital spreading in front of you and I guarantee you’ll find this a much more intimate experience than its big sister on the horizon. It is in an excellent state of repair (another part of its appeal for the cameras) and the vantage point from the south is particularly strong on the visuals.

Barely a stone’s throw from Edinburgh, this rural relic makes for the ideal escape. Set amid Midlothian’s seemingly remote country landscapes, it also has one of the most impressive approaches (from the north) of all of our castles. Photographers will delight with the view from the roadside and the loneliness of the fortress gives it its own powerful presence. Birds of prey outnumber humans as the desolate surroundings bring unavoidable comparisons with Hermitage Castle in the Borders. 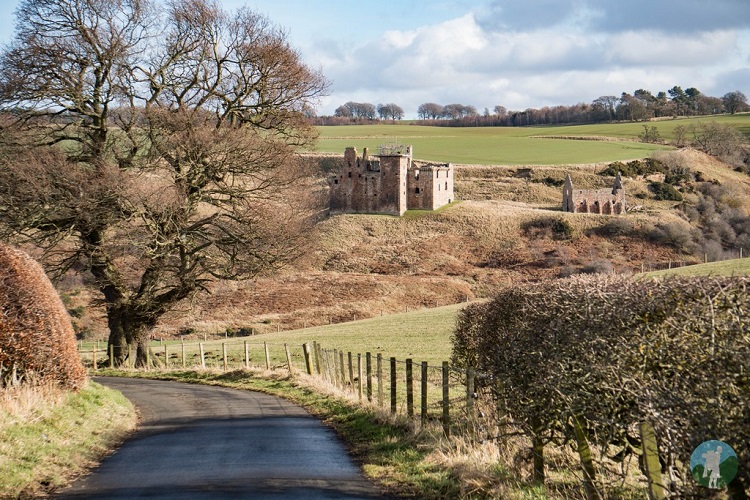 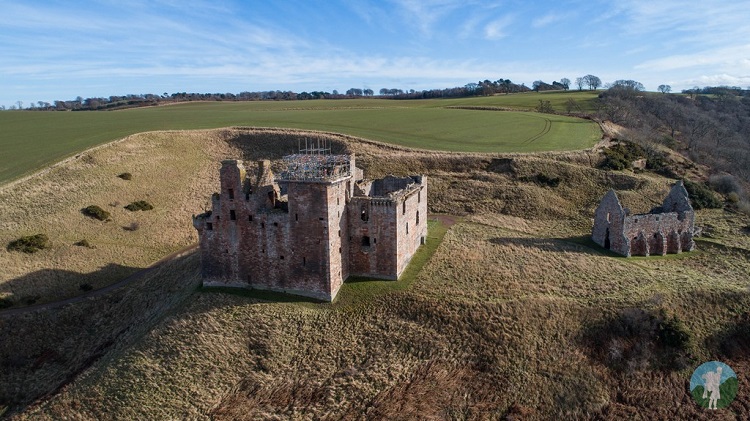 Built in 1400, it grew with the powerful Crichton family before passing to the even more prominent Bothwells. The 4th Earl was of course husband to Mary Queen of Scots and Mary was a repeat visitor here as well. It was a doomed marriage and ultimately led to the Queen’s legendary downfall.

The ruin is within 15 miles of Edinburgh’s city centre and is ideal territory for cyclists and horse riders. Signs of modern life are at an extreme minimum, enjoy.

While I’ve never quite worked up the fortitude to boldly proclaim any Scottish castle to be my absolute favourite, I’ve also never been shy about placing Tantallon in my top five. There is something undeniably magnificent about clifftop castles and only Dunnottar can really match this guy in the coastal drama department.

Another from the 14th Century, it was the last medieval curtain wall castle to be built here and endured a bit of a blasting from the siege engines in its time. Historic Scotland themselves call Tantallon ‘the last truly great castle built in Scotland’. Belonging to the Douglas family, it took a doing in 1491, 1528 and 1651 in particular, with the Douglases perennially keen on upsetting the powers that be from the south. The rogues. 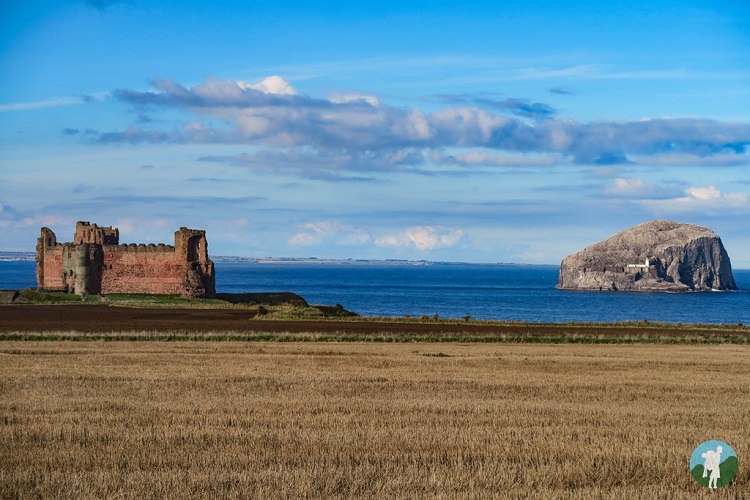 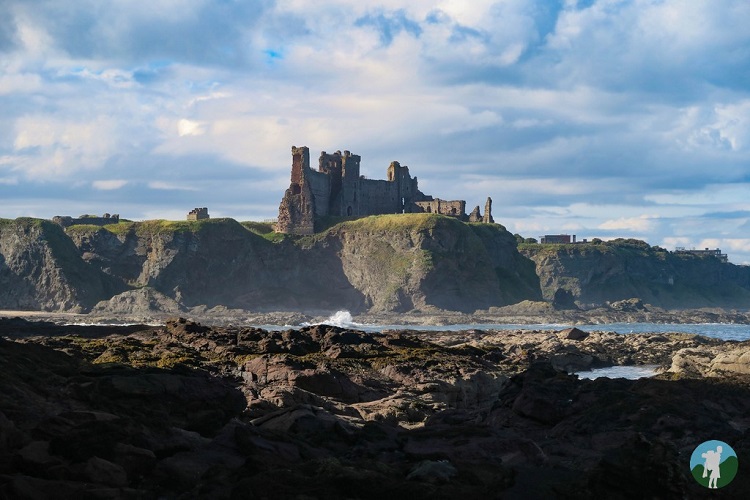 Although by no means a secret now, most visitors will miss a golden opportunity for the best vantage point. Seacliff Beach is another loved by the cameras and appeared in both of Scotland’s aforementioned recent movie titans. Looking up at the ruins from the rocky waterline makes for one of my favourite vistas in Scotland. Of all the castles near Edinburgh, this one requires the furthest hike and is about 45 minutes away by car. Worth every bit of it though.

I feel a little sorry for Dirleton. It’s near-neighbour Tantallon dominates my historical thoughts in these parts….but if Dirleton was almost anywhere else it would be right up there in my mind’s eye. A truly magnificent ruin that has all of the atmospherics and brooding rage that I’m after, all it is missing is a cliff.

The 13th Century fortress was one of many north of the border to change hands several times as the English and Scots duelled in the Wars of Independence. As one of the most robust castles near Edinburgh, it’s hardly surprising that it was in high demand. Its imposing walls show the scars of centuries’ worth of brutal conflict. Oliver Cromwell’s 1650 siege was the most savage and defenders were left hanging from the castle walls with the kind of brutality that we’d expect from Gregor Clegane’s Lannister mob in Game of Thrones. 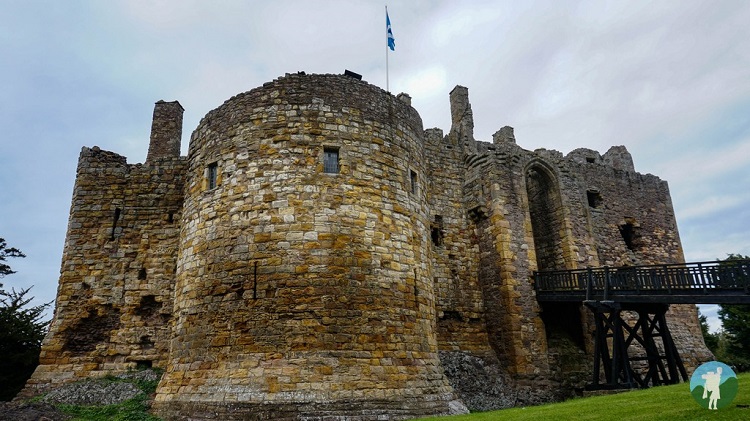 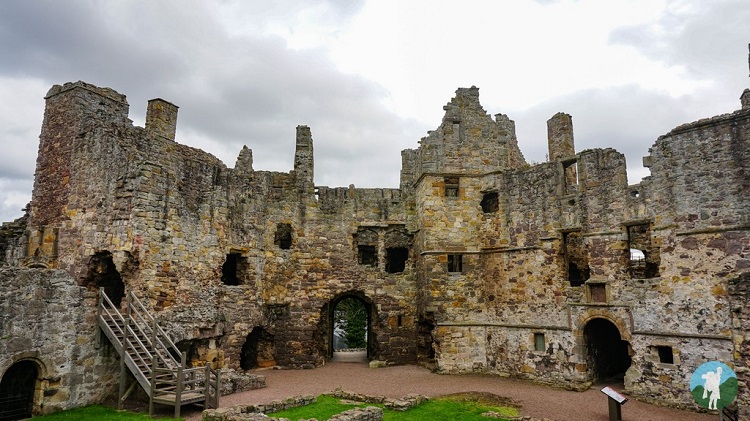 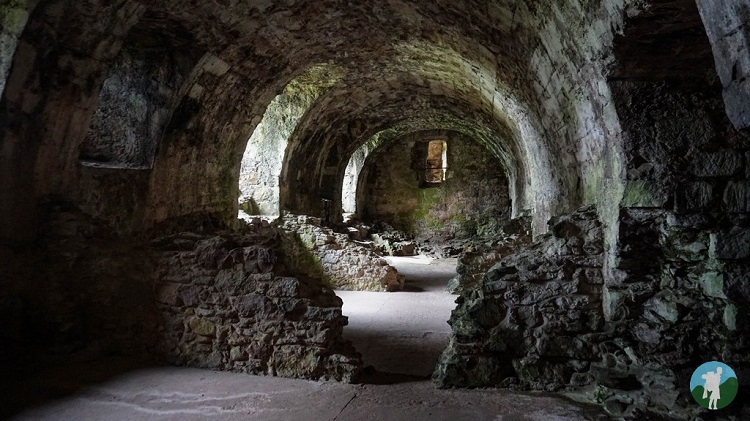 A walk through the main gate, imagining fear and fury pouring down on you from the ramparts, is a must. Once inside take half an hour to explore the nooks and crannies thoroughly, there is much to set your mind racing. Pit prisons, massive kitchen spaces and drafty bed chambers await. The surrounding gardens will provide you with the perfect tranquil contrast and do ask the staff if Andrew Spratt is around for one of his fabulous re-enactments on-site. Kids and adults alike will love his chat on medieval attire and behaviourisms. You’ll find Dirleton just a few minutes inland from North Berwick and the East Lothian coast.

The excellent Hailes Castle is a further East Lothian option for those that can’t get enough.

Very much a Palace more than a castle, but it ticks every box and more for what us modern-day ruin-seekers are after. Perched picturesquely aside Linlithgow Loch and within easy reach of the population centres of Central Scotland, it’s not hard to appreciate what its strategic importance would have been in centuries past.

It was a base for Edward I’s forces in the Wars of Independence, Bonnie Prince Charlie and his Jacobites were here, Mary was actually born here in 1542 and it stood as a long-standing retreat for the Royal House of Stewart. A convenient home from home when city life got too much, they would have converged on the Palace’s opportunities for a life of leisure with some enthusiasm I imagine. Cromwell’s destructive efforts and a devastating fire in 1746 brought its rich dynasty to an end however, and it was to never fully recover. 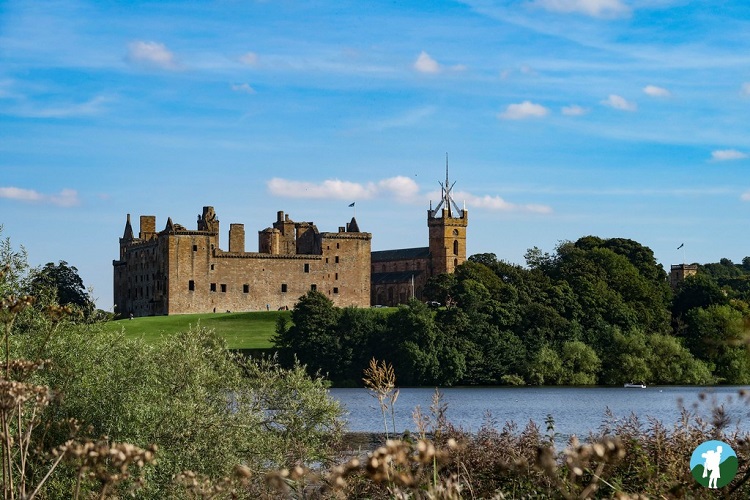 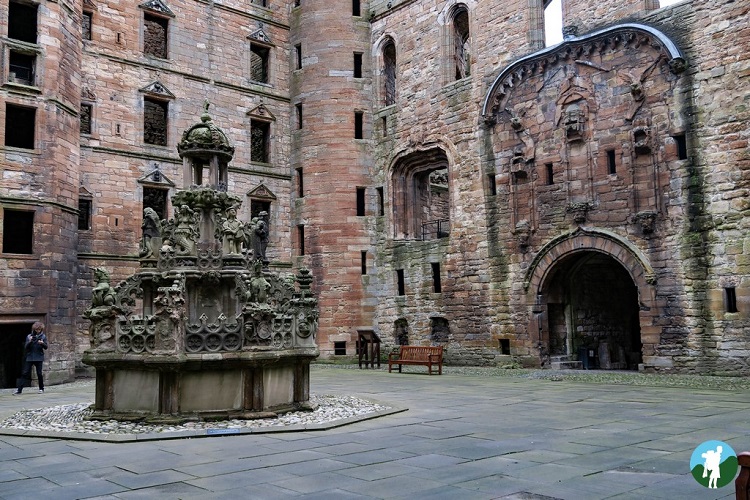 I’d love to see Linlithgow Palace get an upgrade. It’s a hollow shell of what it clearly once was and funding sent its way over recent decades has been limited. Were it to be shown as much love as an Edinburgh Castle or a Stirling Castle, I’m quite sure it would be rewarded in visitor numbers. As it is, it’s got the atmosphere, the scale, the grandeur and the charisma of a titan and is still one of Scotland’s most impressive structures.

Why is it that school trips live so long in the memory? It doesn’t seem to matter how much time passes, I bet everyone can recall at least one school trip from their youth. Among my most prominent was wee me’s visit to Blackness Castle in Primary School. Even now, I vividly remember how grim I found the place. Draftily plopped on the banks of the River Forth and with a dark soul of an appearance, it really is a brute.

A 15th Century residence, it was built for the powerful Crichton family, the same ones from above. Although its intentions were as a home fit for a lord, it ended up also serving as a state prison and artillery depot. ‘The ship that never sailed’ it is called, with its intriguing shape best appreciated from above. A tough nut to crack, guess who showed up in 1650 with siege guns to leave it permanently damaged? 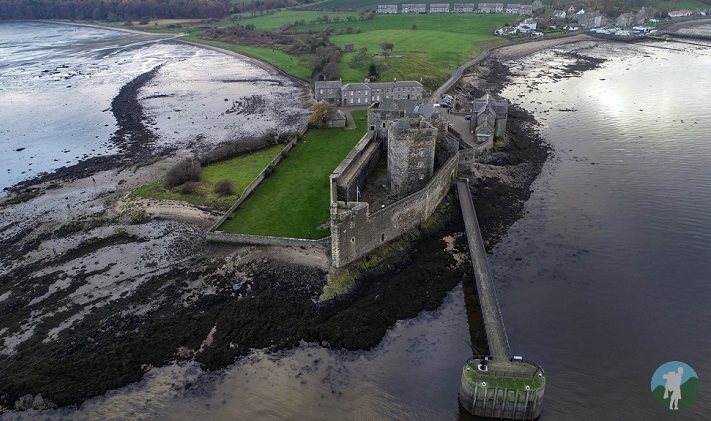 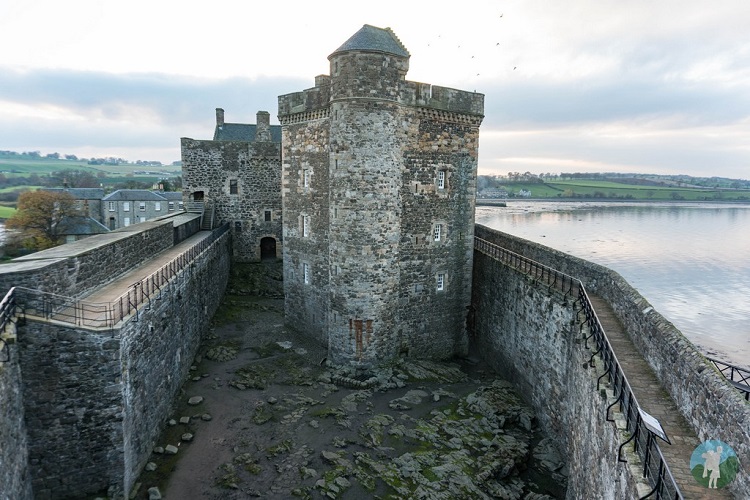 In a recurring theme for the castles near Edinburgh, Blackness has shot to renewed interest with starring roles in all three of Outlander, Outlaw King and Mary Queen of Scots in recent times as its once largely forgotten status has been stratospherically revived, in terms of visitor numbers anyway. With a completely different feel to majestic Linlithgow Palace, these two put West Lothian firmly on the history hunter’s map.

Nearby Hopetoun House (and its outlying Midhope ‘Lallybroch’ Castle) are other castles of a different kind in the area.

Which Castle is for you?

A visit to Scotland without a castle on your itinerary seems glaringly incomplete. I’m simply not having it. Who does castles better than Scotland? None of these castles near Edinburgh occupy the big-hitter tourism status of the likes of Eilean Donan, Stirling, Dunnottar or Urquhart, but they are all fast closing the gap. Film tourism is doing its thing and bringing them into the spotlight. Whether as day trips from the capital or as part of extended sojourns around Scotland, their secrets are just begging to be explored.