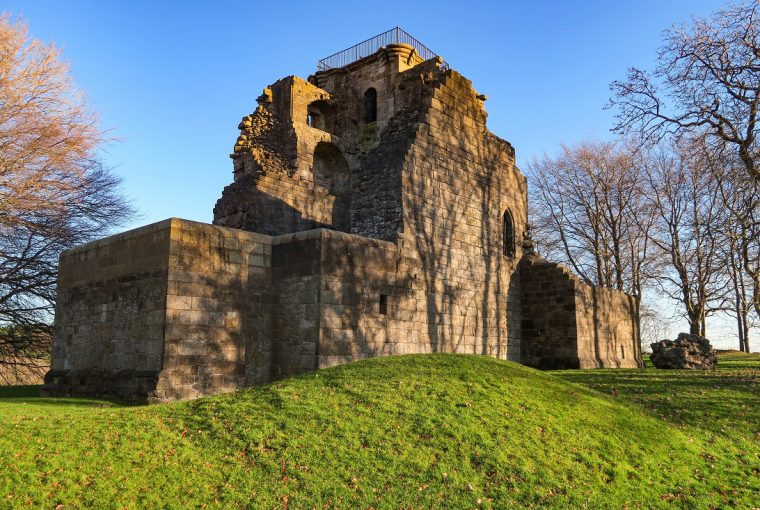 Exploring the Castles Near Glasgow

With the rain lashing off the windows, the heating creeping on and darkness storming in by 4pm, I’m going to spend the next several weeks fairly close to home. While that would throw most instinctive travellers into something of a tantrum, I couldn’t be happier. My home city of Glasgow is my favourite place in the world. Sure I’ll take it for granted from time to time, but it gives me an enormous sense of comfort to know that I’m where I belong in the world. It’s where life started for me and I love getting to know more and more about its appeal, old and new. In the first of several Glasgow-centered posts, I stick to a favourite topic in the form of charismatic ruins. Even to seasoned Scotland fans, a look at the castles near Glasgow throws up a surprise or two….

None of these guys get enough coverage. Several don’t even appear in any of the leading guidebooks. All are within 30 minutes (ish) driving time of our largest city. Oh…and they’re all brilliant.

I always think of Bothwell as Glasgow’s Castle. It’s a stretch (it’s around 10 miles away in South Lanarkshire) but given that the Clyde runs directly by it, the river keeps the two connected. A glowing red sandstone ruin, it is in just the right state of repair to inspire historians and photographers alike. Rectangular and fitting my particular criteria to be called a ‘proper’ castle, the cylindrical donjon (keep) and mighty placement make it home to many, many stories. 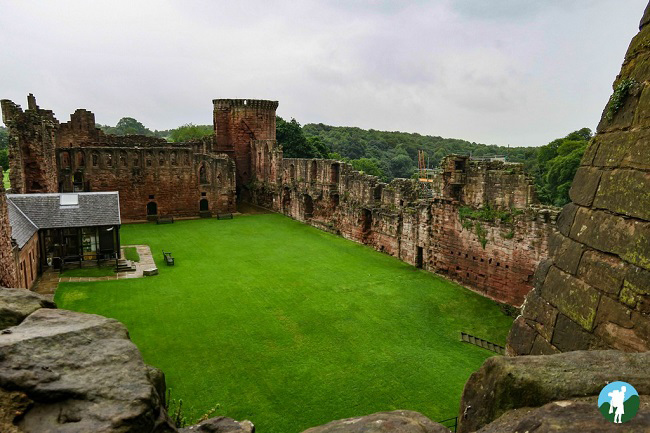 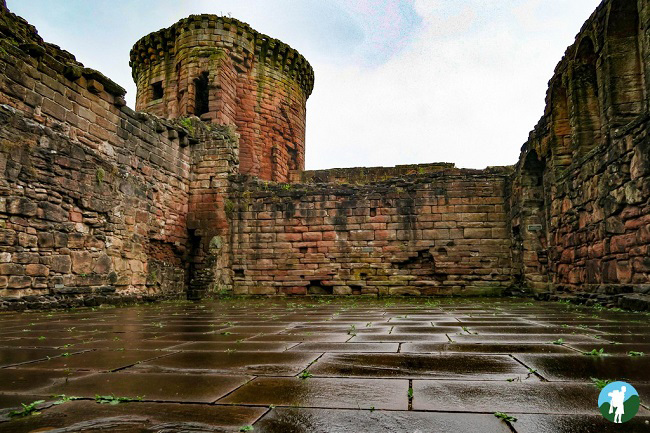 Shortly after Bothwell Castle’s birth, it was plunged inopportunely straight into the Wars of Independence. The foundations were barely in place when Edward I of England thought it’d be a good idea to invade Scotland and plunge Britain into a conflict that remains rich in infamy and dread. Scottish historical legends like William Wallace and Robert the Bruce were ultimately to be propelled into immortality but, for Bothwell, it bore the brunt of numerous sieges. Occupied by alternating English and Scottish forces it was even the base for Edward’s Warden of Scotland, Aymer de Valence. Think Game of Thrones and the northern fortress of Winterfell.

Following the Battle of Bannockburn in 1314, Bothwell was a temporary sanctuary for the defeated English troops. In 1336 it once again became an English base before once more being besieged by the Scots and left derelict. Clearly our southern neighbours saw its geographic significance and advantage. 15th Century construction under the Douglases saw more peaceful times before it was eventually abandoned by the 18th Century.

The setting of Dumbarton Castle is really quite ludicrous. The random mound that is Dumbarton Rock has a beautiful placement aside the point where the River Clyde opens up to join our maze of west coast waters.  On a sunny day the views from the multiple summits are spectacular. The ever-expanding metropolis of Glasgow dominates to the east and the promise of the isles lies to the west. The peaks around Loch Lomond can also be spotted to the north – an advantageous location indeed. Of the castles near Glasgow, it has to be the most dramatically set. 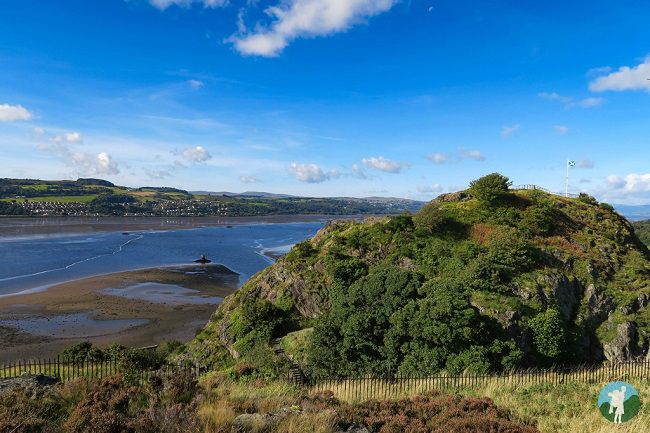 Having seen it all over the centuries, Vikings have laid siege in 871, William Wallace was likely imprisoned here, James IV laid siege in late medieval times, Mary Queen of Scots was a repeat visitor and numerous prisoners from the Jacobite and Napoleonic Wars were held here. Very much a military fortification it held strategic importance given its proximity to the Hebridean Isles. Our Scandinavian friends in particular held a vested interest over much of our outlying territories, making Dumbarton a place of interest. Dumbarton Castle stood very much at the centre of the Kingdom of Strathclyde and guarded over south west Scotland.

Quite how any sort of man-made structure could have survived over the centuries defies belief. The umpteen sieges and full exposure to west of Scotland weather add to the mystery. And yet, Dumbarton Castle is arguably one of the most historically significant ruins we’ve got. 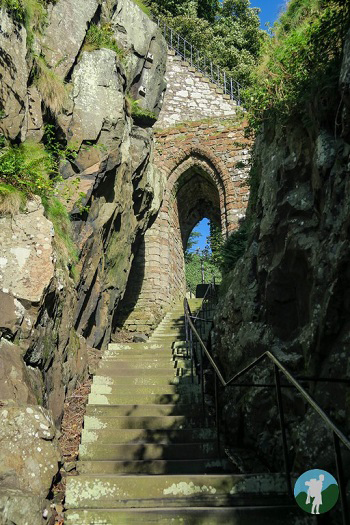 I’ve already said that I see Bothwell as “Glasgow’s castle”….that’s maybe a tad unfair. Crookston to the south west of the city is closer and around just 15 minutes from the centre by car. Set atop a mound in what is now a residential area, the ruins have an allure and mystery that begs for exploration.

Although an early 15th Century castle, there are signs of activity here several hundred years preceding that. You’d think missing the Wars of Independence would have exempted Crookston Castle from the worst of our brutal history but it still endured a couple of major sieges. James IV successfully bombarded it with Mons Meg (the mother of all cannons) in 1489. It was attacked again in 1544 as claims to the Scottish throne gathered momentum. Most famously during this period, Crookston is believed to have been a courting place for Mary Queen of Scots and her second husband, Lord Darnley. As with pretty much everything in Scottish history, it was not destined for a happily ever after. You can read more about Mary’s castle stalking on my castles near Edinburgh blog. 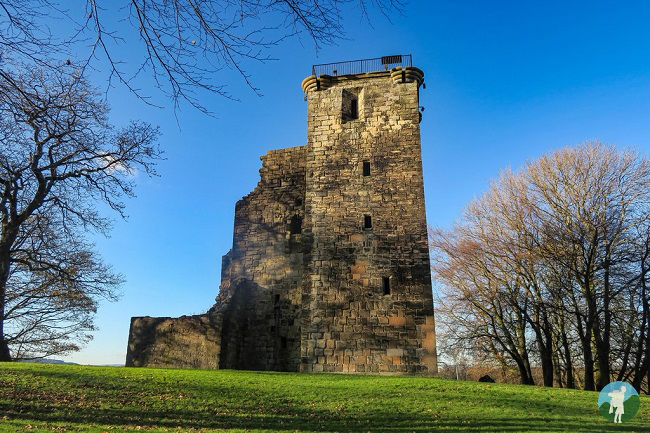 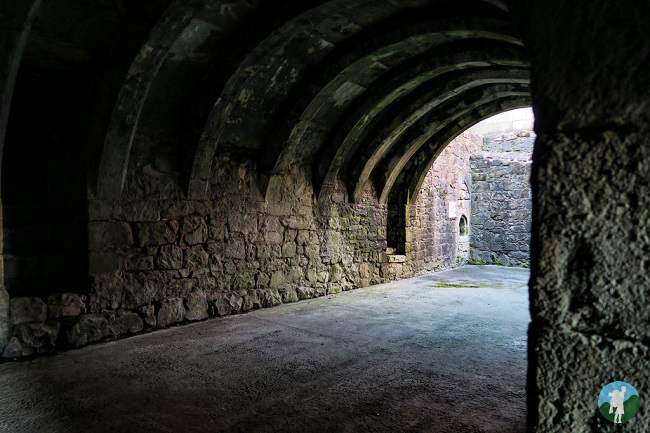 A sturdy rectangular ruin, what remains is in excellent condition. A giant fireplace dominates the main hall and 4 stories still stand. Panoramic views from up top and a poke around the dingy storage basement levels are the highlights.

Lanarkshire is way off the majority of tourists’ itineraries at the best of times – making Craignethan a gem for the castle aficionados out there. A remote and peaceful spot around 35 minutes from Glasgow, its spacious courtyard in particular makes it fairly unique in my experience. My first visit some years ago saw me test my archery skills – added value to any visit and hopefully something that will make a re-appearance. It proudly claims to be the last private castle built in Scotland with a defensive capability. 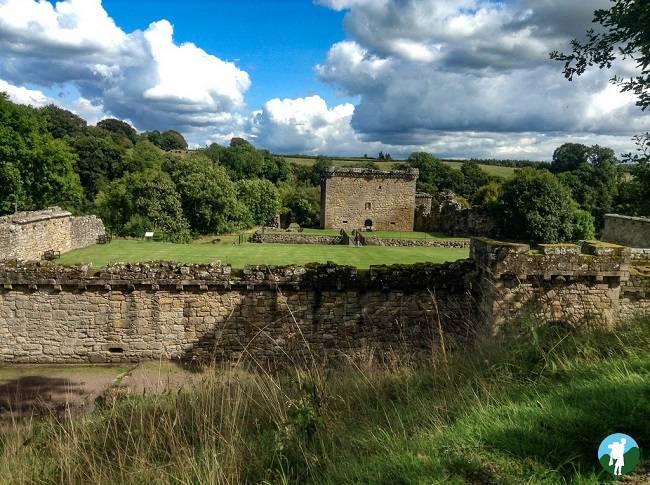 A 16th Century ruin, Craignethan roars in the aesthetic department having not endured major military sieges in its lifetime. Designed by Sir James Hamilton of Finnart – a talented and well-travelled architect – and as head of his family he even got to entertain James V here in 1536. As supporters of Mary Queen of Scots however, the castle and its owners got into the Crown’s bad books. Largely as a result of this, it has been a ruin since 1579. I’d like to include nearby Cadzow Castle in this list as it is nearer to Glasgow than Craignethan – but access is extremely limited and very little remains to be seen.

I’m cheating now. I know, but I can’t help it. Stirling Castle is a little over 30 minutes from Glasgow by car. But it is such a giant in Scottish history and modern-day Scottish tourism that I feel obligated to squeeze it in. Strategically insurmountable since prehistoric times, the massive fortress is at least a half-day activity in its own right. The Great Hall will have you visually recreating royal feasts. The Royal Palace and stunning tapestries will leave you applauding the work of our historic overseers. A wander around the ramparts delivers an unforgettable panorama over much of Central Scotland and terrific views north to the Ochil Hills. The Southern Highlands beckon beyond them. Stirling Castle just has it all. 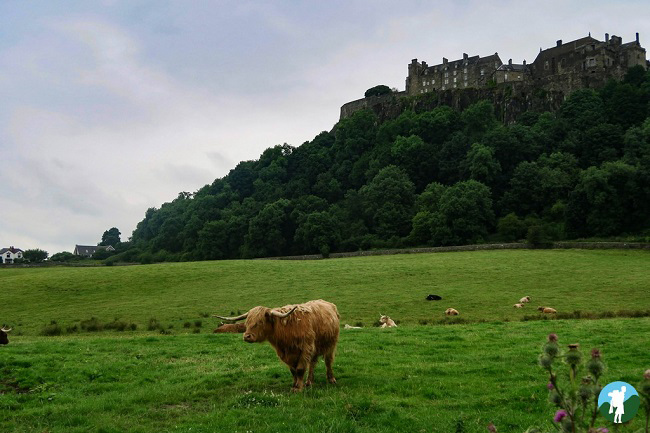 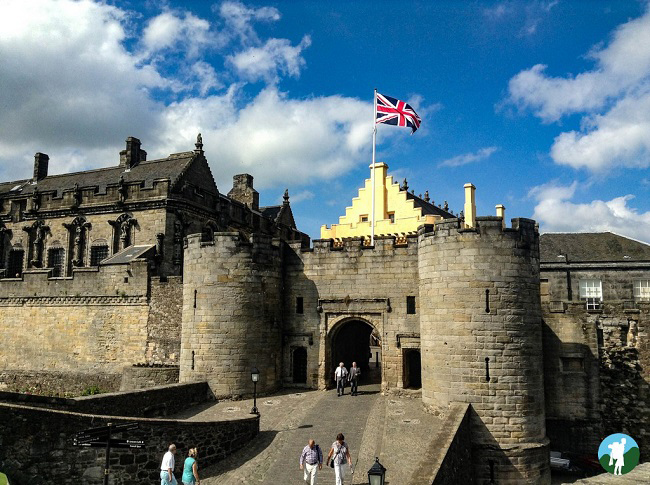 It’s amazing what you can find on your doorstep, wouldn’t you agree? Castles near Glasgow was a topic I’ve been looking to cover for ages and even the majority of Glaswegians will be seeing some of these guys for the first time I suspect. For regular followers of my blog who are perhaps thinking of heading further afield, check out two itineraries that I’ve been working on over the last couple of weeks. My ultimate Scottish road trip looks at a packed schedule of highlights over 3 weeks while my Southern Scotland itinerary delves into the depths of probably our most underrated regions. Enjoy!

Scotland from a Different Perspective

A Review of the Best Glasgow West End Restaurants