Travels with a Kilt
Highlands ScotlandScotland on the Coast 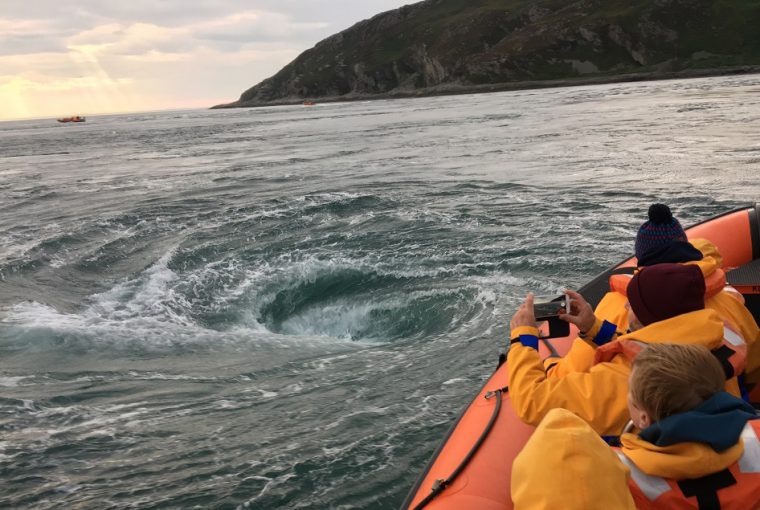 It’s one of Scotland’s natural wonders. A powerful beast that lends yet further foreboding and awe to a western coastline that hardly needs it. The fearsomely named Corryvreckan belongs on the tele. Playing centre stage in a Game of Thrones or a Vikings, such is it’s unusual and intimidating presence and sense of fantastic impossibility. The world’s third largest whirlpool is a maelstrom of watery chaos just off the Isle of Jura and a Corryvreckan boat trip has long been on my list as I’ve sought to cast my own eye over the beast.

But before I get to today’s end destination in the Sound of Jura, I decide this is an opportunity to make this one a day to remember. 2017 was a year of multiple Argyll road trips for me as I took on this vast and astonishing segment of the Southern Highlands. Historically overflowing and bursting with densely packed peaks and stretching lochs it probably is my favourite day trip area from Glasgow and its no surprise that I’m returning this year for more.

Despite the conveyor belt of tour buses that frequent little Inveraray, the village and its dominating castle still hold an effortlessly romantic appeal. Going back to the 15th Century, this has been the HQ for the Dukes of Argyll – Clan Campbell – and today’s 18th Century palace has probably caused no end of near misses for drivers on arrival. The town’s eastern bridge offers an astonishing first glimpse at this bizarrely opulent mansion that would be right at home on a Disney set. An almost equally grand interior offers a look at the other side to Highland history and the power of the Clans over the land and its inhabitants. You can also read more about Dun a Cuaiche – a stunning walk and vista that overlooks Loch Fyne and the castle – here. 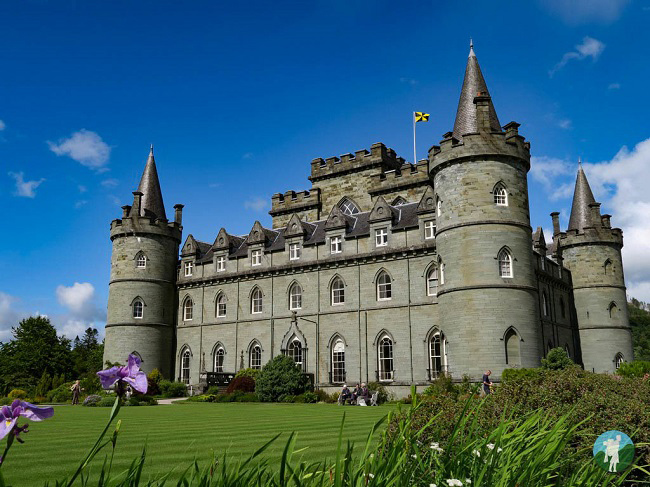 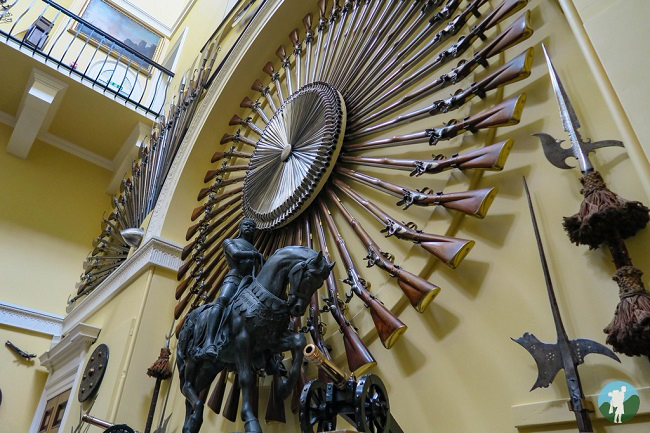 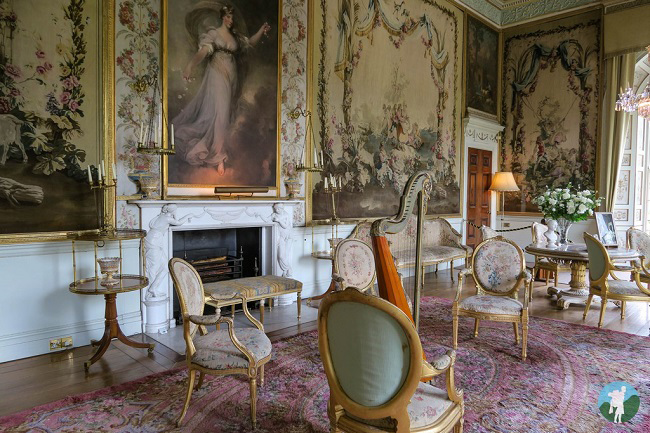 Almost slamming on the brakes as I continued my road trip west alongside Loch Fyne, my next stop is one that I have criminally overlooked in the past. The superbly authentic township at Auchindrain Folk Museum is our best-preserved step-back-in-time example of Highland farm life. A touching and tasteful look at the simplicity and harshness of farm existence, the smattering of buildings are spread over 22 acres and require about an hour or so to experience. Set among what must be one of the wettest areas of Scotland, it’s a fitting nod to what was a pivotal chapter in Scottish societal development…long before the times of urban sprawls, trading routes and diverse employment opportunities. Tablet guides are provided as part of your tour, snacks and gifts are available on-site and the welcome was one of the warmest I can remember. 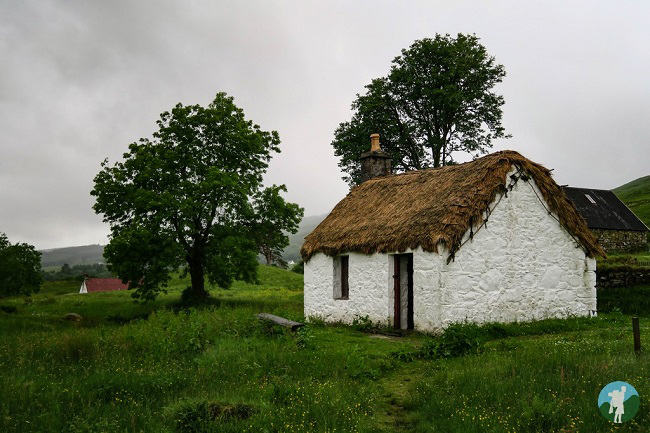 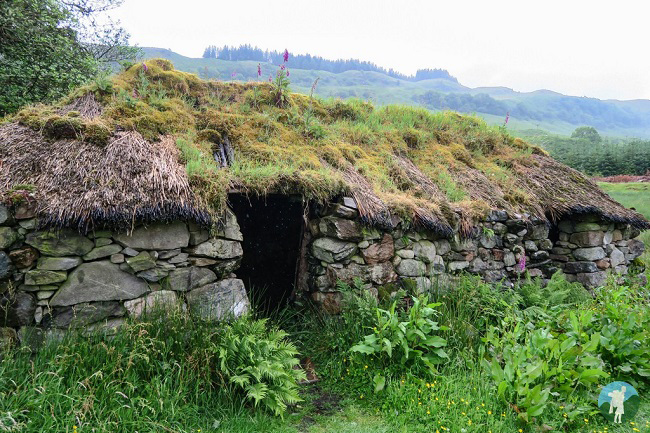 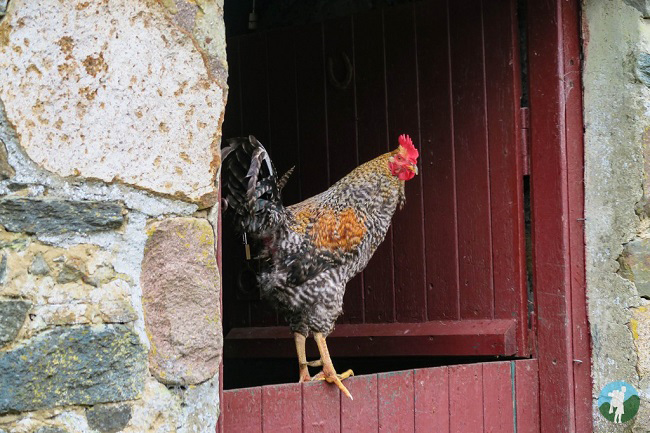 Working your way up the largely empty west coast of mainland Argyll is a joy to behold. And Kilmartin is one of those areas that presents something of a magnetic draw. Its mighty standing stones are amongst our finest remaining examples. Carnasserie Castle holds all of the grumpy aura that Scotland’s ruins specialise in. Temple Wood has a swarm of mysterious confusion lingering above it. The barely-there hill fort of Dunadd – the original seat of power for the 6th Century kings of ancient Dal Riata – is a prehistoric masterpiece with a view. The mind just boggles at the concentration of these ancient treasures that litter this area. 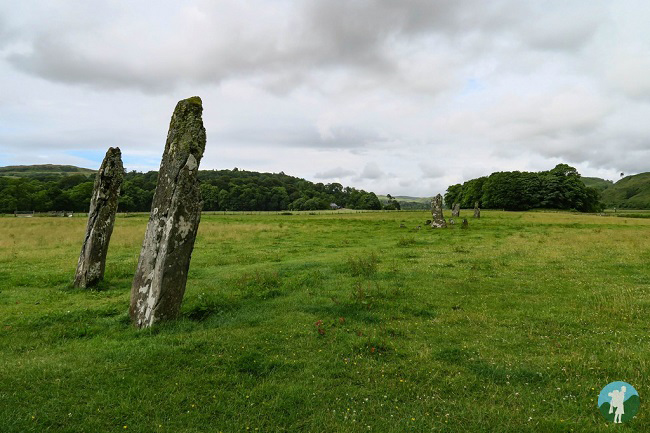 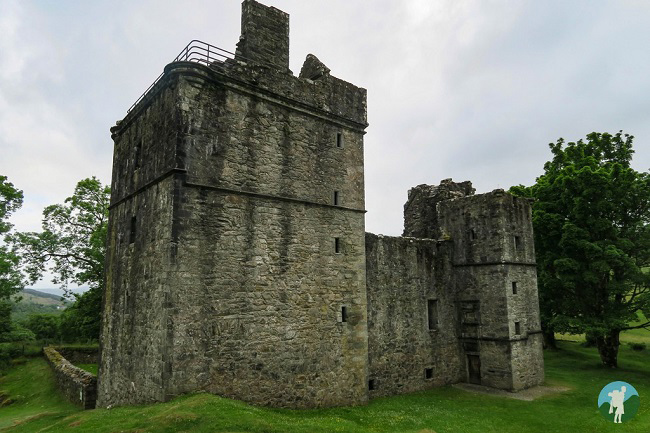 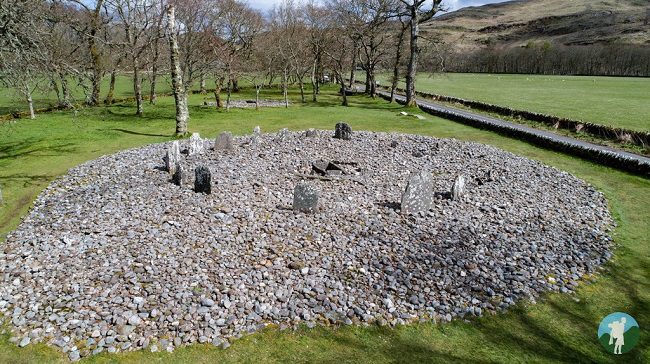 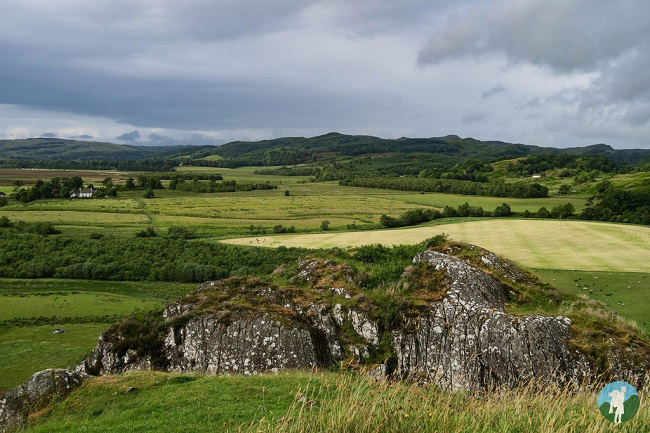 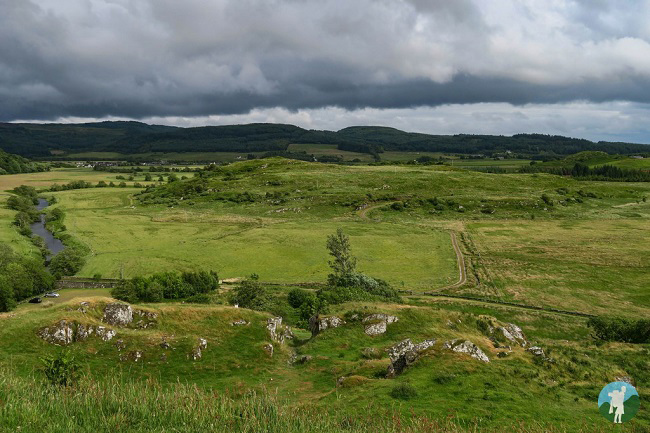 Heading to the Sound of Jura on a Corryvreckan Boat Trip

I was fortunate to finally be able to visit this eternal objective of mine through an invitation from Seafari Adventures. Offering multiple boat trip opportunities in the area, their Corryvreckan Whirlpool Special was one I just couldn’t look past. Around 2 hours is required to head from their base on the Isle of Seil into the Gulf of Corryvreckan. You’ll be kitted up from head to toe in waterproofs and layers and these guys are total pros at delivering an unforgettable experience. Towards the more thrilling end of the spectrum as boat torus go, Captain Steve will test your mettle with some creative cruising throughout and be sure to hang onto your hats! Of the kind of scream-if-you-wanna-go-faster variety that I have to say I couldn’t get enough of. Going at great speed on the RIBs the journey flies in and the occasional salt water splash in the face only adds to the rawness of this incredible experience. Be advised these tours are extremely time sensitive to catch the Whirlpool doing its thing and only around 30 tours run per season. Wear multiple layers and fully expect to get a little wet. 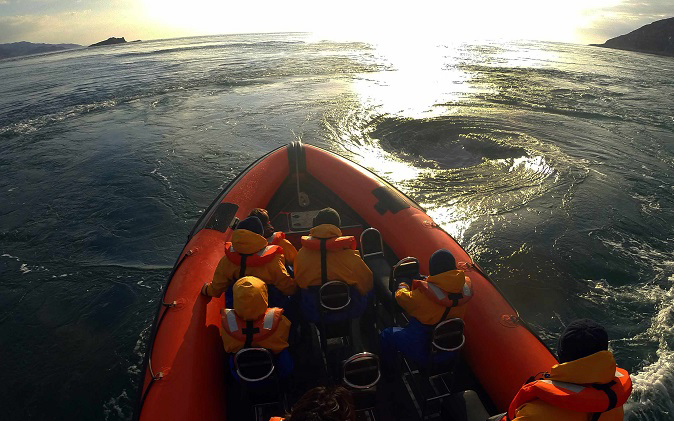 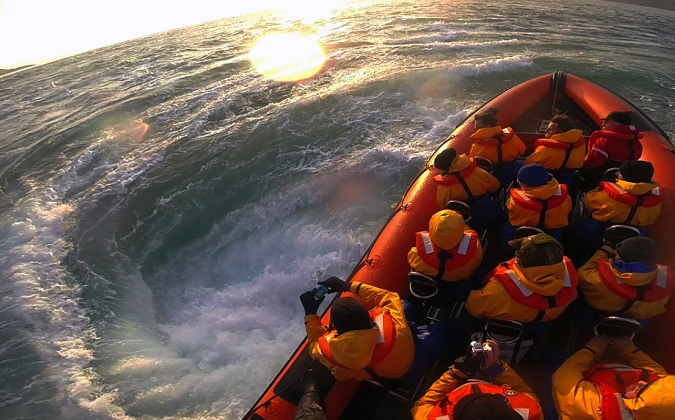 As to what the Corryvreckan Whirlpool actually is….it forms when moving water, connected to the gravitational effect of the sun and moon, meets an underwater pinnacle. This underwater chaos causes a swirling effect and this stretch of the Corryvreckan is around a mile wide. It’s not like one giant plughole but a large series of constantly moving swirls, waves and overfalls that your boat tour will travel between to give passengers plenty of opportunity to get swished around amidst it all. It is thought that there is a greater volume of water here in the Gulf of Corryvreckan during spring (the time to come) than passes from the mouth of the Amazon. Doing it, as I did, as the last of the day’s light departed was atmospherically magnificent. 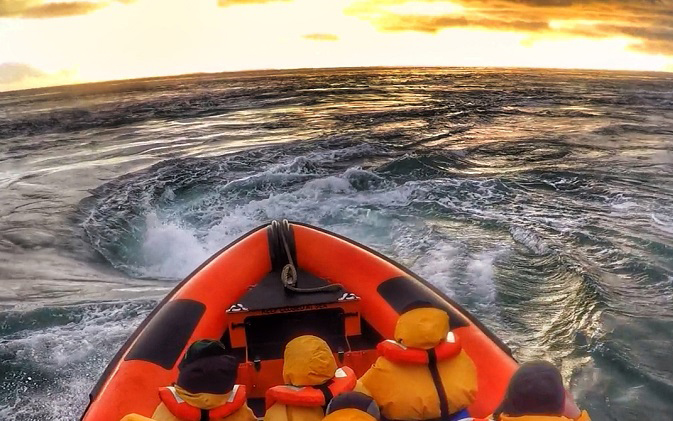 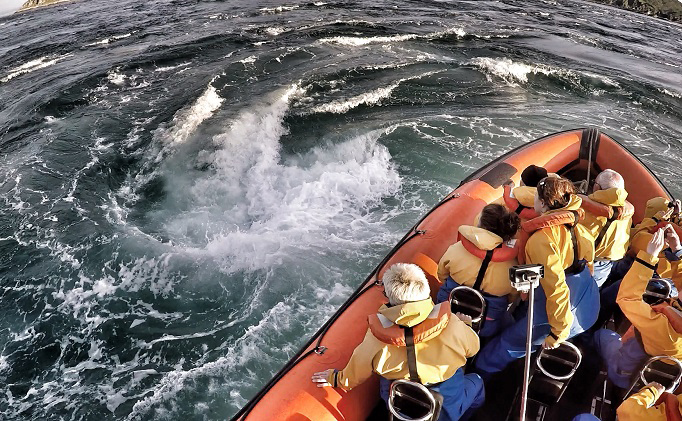 Remote and sparsely-populated Jura is the perfect backdrop to this natural phenomenon. Home to a whisky distillery – and very little else – it is the island made famous as the lonely place for George Orwell to pen 1984. Clearly in need of some solitude and scenic inspiration, he could hardly have chosen more wisely. The same cannot, perhaps, be said for his judgement in the recreational department. Taking his son, niece and nephew on a Corryvreckan boat trip of his own while still writing the book, he dangerously misjudged the tides and their dingy was capsized. Fortunately, the life-jacketless family were rescued by passing fishermen – but came perilously close to death in the Corryvreckan’s treacherous waters.

And with that, I’ll let your imagination do the rest…

Although I was invited as a guest by Seafari to enjoy their Corryvreckan boat tour, this review is based entirely on my experience and total enjoyment of what is a brilliant trip.

A Day Out with the Scottish Seabird Centre