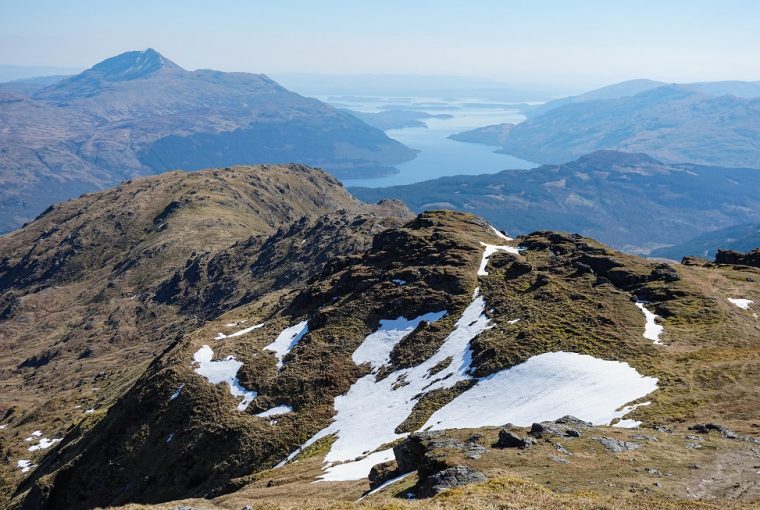 I’ve been feeling a bit cabin feverey lately. It’s the time of year when I’m always consumed with things like event speaking during Scottish Tourism Month, blog trip planning and strategic prioritising for which direction I want to swing my work this year. The result is spending my time almost entirely in towns and cities meeting people, digitally analysing just about everything and stroking my beard in perpetually deep contemplation. Added to the fact that spring has had multiple false starts already and I’m absolutely aching for the outdoors. The mountains, and some Loch Lomond walks, are calling.

I’ve been out to the Loch at least half a dozen times this year already for the short trip, quick fixes that my type require to ride out the last of the winter. You see, it’s just there. Sat delightfully to the north west of Glasgow, you’ve barely left the city limits before the fresh air and Highland promise hits you and all is very quickly well again. So, for those looking to dip the toe with some springtime exploration, or those making comprehensive Highland plans for the summer, here’s a few options to mull over…..

Ask the majority of Munro baggers out there where their hill-going adventures began and a huge chunk will nostalgically reflect on novice wanders up ‘Glasgow’s Mountain’. Straightforward throughout and without the faff required for more remote peaks, this will provide the confidence to trigger an imminent mountain addiction. 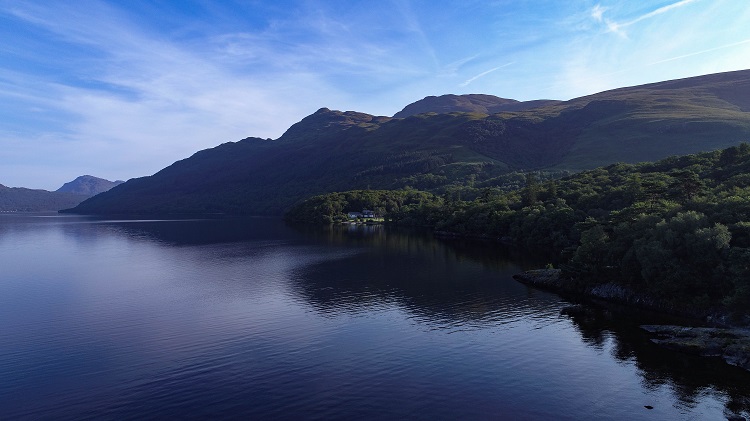 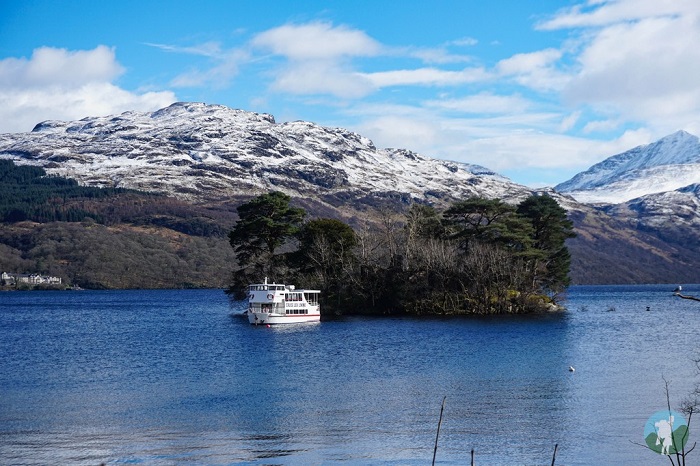 The Ben completely dominates the Loch in that ‘I’m-watching-you-young-man’ manner that I’ve come to love. As a mountain, I think it’s best appreciated from the western side of the water looking over but, to get to know Loch Lomond as a whole, you’ll never do finer than from the summit. Long and narrow with a smattering of little islands as decoration, it’s not been bonnie all these years for nothing.

The easiest place to start is Rowardennan car park and follow your nose for a relaxed 5-hour round trip. A joy on a sunny day, it is very exposed on the incline so dress appropriately for wind and rain if Scotland’s weather gods are in their usual mood. For something a bit more challenging, rope in the Ptarmigan ridge on either the up or down to form a more interesting circuit. 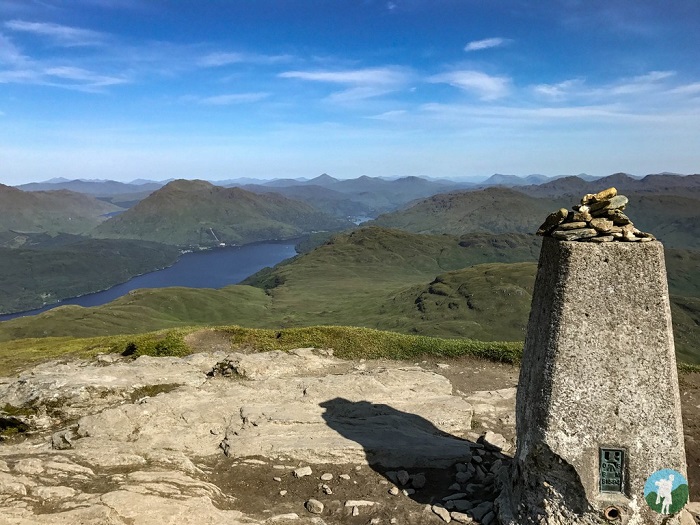 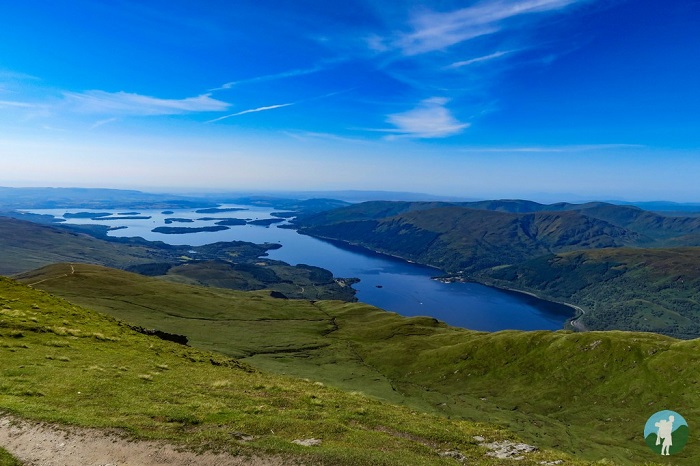 While Ben Lomond is a campfire favourite, known to all, the Loch’s other Munro holds much less renown. Strange really, given that it is just as accessible and probably even more rewarding. My first hike of the spring sees me take on Ben Vorlich (not to be confused with the hill of the same name in Perthshire). 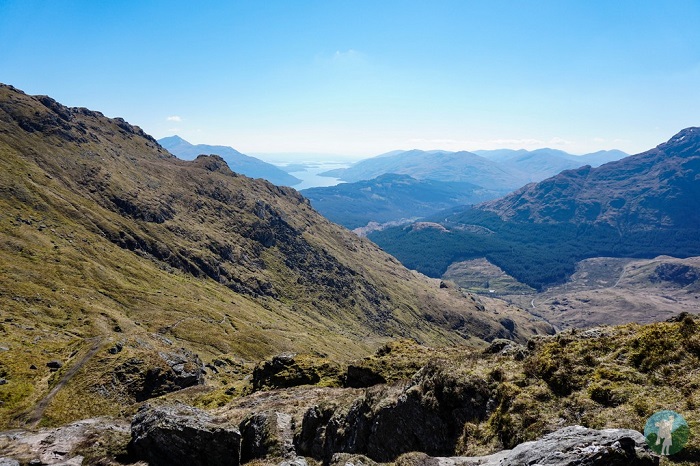 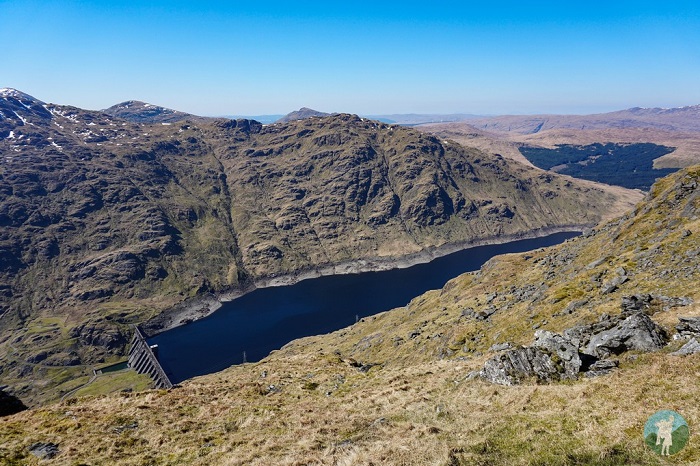 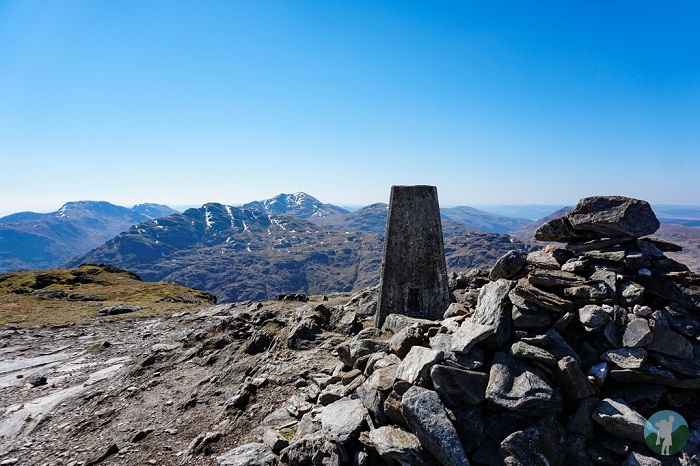 Locals will be familiar with this guy but you’ll do well to hear a non-Scottish accent on this climb as it’s managed to quietly avoid radar detection for the most part. There are a few ways to tackle him but I opted for the western approach from the rear, overlooking the Loch Sloy reservoir. It’s tough going, this. Perhaps it was the remnants of winter rust, or the daft amount of photography gear I was carrying, but the steepness of the clamber had me digging deeper than usual over this 5.5-hour round trip. The rewards are all around though as the denseness of the Southern Highland limits start to take shape.

Expect glorious views from the ridge south over the Loch and its pointy Ben. Every other direction holds a riot of peaks of all shapes and sizes. Although technically one of the Arrochar Alps, I view Ben Vorlich as separate to the others and the bridge point between Loch Lomond and the start of Argyll. Combined with its slightly bigger brother, these two Loch Lomond walks will leave you on much closer terms with the National Park. 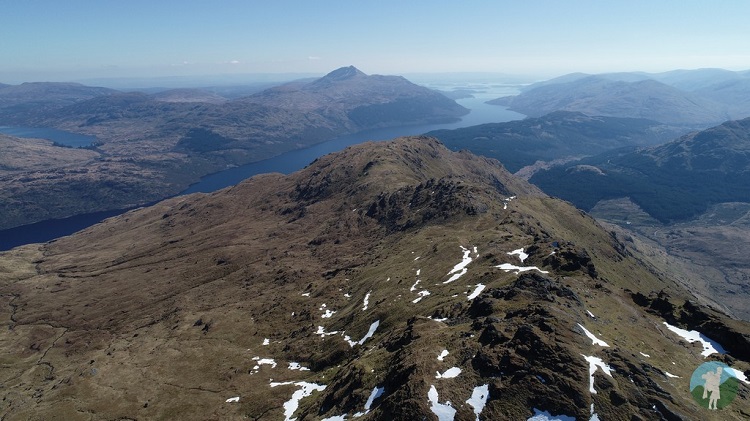 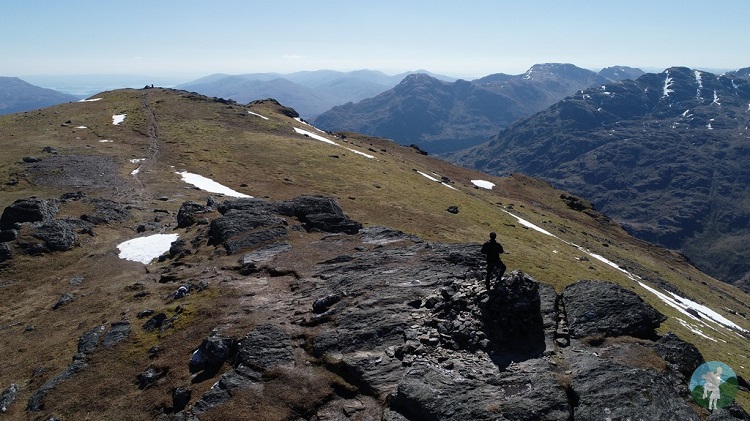 There are literally dozens of options for walking in the National Park, which was Scotland’s first by the way. Conic Hill, if you don’t mind the crowds, is the pick of the bunch on the eastern shore to the south of Ben Lomond. It’ll give you a better look over those little islets than its neighbour and is another great one for building early confidence.

For the west, I’d nudge you towards the Luss Hills, where the crowds are non-existent. Despite the immediate proximity to little Luss that can barely hold the droves that stop off here between destinations, very few of them bother to actually leave the village. Rub your hands with devilish glee and break from the mould. 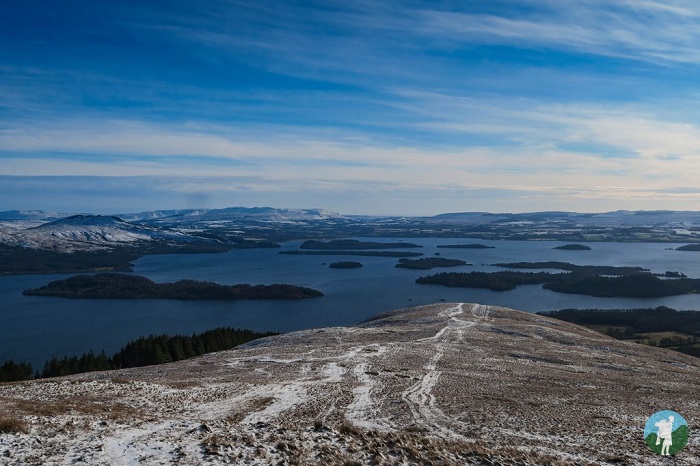 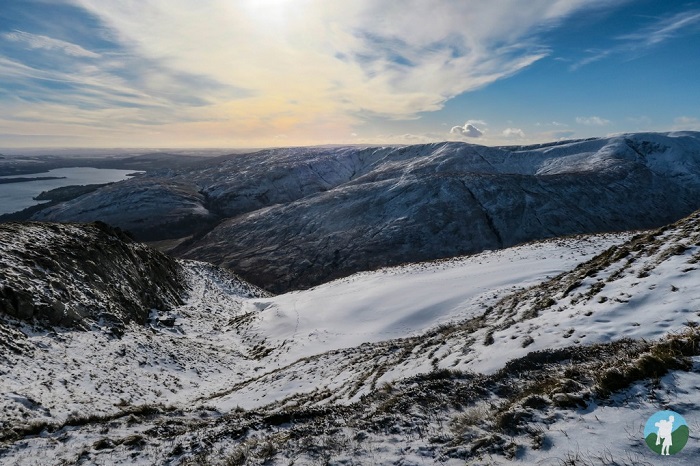 Further north, the other Arrochar Alps beckon while The Trossachs are calling to the east. Both areas are densely rural, resplendent in the summer seasons and home to all sorts of wildlife. You could literally spend a fortnight’s holiday just exploring around here, it has that much to offer.

A new venture that I’ve recently become aware of offers a superb alternative approach to exploration of Loch Lomond. 4×4 Adventures Scotland provide off-road driving north of Luss for those with both a passion for thrills and for unearthing the hidden secrets of Highland glens. Taking routes that even the most seasoned local experts will never have traversed, their sturdy fleet takes passengers to superb unspoilt vantage points over both Loch Lomond and Loch Long to the further west. 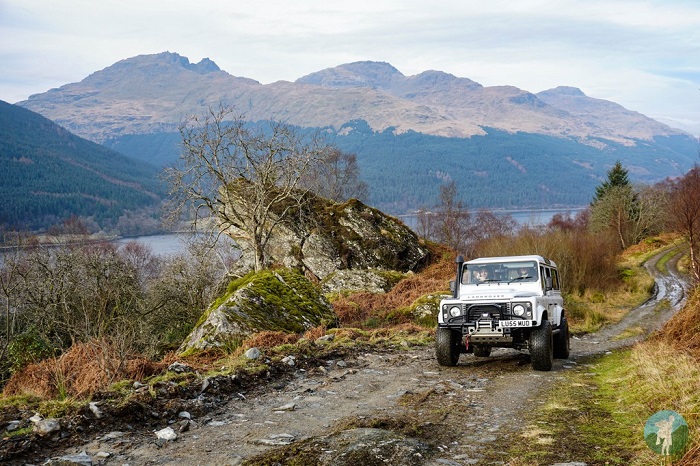 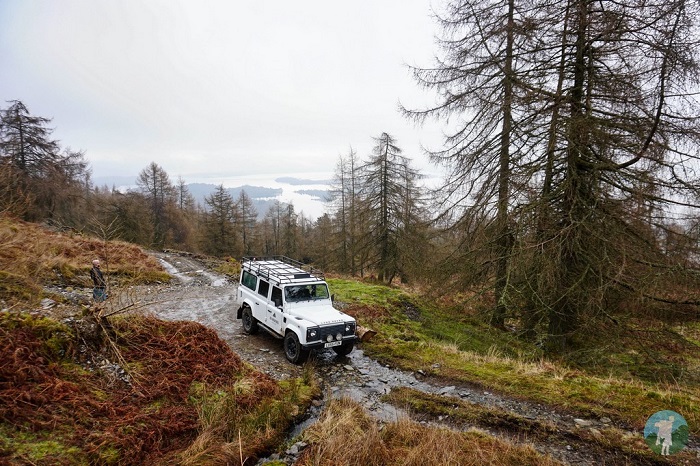 Should you wish you can even get behind the wheel yourself! Tough but thrilling, I became aware that my jaw had locked itself into something between a strained grimace and a gleeful grin throughout. Under the expert supervision of a lovely team of local guys, these are the kinds of businesses I love to recommend. First class Scottish service offering something unique, innovative and fuelled by passion.

Although I was invited to experience a day on the hills with 4×4 Adventures Scotland, this endorsement is entirely justified based on a great day out doing something I’d never tried before and that was a huge amount of fun.

And for something more relaxed….

While the Park is inescapably about the outdoors, there are some tucked away historical powerhouses too. This is Rob Roy territory of course and you can still visit the defiant MacGregor’s grave in Balquhidder.

Or there’s the serenely beautiful Inchmahome Priory, islanded on the Lake of Menteith. These spiritual ruins are reminiscent of Loch Leven Castle, Inchcolm Island and even Iona in their presence and setting. A young Mary, Queen of Scots was sent here in 1547 for safekeeping during the ‘Rough Wooing’ being overseen by Henry VIII. Robert the Bruce was also a repeat visitor, presumably chilling out between scraps with the English. 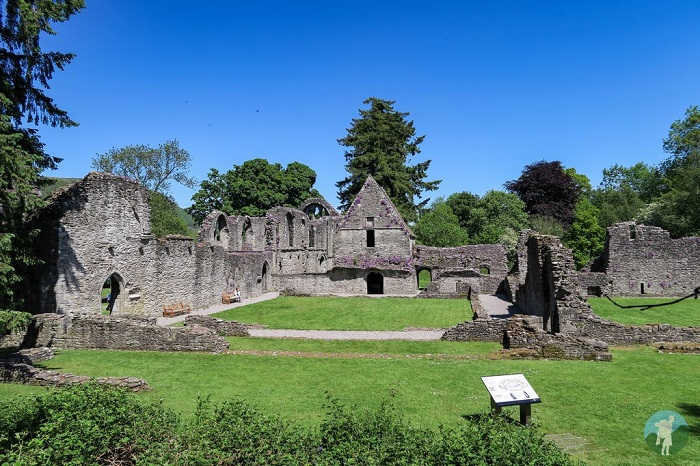 A quick update on where I’ve been hiding

Although I have been extremely quiet these last few weeks on the blog front, big things are afoot. I will imminently be able to announce the details of a new podcast series as well as some new, carefully selected, partnerships and campaigns coming up in 2019. The former will be my primary focus for the next month or two and the latter will see me repeatedly hitting plenty of fabulous locations including the Inner Hebrides, the North East and Southern Scotland over the tourism season.

I can promise that Scotland shan’t disappoint.

A Flying Trip to the Whisky Island