Travels with a Kilt
Popular PostsWalking in Scotland 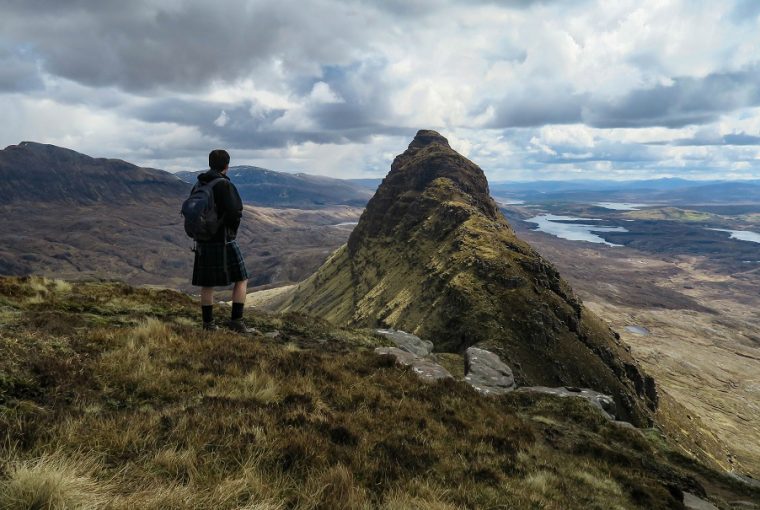 Lochinver Walks – The Heart of Sutherland

The truth is there’s something about our mountains. If Scotland was an animal, there’s no doubt it’d be a lion. But not any old lion and not just because there’s one in our unofficial flag. It’d be a wise, elderly beast, one carrying the weight of a lifetime of effort and relentless contemplation. And a big soul, Scotland’s all about soul. I don’t think this soul is embodied any more intensely than by our mountains. And, based on my recent trip to Lochinver, I’m starting to conclude that nowhere does them better than Sutherland.

So I’ve been enjoying something of a reflective period about our mountains. Last month’s travels in Sutherland unfortunately saw me receive some tragic news – the life-changing kind that takes your breath away and crushes you with sadness and heartbreak. The details of that are personal and certainly have no place in a travel blog but I just so happened to be hiking at Loch Maree when this news reached me. I suppose the instinct in such circumstances is to retreat – generally to your home comforts and a familiar, warm environment. But it occurred to me as this news started to sink in that, perhaps, I was already in the best place for me at that moment. I was in my beloved hills. Scotland’s hills, holders of centuries’ worth of secrets and pain. In my years walking them and blogging about them, I’ve felt a strong attachment and, in a strange way, I sense that they are on my side.

This is the strength of the Scottish Highlands. A strength particularly fierce in Sutherland. These are landscapes and atmospherics that made Walter Scott a legend and, while they spend most of their days slumbering and pensively monitoring, they can’t half roar when they want to. Which neatly sums up the typical personality of your average Scot, come to think of it. Cautious, stoic and reserved by and large, our paradoxical alter-egos scream passion. Just go to a rugby game at Murrayfield, watch an Old Firm derby or look back at the recent rallies for independence or against Brexit. Complex, flawed and lovable. That’s us. And it’s our mountains too, except for the flawed part. 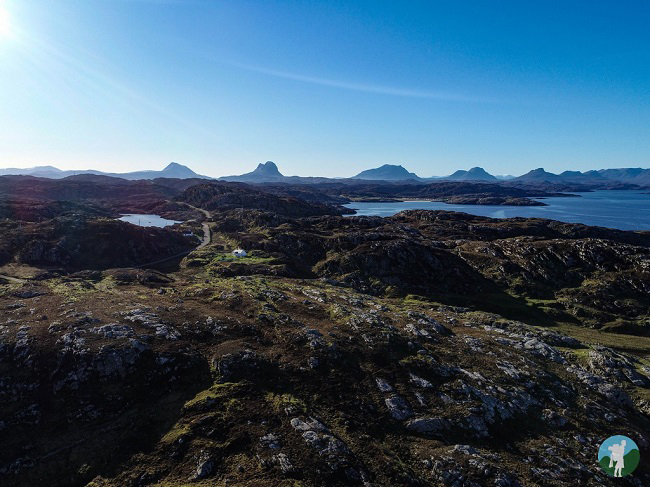 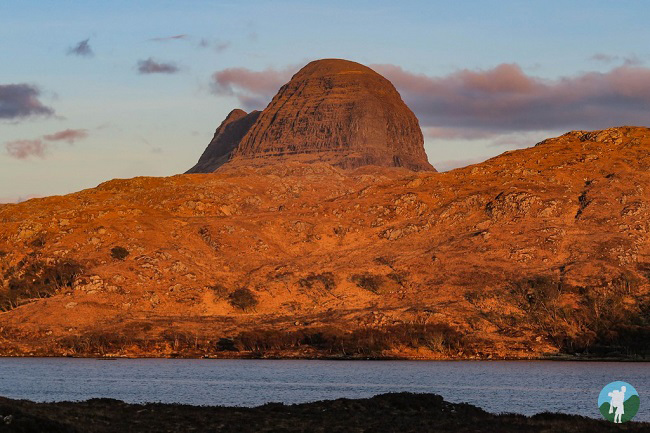 But while I’m away off gab-shiteing about parallels between Scots and their natural environment and what the mountains really mean to me, here they are in action. Sutherland, and the Lochinver area specifically, is home to several of the best hillwalking trails in the world and here’s a look at some of my favourites.

For those that have never climbed a Scottish mountain before this, along with the Trossachs’ Ben A’an, is probably the most logical place to start. Its fabulous effort vs reward ratio will ensure that you’ve caught the bug in no time, and our countless more challenging peaks will instantly seem much more appealing. A bit like Ben A’an, this guy is much easier than he looks. From its car park starting point it appears a cragged and inaccessible mound. Jagged peaks dot the ridge and its isolated and exposed nature leave you open to the elements. The reality is much less intimidating – Stac Pollaidh (Stack Polly) is only 613 metres, the straightforward and pathed ascent is from the other (not originally visible) side of the mound and it’s popular enough that you’re unlikely to be doing it alone. Oh, and the views throughout repay every step, with interest. 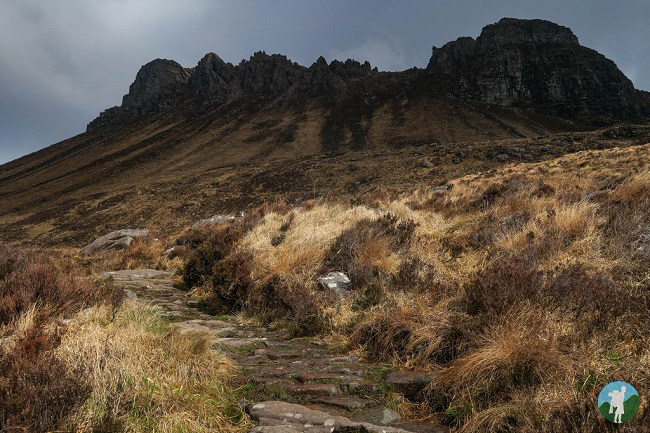 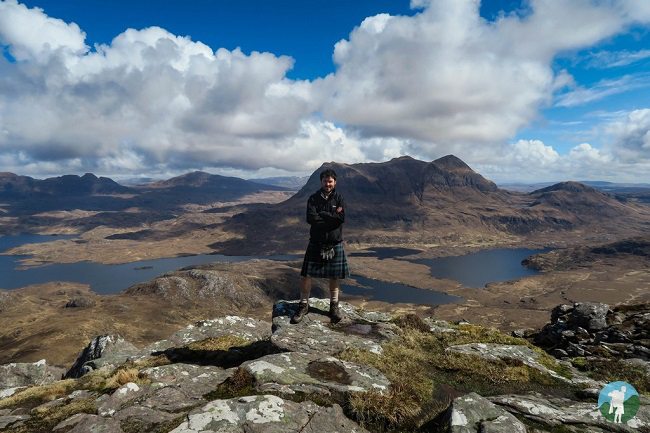 This decrepit old man of a hill can be circuited in around 3 hours return, which frankly seems unfair. Rewarded with huge views over the empty plains of Assynt, with just the odd tombstone-like giant to break things up, you won’t even feel as though you’ve earned your dinner. The western summit of Stac Pollaidh is, though, just for experienced climbers, so be advised there.

So that bit about not even earning your dinner……scratch that completely for Suilven. If Stac Pollaidh is the grouchy old man (and a secret softy), Suilven is his estranged, and highly reclusive, big brother. Booming over Assynt for miles in every direction, this distinct curved monolith is unquestionably one of Scotland’s natural icons. Again, it’s far from a giant at just 731 metres but has a gruelling walk-in that turns the ascent into an 8-hour return expedition. 5 of those hours are spent just getting between your vehicle (or Lochinver) and the foot of the mountain, with the climb actually relatively straightforward. From the summit, the genuinely breathtaking ridge encompasses both a dagger pinnacle and a giant rounded true summit. Barren moorland and rocks spread before you. Quite simply, this is the absolute definition of wilderness and other-worldly isolation. 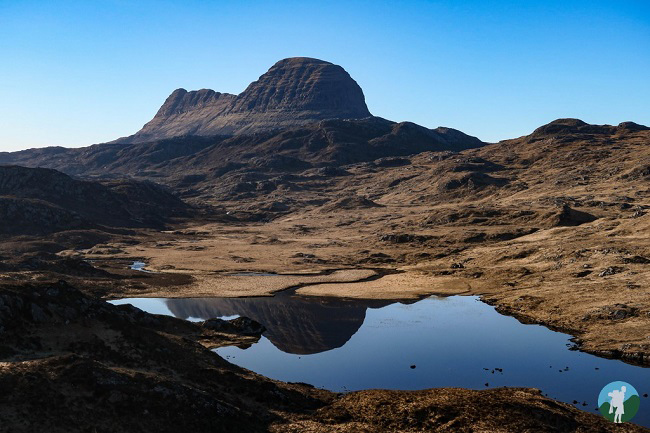 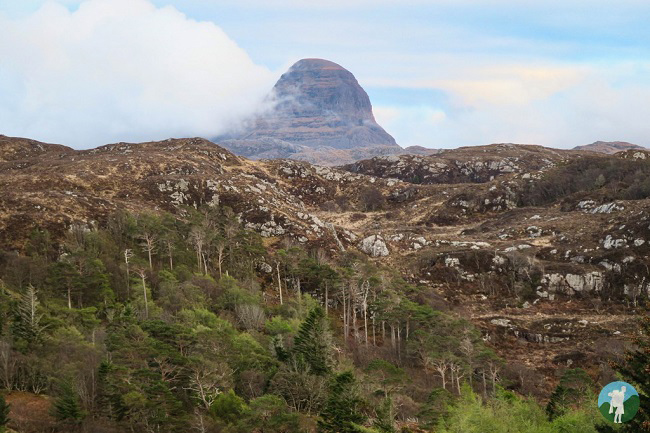 I don’t do the whole bucket list thing. I’m in my early 30s, it just doesn’t seem right. But, as mountains go, Suilven was always up there, even before this trip. Just catch a glimpse of it from Lochinver or have it sneak up on you on a coastal wander….its omnipresence in these parts make it an absolute must. You’ll save yourself considerable time by starting at the small car park on Canisp Road, east of Lochinver town. If it’s full then you’ll have to walk in all the way from Lochinver – which is not such a big deal going out but you’ll be cursing your lack of preparedness on the way back down I can assure you. That final stretch is not a lot of fun. Whenever your wearied legs start with the gyp though, just stop turn around and take a reminder look at one of the finest views you’re ever likely to see. 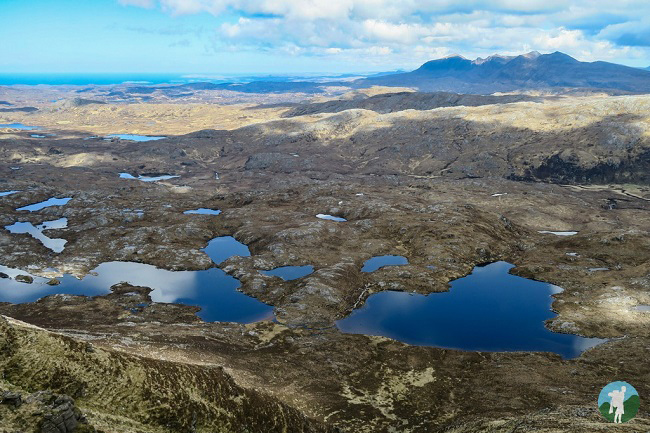 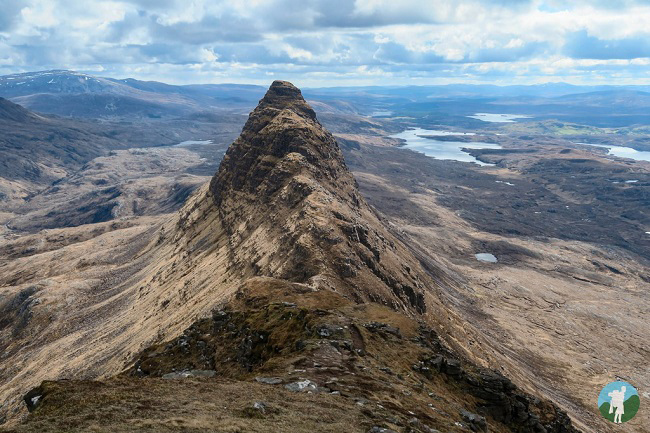 South of the bulk of Sutherland’s walking highlights, this walk overlooking Loch Maree is a stunner. Widely regarded as maybe the most beautiful of all of Scotland’s lochs, its shape, mountain-backing peaks and ancient pinewoods give it a majestic appeal. Scots pines are stunning trees and the clearly waymarked route takes you through the highly forested area before ascending onto rougher quartzite as you approach the summits. This was Britain’s first National Nature Reserve and, despite periodic steep stretches is do-able for most abilities. The true peaks of Beinn Eighe (Ben Eh-uh) and Meall a’Ghiubhais (Me-al a ewe-ish) are not included in the route but the views from the plateau over the Loch and the mighty Slioch on the other side are nuts. My visit was also regularly interrupted by accompanying rainbows, as if it needed any further visual support. 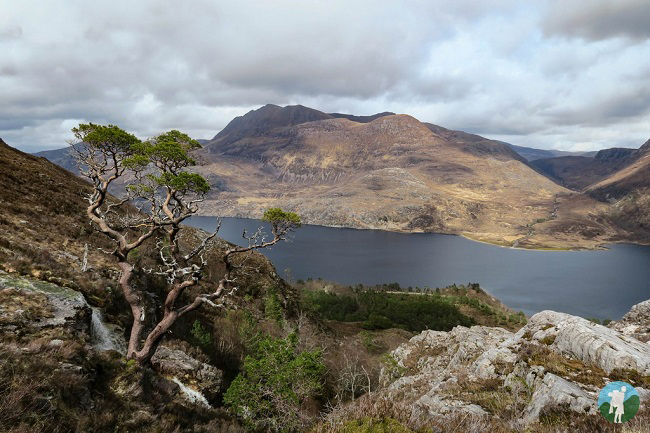 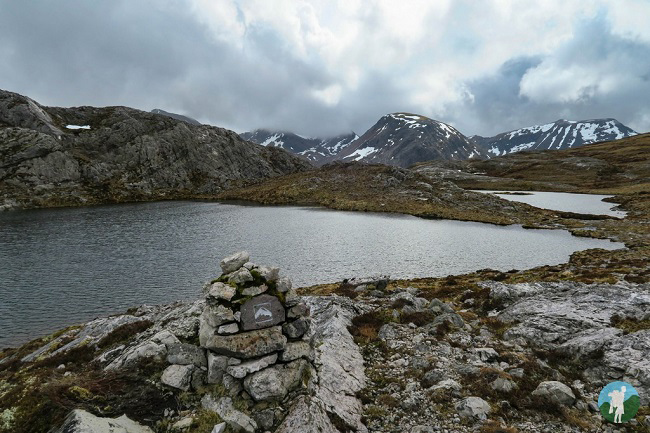 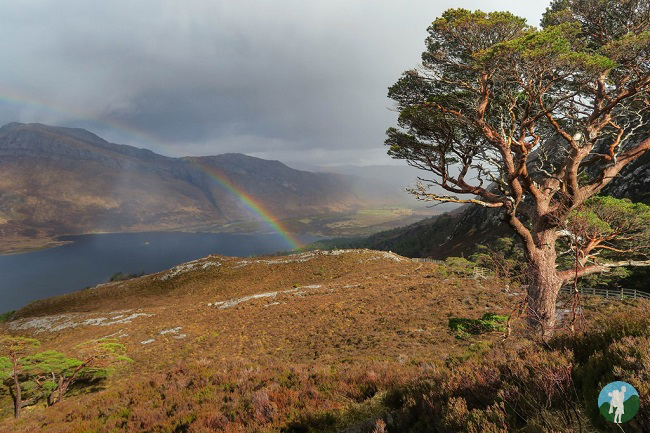 At the easy end of the scale for exertion in the list of Lochinver walks, the journey out to the caves represent a great way to spend a couple of hours outdoors without much effort. Starting just off the A837 between Elphin and Inchnadamph, the route is a tranquil stroll up until the final ascent to the caves themselves. Even then this is only mildly challenging as the fairly steep valley below calls for careful walking. Surrounded by silent limestone it holds an evocative appeal all of its own.

Cave excavations have unearthed remains of humans and animals, some dating back to around 2600BC. The likes of reindeer, Arctic Fox, wolf and even Polar Bear have been found within. Whether they were washed in there by glacier meltwater or taken there by man or beast remains a mystery. What remains now are spooky and eerily remote pits that will forever hold plenty of secrets. 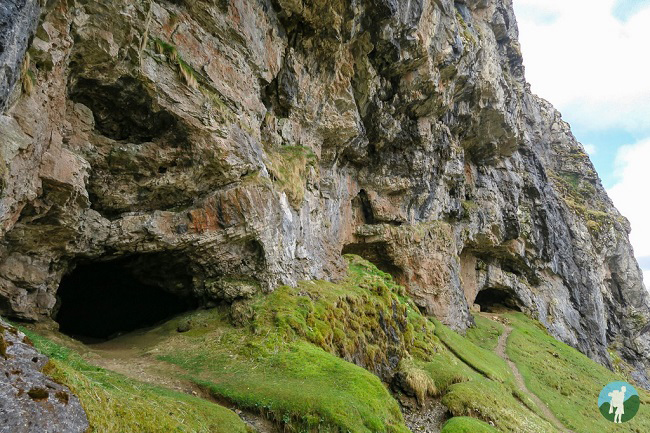 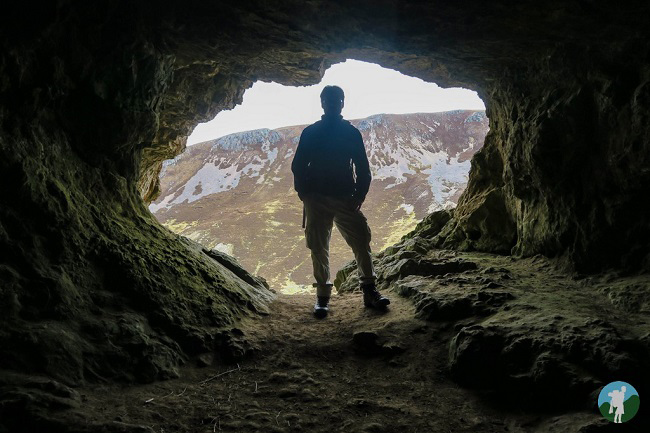 The number of opportunities for Lochinver walks are simply massive and, even going at my typically breakneck pace of travel, repeat visits are simply essential. Slioch, Ben Alligin, Canisp, Quinag and more will one day be added to this list. But these guys give a diverse range of options to get anyone started.

Scotland is not the only place with beautiful mountains, far from it. I’ve been fortunate to have taken my hiking boots all over the world and seen beauty of a type that words and photos will never do justice to. South Africa, New Zealand, China, Brazil, Sri Lanka….all have regions of exceptional beauty, sometimes in even more obvious ways than Scotland’s. But, it’s in their uneasy atmosphere and deeper presence that our peaks stand apart. Whatever impact hills and mountains have had on you in your life, I challenge you not to feel something uniquely moving about our very special Highland giants. I’ll forever be grateful to them.

The Scotlanders Head to East Lothian!

Road Tripping the Western Stretch of the NC500 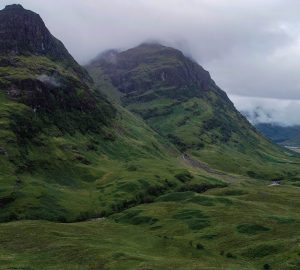