Travels with a Kilt
Great Scottish DrivesScotland on the Coast 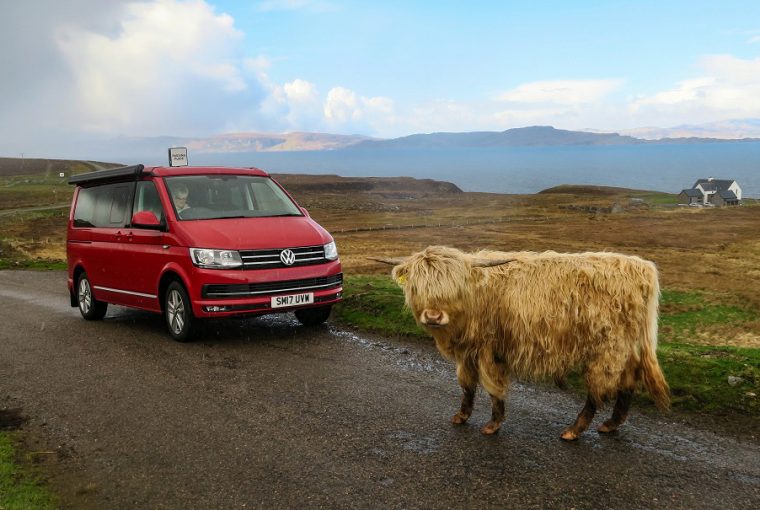 Immediately on heading northwards from Plockton, the magnitude and scale of the far northwest bears its soul. Lurking clouds obscure the rugged peaks’ highest points, sullen waterways bring no warmth and limited, barely-there settlements offer no hearty welcome. No, there is an inescapable dread about dusk in these parts. A fear even, as the glowering mountains snooze with one angry eye ever-so-slightly ajar. Almost hoping to catch your gaze and glare you back from whence you came in Mordor-like fashion. Welcome to Sutherland.

Compared to the downright jolly peaks of Perthshire and Loch Lomond or the heart-warming coastal gentleness of our islands, the western stretch of our now famous North Coast 500 is fearsomely raw.  The route has shot to renewed popularity in recent years as it presents an easily quantifiable trail around an area of the world that has forever had an unchartered feel about it. Vast stretches of remote wilderness await and the lack of infrastructure, decent roads and along-the-way facilities had put many off. That’s changing. Clever marketing and stunning visuals are bringing tourists here in droves and peak season sees the roads chocka with cars, campervans, motorbikes, cyclists and long-distance walkers desperate to see what all the fuss is about. Opting to charge about in my campervan rental for the week on this occasion, here’s a little taster of what to expect.

While the eastern stretches of the NC500 are home to fertile farmlands, cattle grazing expanses and a higher population density, the west is where my heart leads and this particular campervan trip sees me take on the stretch between the Applecross Peninsula and Lochinver. Given that it has been several years since I have properly done Sutherland justice, this particular road trip is long overdue. 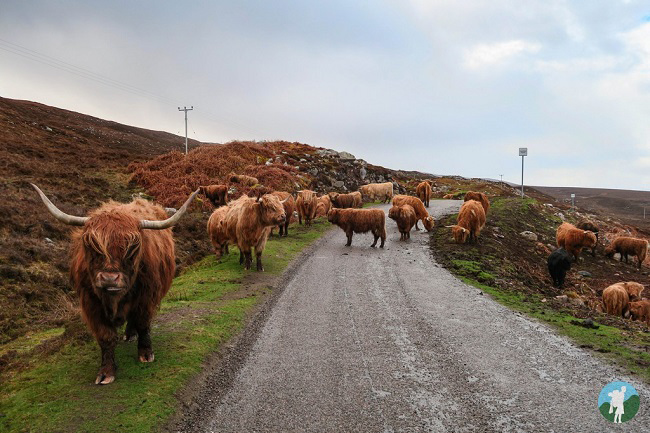 The Bealach na Ba is the ‘deep end’ introduction that just has to be experienced. A terrifying prospect to all but very confident drivers, its winding trail is the third highest in Britain and its very existence seems impossible. Into the clouds you go as the route originally intended just for cattle takes you to the coast and the dainty village of Applecross. I try to picture taking this on on foot, in a blizzard and with low visibility. It would be like some sort of Everest-esque nightmare. What sort of grim prognosis this says about my state of mind that I would even envisage this I don’t know, but there you go. Sutherland calls for evocation, especially the ‘worst case scenario’ kind. I do love letting the mind go. Immaculate little Applecross is sure to have brought relief, delight and euphoria over the years to many a nerve-shattered traveller, that is for sure. 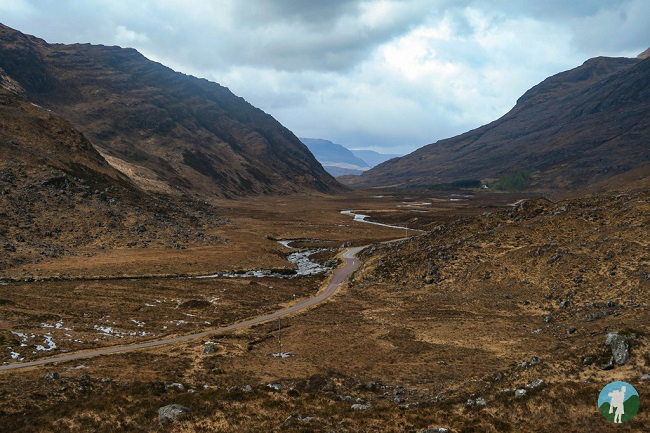 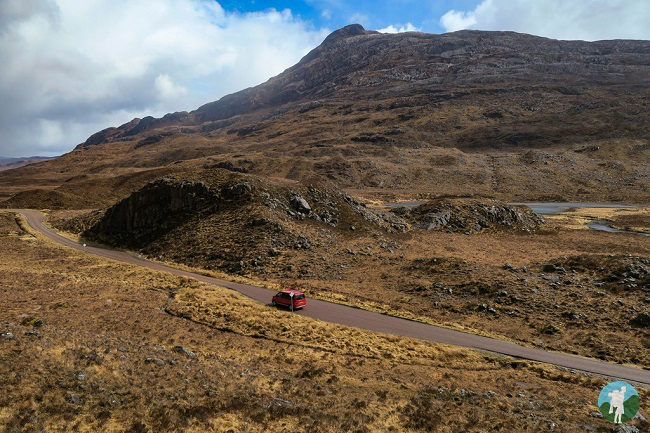 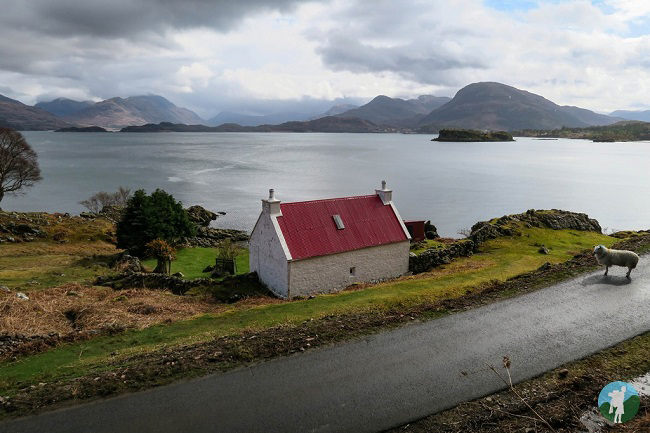 The contrasting coastal route from Applecross to Shieldaig is one of my favourite stretches of road in Scotland. Spectacular near and distance views, promising peaks aplenty, sheltered bays…it’s just the definition of natural beauty. Then coming inland, this part of the NC500 road trip joins up almost seamlessly with the alluring Glen Torridon and arguably Scotland’s most beautiful loch, Maree. Glen Torridon is up there with Glen Coe for aura. Wild and desolate, it’s arguably even more impactful as you get to appreciate it without the stream of interminable coaches trawling the well-done Glen Coe pass. Then comes Loch Maree. Our largest north of Loch Ness (and much prettier), it has a majesty that sets it apart. Its twinkling waters are even traditionally said to have curative effects – a good dunking is thought to cure lunacy. If I ever lose the plot, I know where I’m wanting sent. 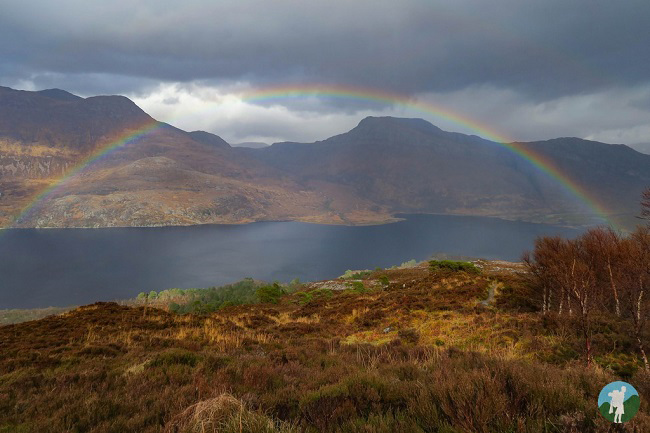 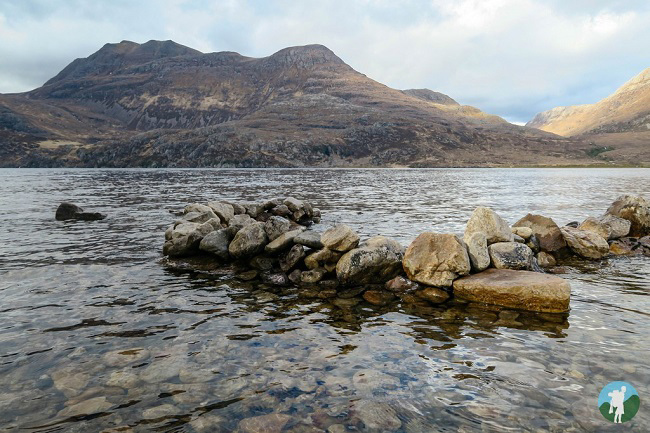 As far as the en-route North Coast 500 campsites go, Gairloch’s Sands Campsite is one of the best about. Logistically, Gairloch is a sensible base and the campsite has coastal views, first class shower facilities and an on-site restaurant.

Having made your peace with the ruggedness and apparent inhospitable nature of these parts by now, prepare to move to much warmer emotions. For many experienced Scotland fanatics, it simply does not get better than Assynt. Here’s a look back at the spectacular walking opportunities like Stac Polliadh and the hard-to-reach Suilven. But even if hillwalking is not for you, this is the home of memories to last a lifetime. Exposed Ardvreck Castle is one of the most evocative you’ll ever see; the spooky Inchnadamph Bone Caves held remains dating back to 2600BC; the numerous waterfalls are powerfully massive and the beaches are divine and logic-defying. Lewisian Gneiss-bedecked landscapes glow orange at sunset and the overpowering geology of the place is only matched by the tingling delight that you have so much of it to yourself. 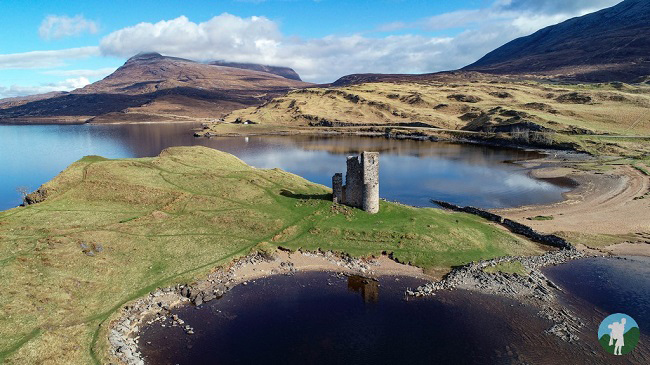 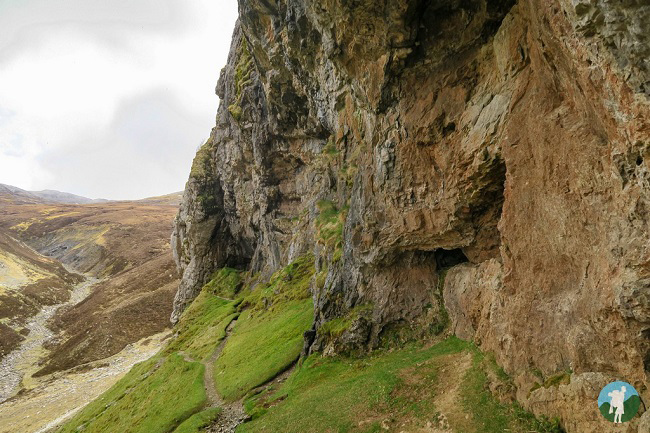 Another of the top North Coast 500 campsites, Clachtoll Beach Campsite also offers a beautiful beach setting and good facilities. Overall, I put it ahead of nearby Achmelvich Beach Campsite as the showering facilities in particular are much better.  Beach lovers will be in heaven up here as Achmelvich, Clachtoll and Clashnessie are three of mainland Scotland’s most beautiful sands and are great places for campervans to pitch up to. If continuing north from this part of the North Coast 500, Sango Sands Oasis at Durness is another fine campsite option. 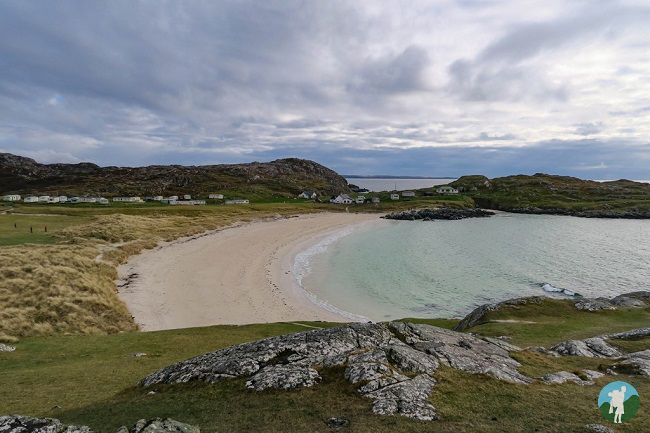 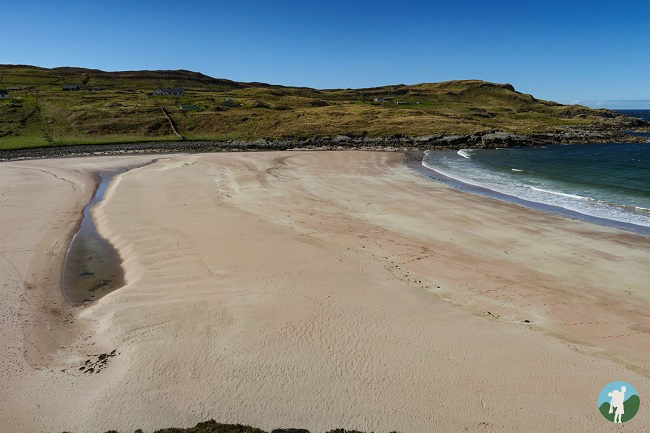 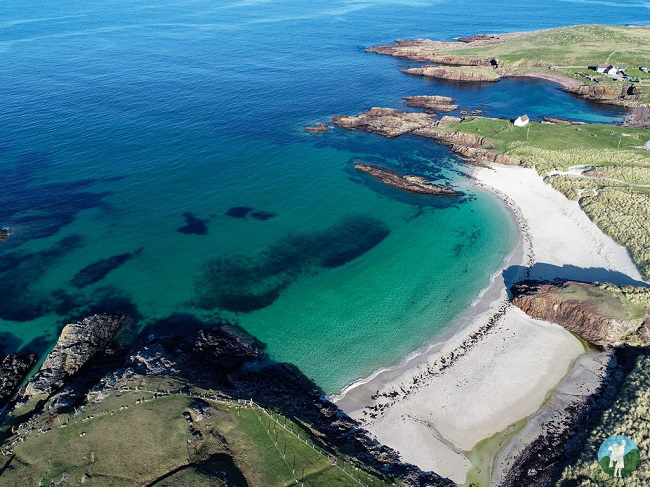 Other things to know along the North Coast 500

Time of year to visit is always a big one. Avoid summer’s peak season if you can. Aside from having more competition to contend with, the midges are at their worst up here and can really wreck your experience. I deliberately opted for a springtime visit as the weather is fairly reliable, things are quiet and the microscopic beasties are still in hiding. If adopting this strategy just beware of campsite opening season times and check ahead. Those mentioned above were open in April, but that’s not always the case.

Ullapool is the only sizable town in the north west stretch so stock up here on supplies. That said, you will find ever-improving standards of restaurant up here and the likes of the Applecross Inn and Peet’s Restaurant in Lochinver impressed me yet again. Do not leave these parts without trying the local seafood at some point.

VW Campervan hire has long been on my to-do list. It’s just always seemed like a natural fit for Highland road trips as the long distances, limited accommodation and often-remote must-dos lend themselves to mobile flexibility. Scrapping to find the last few, often overpriced, accommodation providers along the North Coast 500 in summer, trawling TripAdvisor for hours and trying to plan transport connections in areas where public transport borders on the hilarious is not a huge amount of fun. Cosying up in a vehicle that can easily take you pretty much anywhere starts to seem increasingly appealing and, with numerous quality North Coast 500 campsites along your way, it’s the option requiring the least research and planning.

Having trialled a motorhome earlier this year, it’s important to note the distinct difference first of all between motorhome and campervan. The former is much larger, often including a bathroom and a well-sized kitchen. The latter is much easier to drive but much more restricted in space. The engine on the VW is fantastic and zipped around like nobody’s business compared to the much more cumbersome motorhome. Parking up at roadsides (where permitted) is also much easier and was absolutely perfect for my long-awaited hike of Suilven that has a roadside starting point (see first image below). 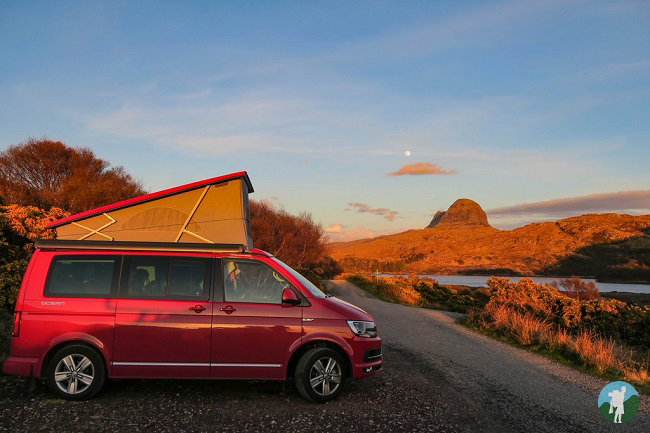 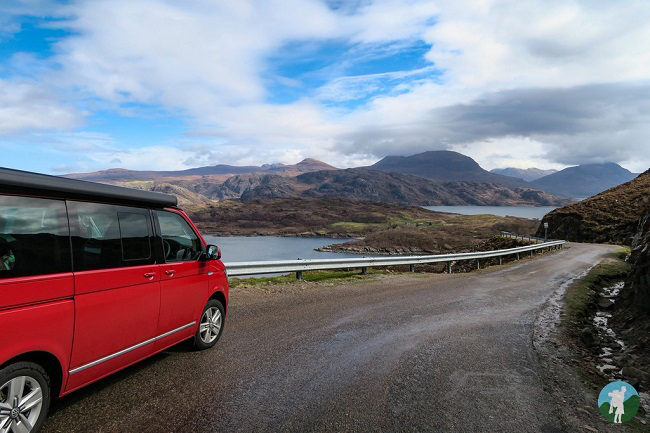 The VW California Ocean is fabulously compact, efficient and a lot is squeezed in. The extremely cool elevating roof made two bedrooms possible (although the claim that it could accommodate up to 4 people may be stretching it a bit in my view). Somehow manging to fit in chairs, very generous storage space and even an awning area for those sunny Scottish spring evenings, I would say this has to be the ideal form of northern Highland travel for couples, or a couple of friends. One potentially negative note for the foodies – the kitchen area and equipment are not adequate enough for proper cooking so do not rely heavily on this feature. Cups of tea, heating up soup etc is as much as you’ll likely manage here comfortably. If you’re thinking of doing a lot of cooking consider a motorhome.

That aside, there’s no doubt it’s a very impressive vehicle and it’s well-loved by the camping community. Whether stopping at one of the North Coast 500 campsites or by the roadside, it brought a rustic feel to this incredibly raw part of the world. Although I am and will remain very much a car driver first and foremost, this particular stretch of the Highlands sees these guys come into their own.

I was invited to try out the VW Campervan for the purposes of this trip by Clark Commercials. As you will hopefully appreciate, this vehicle review was balanced, honest and based purely on my personal experience on this particular road trip.

Scotland’s Spectacular North West and the Walks of Sutherland