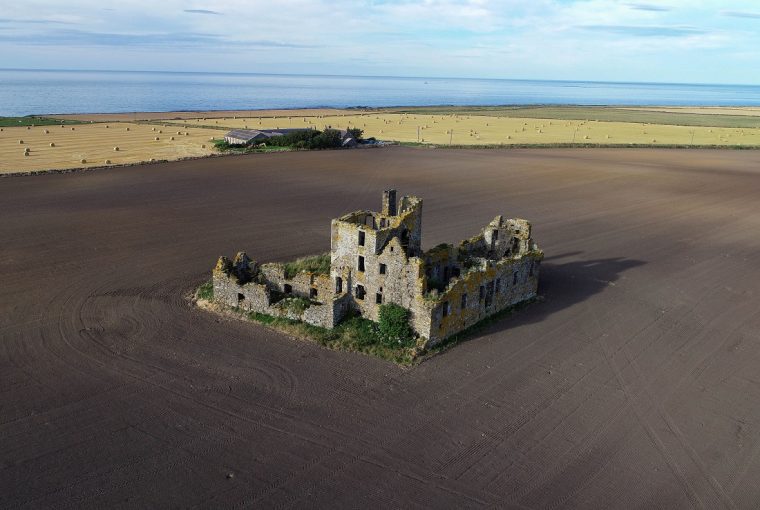 North East Days Out on the Coast

It’s a rare thing, this. A first foray into a part of Scotland that I have very limited personal knowledge of. I’ve been intensely travelling Scotland for seven years now, as well as being born and raised here of course, and there remains precious little of this land that I haven’t formed a relationship with. There’s some of the smaller islands sure (I’ll never visit all 800ish of them and have no intention of trying) but the varied and atmospherically-charged north east coast is my final unexplored nugget on the mainland. Over to you, Fraserburgh.

Have you ever seen the film Local Hero?

I strongly suggest that you get on the case. Because this is a movie that manages to capture an enormous amount of all that is Scottish – from natural wonders to sense of humour – an 80s classic that’s up there with the Bravehearts and the Outlaw Kings for me. And it was in these parts, along Aberdeenshire’s rugged coastline, that much of the filming took place. Specifically, the picture-perfect village of Pennan did a fine job of epitomising quiet, coastal Scottish life…..with an allure that ultimately captured the hearts of unsuspecting Texas oil men. The famous red phone box (a real one, not the prop which was actually used) still sits just off the waterline and don’t be surprised if a wave of misty movie nostalgia creeps up on you. Superb soundtrack too. Watch it, then let’s have a chat. 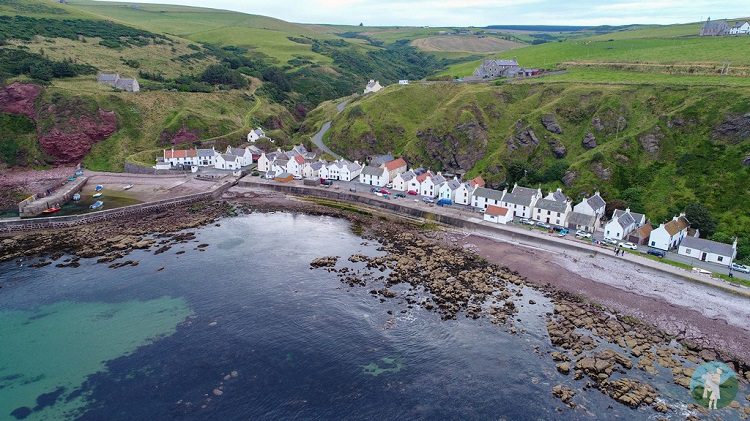 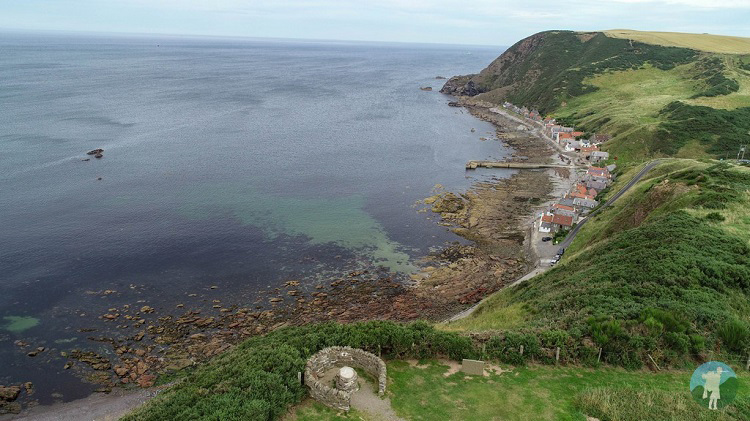 But Pennan is not the only immaculate north east charmer to add a sparkle to this section of the Moray Firth. A little further west down the coast you’ll find diminutive Crovie, a neighbouring harbour settlement that impossibly hugs the narrow base of the steep cliffs above. So narrow that cars cease to be of any use at the southern end of the village, it is a dreamy representation of a classic fishing village. A place where time is measured differently. Steal a sunset or, dare I say it, a display of the Northern Lights, here and you’ll likely capture a memory that will be with you forever. 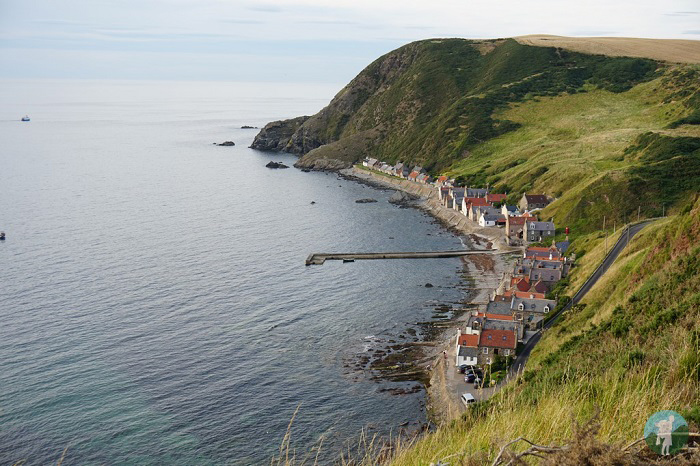 You’re kidding yourself if you think you can visit the north east coastline and not drop in here. Having an actual laugh. Because it is our lighthouses that know our waters and our shores above all others. Like Watchers on the Wall they oversee the calm, the dramatic and the downright lethal potential that our seas have in their lockers.

That Kinnaird Head Lighthouse is actually built on and around a 16th Century castle only adds to the curious layout of this site. The conversion into Scotland’s first mainland lighthouse in the late 1700s underlines the diversity of journey that our ancient castles have had before them. The Stevenson-engineered lighthouse would go on to steadfastly protect this corner of Scotland’s coastline, throwing out a beacon of light capable of reaching 25 nautical miles. The comprehensive tour of the castle/lighthouse explores the day-to-day lives of the keepers as well as the engineering precision required to keep that beacon forever awake. 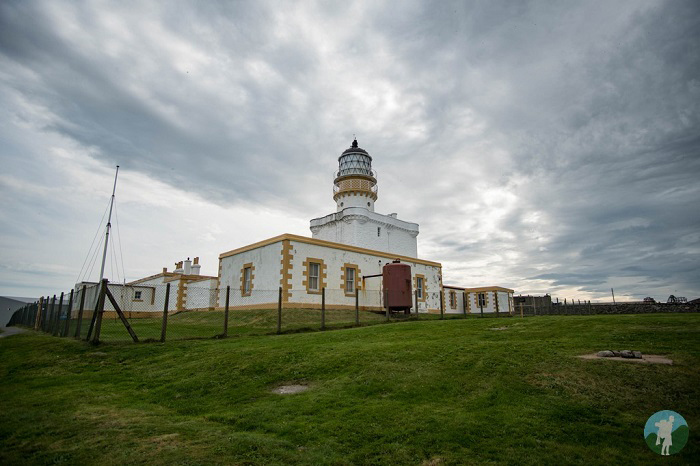 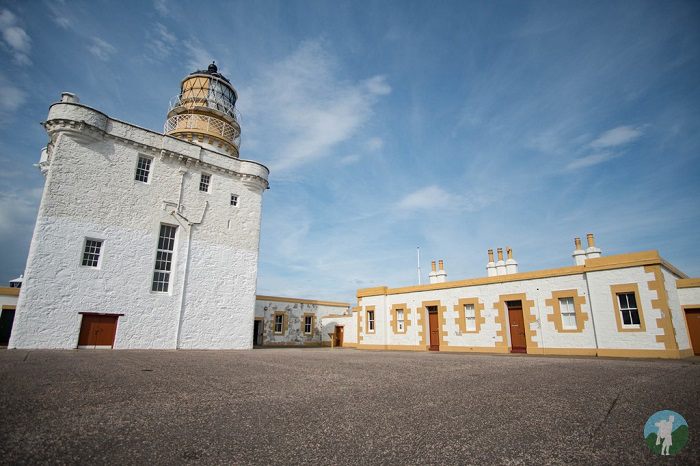 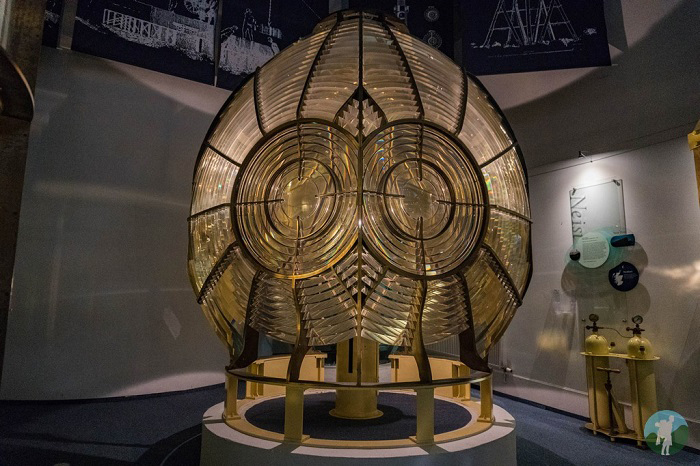 Speaking of the lethal seas, there’s one particularly impactful story within the Museum exhibition area – that of a very real Local Hero, Jane Whyte. An innocent wander on nearby New Aberdour beach in 1884 saw Jane faced with the need to single-handedly save no less than 15 sailors whose ship was irreparably stranded off-shore. Wading into stormy waters she tied the crews’ makeshift lifeline around her waist and gave each man a means of reaching land safely. An extraordinary story and one that, I am told, perfectly captures the complex and all-consuming connection that the people of the Fraserburgh area have historically had with the sea.

For more on the story of the town and its economic, historic and social development, pop over to the Fraserburgh Heritage Centre next door.

I simply had to get on that water. Harrowing tales aside, we all hold the seas in high, albeit often distant, regard. We know how irrelevant we are in comparison, we know the dangers, we know the importance. And we know about seafood. Fortunately, Fraserburgh has just the thing.

Departing from Fraserburgh Harbour, a Misty Angling Sea Trip is both a fishing extravaganza and a coastline and wildlife tour. Cod, pollack, ling, hordes of mackerel and the odd curious gannet or seal will be making your acquaintance between chats with the fabulous crew and other fishing enthusiasts. One of the few options in these parts when it comes to getting on the water, I’ve never been so close to a seal in all my many boat trips around the isles and almost hand-feeding one was surreal! 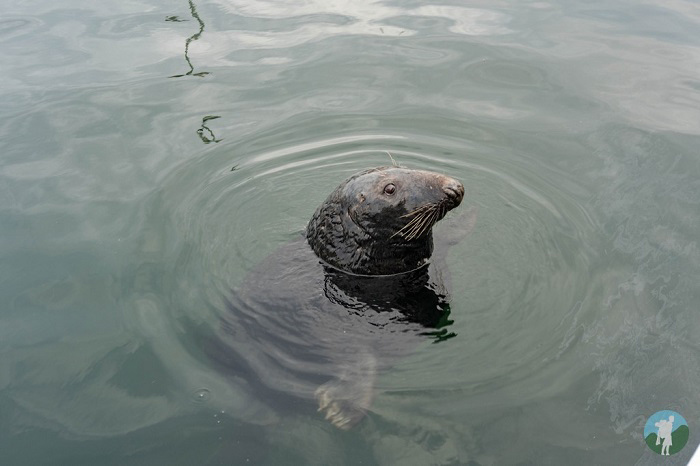 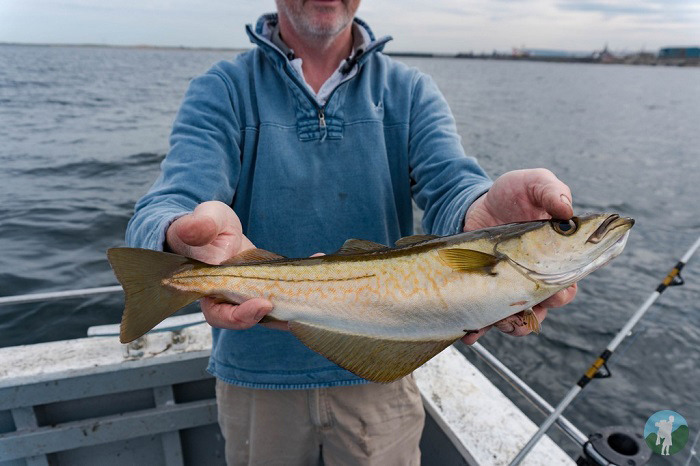 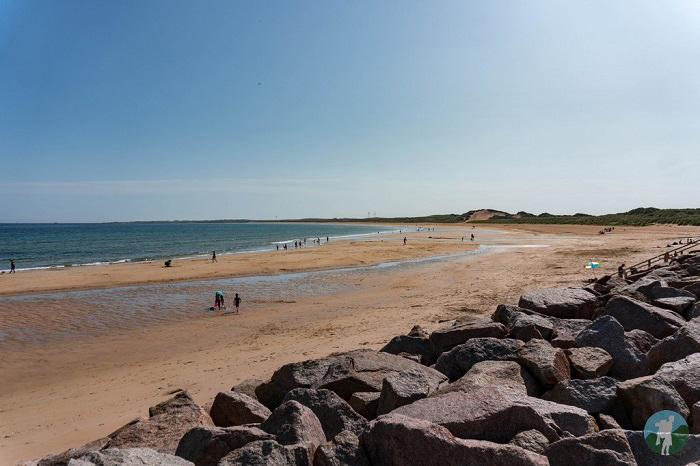 Of course, for those not keen on testing their sea legs, there’s also a beach. A very nice one.

The Fraserburgh area holds two superb castles. Forgotten, to the extent that they’ve not even been on my radar, Pitsligo and Pittulie would be very different tourism propositions were they in the Central Belt. We really need to find an alternative to the descriptor ‘hidden gem’. I kind of cringe every time I hear it – a lazy and overused term, omnipresent in the industry that no longer delivers sufficient credit. While we wait, you get my meaning, and these guys fall into that category. Feeling more in line with some of the derelict former homes that I dug around in last year, the unofficial and abandoned element adds a different level of intrigue. 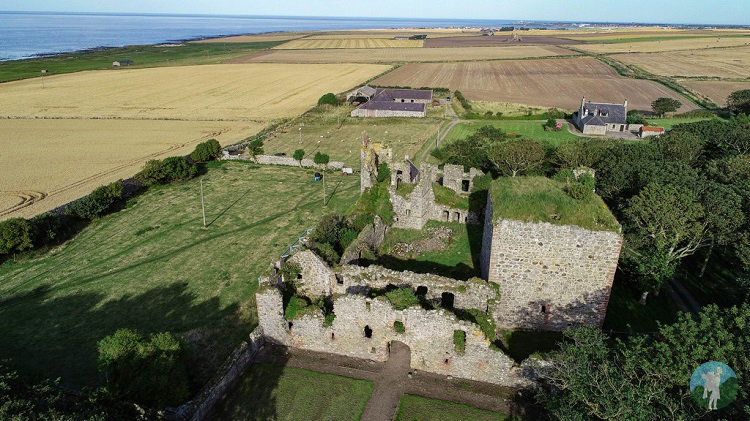 Pitsligo started out as a 15th Century keep before taking on most of its existing shape in the 17th Century. A home rather than a fortress, it passed between families and generations but was principally in the ownership of the Forbes family. Their support of the Jacobite cause brought Pitsligo to a premature end after Culloden. Great fun to poke around, the dungeon-like interiors have become wonderfully overgrown, dragging their secrets into the long grass. The main walls, presumably at risk of collapsing completely, have supporting apparatus in place – the only clear sign that anyone is still aware of its existence. 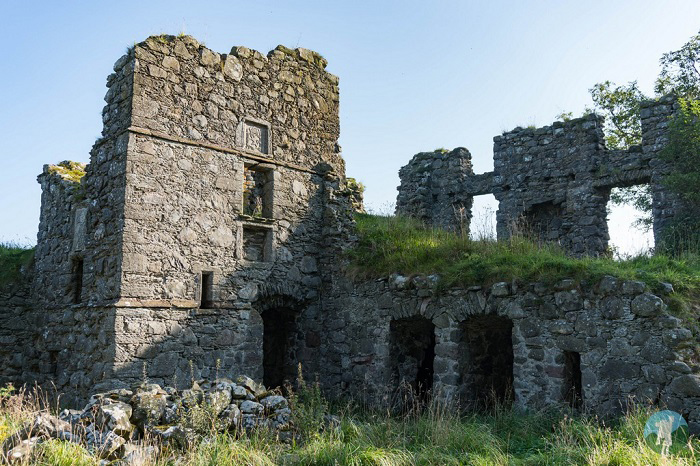 Pittulie meanwhile can be seen around half a mile to the east of Pitsligo. With Google Maps failing completely, I quickly realised that this particularly odd relic sits adrift, lonely and islanded in an earthy sea. A form of bizarre desert mirage, it doesn’t look real. Unsure if I should even be approaching, it made for a curious walk across the wide, flat, bare field as I took in one of the most impactful castles I’ve ever encountered. Thought to have been built for Alexander Fraser and Margaret Abernethy of Saltoun in 1596, it too was for domestic rather than military purposes. 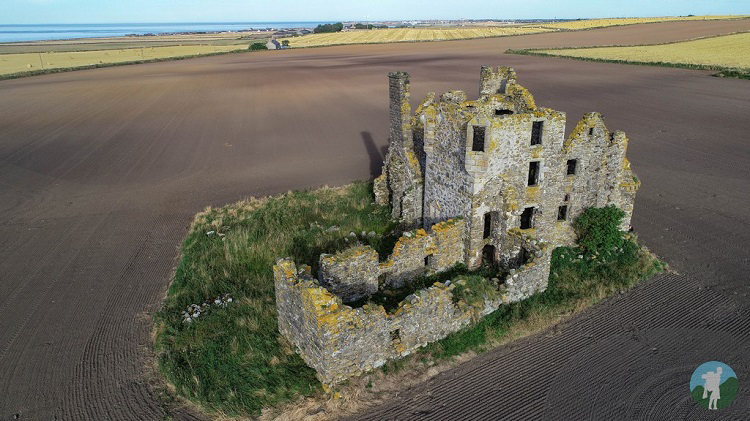 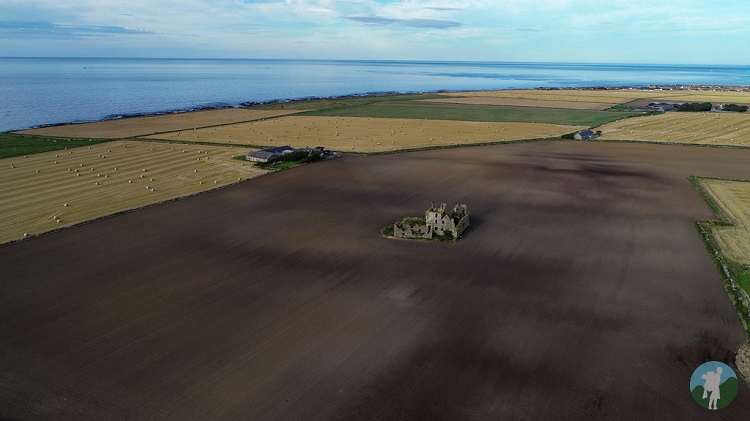 Bit of a daft heading. This trip is already an escape. An escape from city life and perpetual urban impatience, and a deliverer of a slower pace. The shoulders drop, the mind relaxes and the blood pressure descends to a less dangerous level. But, if an escape within an escape is still needed, the Fraserburgh area can deliver that, too. 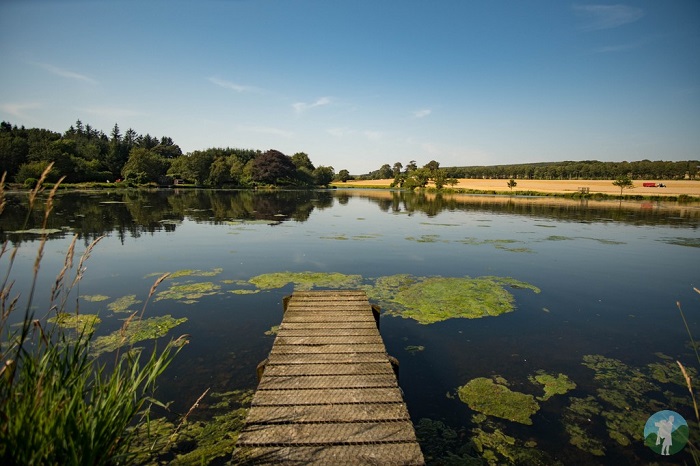 Bird life is plentiful in these parts and the RSPB’s Loch of Strathbeg is the place to go with the binoculars. Terns, geese and swans await. Then head south and inland, destination Pitfour Lake. An impeccably sedate and nature-abundant area, you’ll be able to incorporate woodland walking, nature spotting and plenty of you time. You’re surrounded by the ever-present acres of stretching Buchan farmland in all directions, and there’s no rush. It’ll take around an hour for a relaxed wander around the water’s edge and there’s an unofficial parking area to the east of the Lake, just north of the A950. A picnic wouldn’t be the worst idea.

Within a few minutes, you’ll also find reflective Deer Abbey and the delightfully disconcerting Aikey Brae Stone Circle. The former is the remains of a 13th Century Cistercian monastery, a place holding hundreds of years of religious contemplations. The latter, a typically mysterious insight into unknown times, circa 4000 years ago. A wander up a field-side track followed by a short and ever-so-slightly uneasy walk through dense forest and you’ll find yourself in the centre of this ancient marvel. Best guess has it that it was some sort of season-recording, lunar-observing station but standing stones are far too complex for us lot to fully fathom. Let the mystery be. 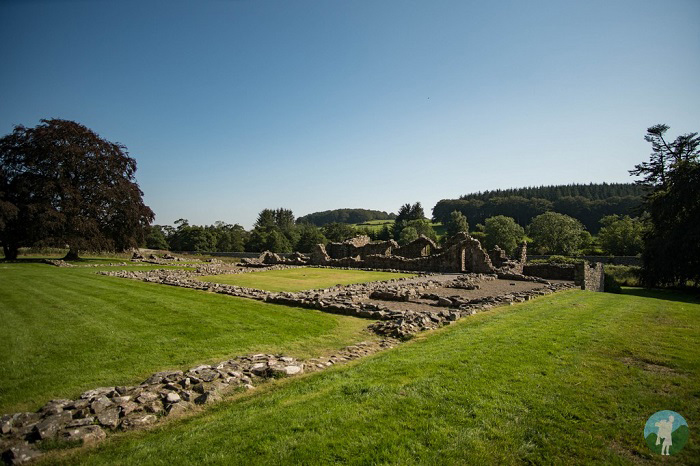 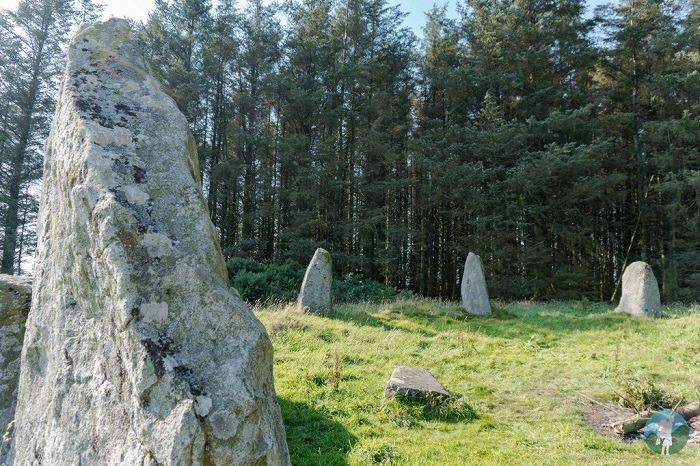 This little corner of north eastern solitude can be completed with a first-class dinner at the Saplinbrae Hotel. Reliably recommended as among the best dining options in the region, the focus is on local produce done right. It succeeds. 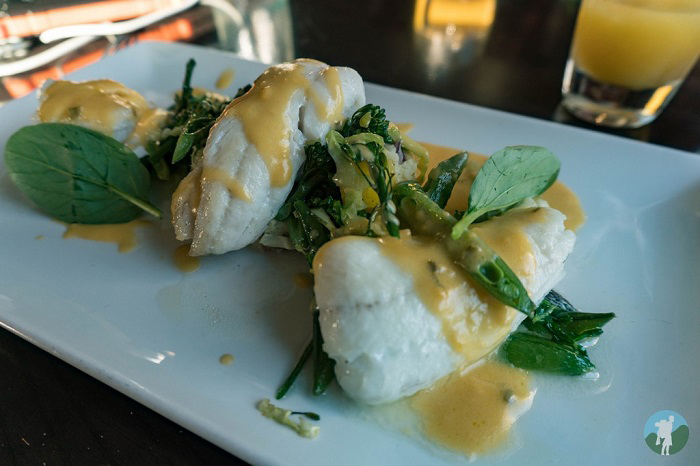 Although limited in number, the tourism providers in the Fraserburgh area struck me as among the friendliest and most accommodating I’ve encountered. Tourists are a relative rarity up here and a very personal level of service can be expected – allowing for unusual opportunities for folk like me to just casually chat with locals, even in peak season.

An excellent seafood lunch is to be expected at The Captain’s Table in the town, focussing on locally caught produce and outstanding service. It’s hard to imagine a food business ever, I mean ever, saying the words ‘focussing on local fresh produce turned out to be a bad idea’, and yet it seems such a frustratingly hard thing to find – to a high standard anyway – in Scotland. These guys manage it well.

The Davron Hotel’s neighbouring restaurant offers some reliable favourites – again with a local focus – and made for a very practical and comfortable accommodation base for exploring the whole region. Glamping enthusiasts, meanwhile, will find nowhere better than the excellent Down on the Farm near Rosehearty on the coast. Serene, practical and comfortable they also boast the best toilet in the world. Yes, that is a whisky barrel. 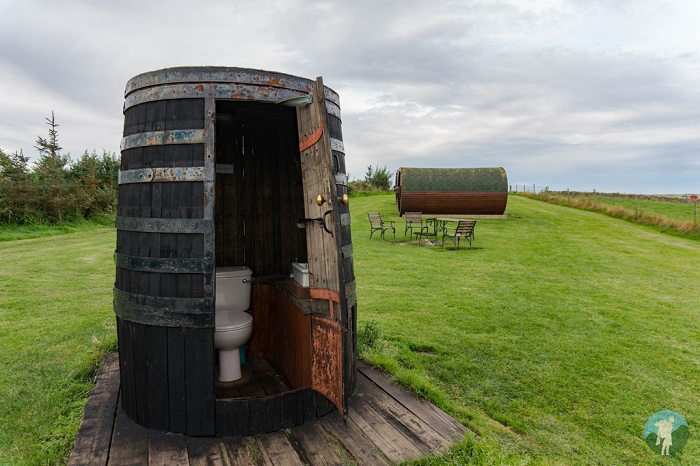 This was another of my promotional visits to a region of Scotland I’ve been aching to explore, and I was invited on a sponsored basis by Discover Fraserburgh. As per though, everything in this blog is based on recent and honest experience and my recommendations are genuine.

A Weekend of Culture, off the beaten path

Travelling Scotland, with a Difference