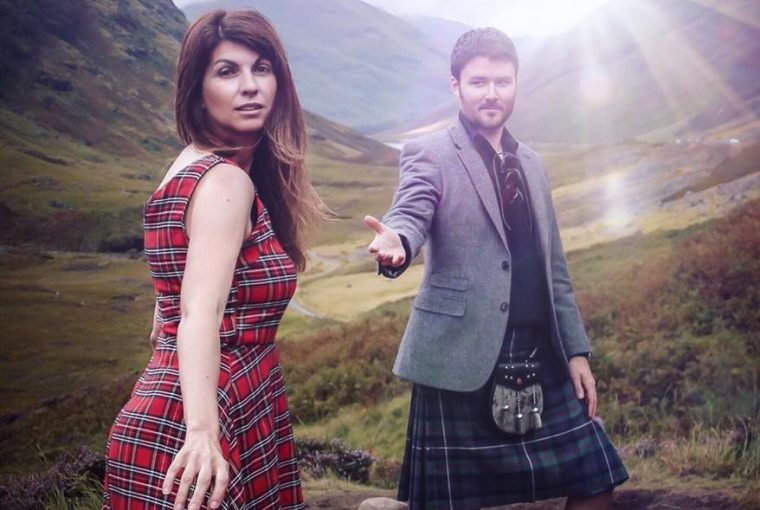 I remember my thought-process during the early minutes of Series 1, Episode 1 of Outlander. A bit over the top, un-relatable, unrealistic….all occurred to me as I pondered whether I’d suddenly start regretting my Amazon Prime subscription. There may have been some mumbles about it being a necessary part of any job in Scottish tourism and just having to make peace with it. Fortunately, the dubiety didn’t last long. A wee bit of time travel to the politically unstable, militarily combustible and generally brutal times of the Jacobite Risings in Scotland hit me where I’m weak, and Outlander had another convert. Opening up the door to an all-consuming chapter of Scottish history, the TV show is now about to enter its third season. What has come before has seen the show make use of dozens of brilliant filming locations all over Scotland and, along with my fellow Scotlanders bloggers and VisitScotland, we undertook another one of our epic challenges – to visit every Outlander filming location in just one weekend.

6 of Scotland’s top bloggers divided into 3 pairs to storm around the land at ten to the dozen to visit over 30 sites. While we’re used to this sort of madness having been doing similar campaigns for years, we knew that this was likely to be the biggest ever in terms of worldwide interest. So it proved with over 3 million people following along with us over the two days on the road. The pressure to deliver interest and entertainment was on and for my part I teamed up with photographer Kristy Ashton to take on ‘The North’.

Here’s where we ended up….

Stop one for us was a special one. Well away from well-trodden routes in rural Perthshire, this immaculate little place is as authentic as they come. Far from a tourism destination, it appears to be like many other village parishes. Picturesque, serene and just ever-so-slightly spooky. 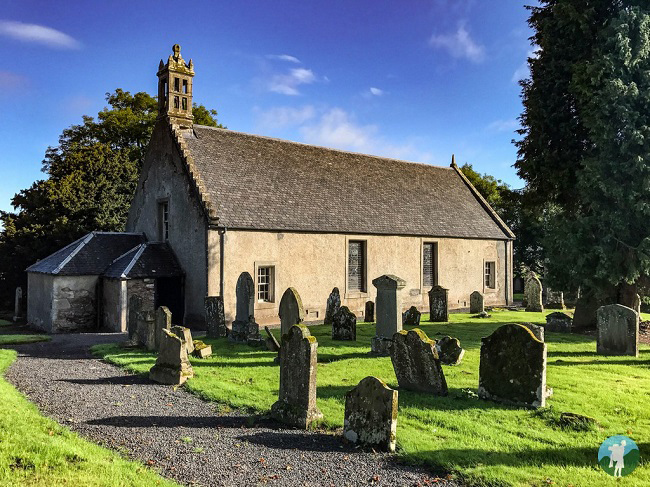 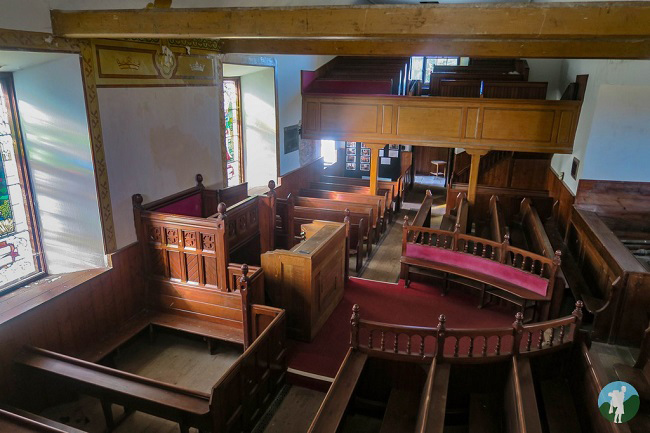 The church interior was used in the filming of the trial in Season 1, where Geillis and Claire stand accused of being witches. A fascinating insight into the primitive legal systems of the time, not to mention the simple, god-fearing nature of the locals, resulted in a grizzly end for Geillis and a fortuitous escape for Claire. Jamie may have burst in with his bulging biceps to sort things out. A better spot is hard to imagine as the snug and compact interior meets the tangible atmosphere. What a pick!

One of the most majestically impactful gardens in the country, Drummond was an unsurprising choice to double as Versailles in Season 2. Astonishingly beautiful and vast in scale, this was the Outlander spot for the reunion of the show’s three leading characters after their appalling encounter at the end of Season 1. Tensions were high but, in the presence of French royalty, restraint was displayed as chilling glares were the extent of the aggression on show.

Rumour has it that we’ve not seen the last of Drummond Castle on our screens just yet either…. 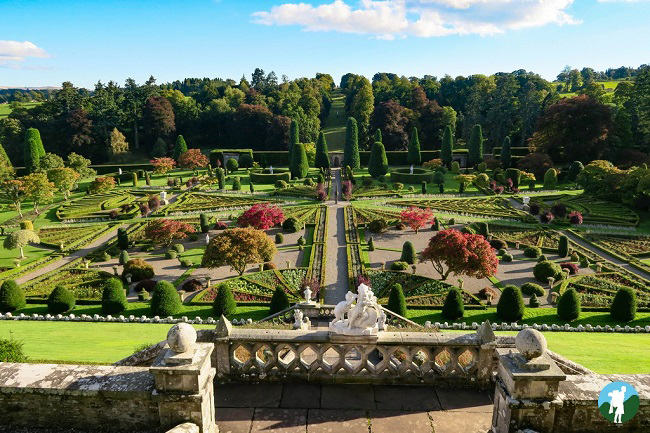 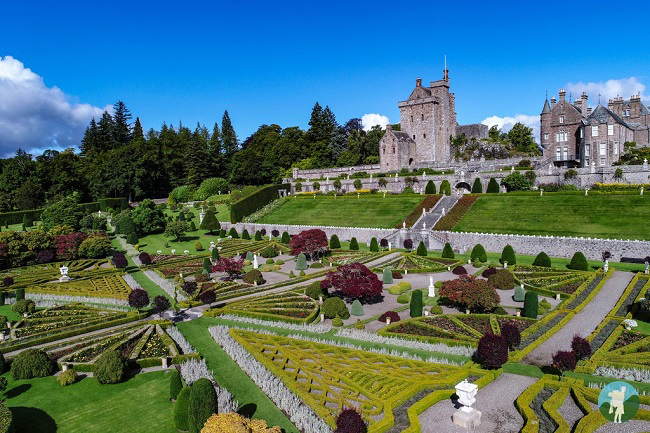 The journey north through Perthshire enters the Highlands as we come to one of the most naturally magnificent stretches in the country. There was extensive filming here for Highland backdrops and, of course, as the site of the mythical Craig na dun. Under the watchful glare of conical Schiehallion (one of Scotland’s most famous Munro peaks) and with a glorious smattering of lochs and glens, this is serious road trip country. With the majority of the tourist masses charging past the likes of Killiecrankie and Pitlochry, few take the time to adequately explore these parts. I suggest you don’t fall into that particular trap. 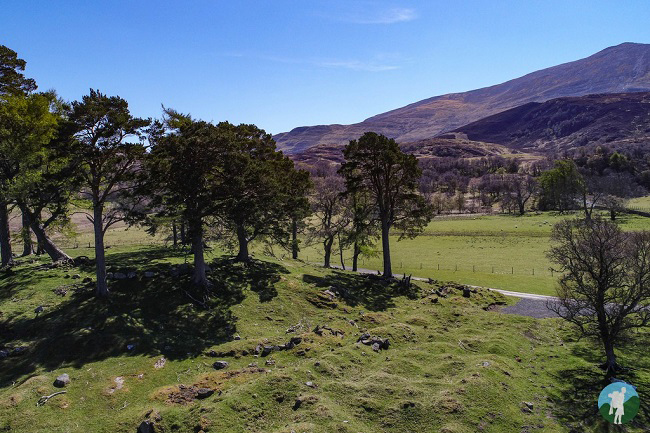 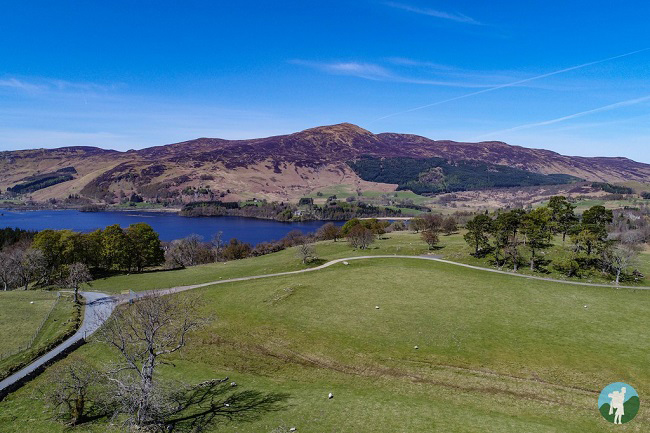 The open-air Highland Folk Museum in the Cairngorms is perhaps the filming location that will resonate most with ardent followers of the show when you visit. Unlike the others it hasn’t been touched up for the cameras and does actually serve as a Highland village of old – costumed guides and all. There’s authentic thatched roof cottages, recreated public buildings and even an overpoweringly strong example of peat-fire cooking/heating. A deep breath of which will clear your lungs right out.

The open-air museum was used in Season 1 when Claire was still a guest/prisoner of Dougal and his pals as they went collecting dues from tenants. You may remember the incident with the urine and all the local women singing merrily as they set about manually dyeing fabrics…..the old fashioned way. Our visit fortuitously coincided with an Outlander fan gathering and the staff got on the Jacobite and redcoat gear to recreate some of the filming scenes. Damn that’s an awfy big gun. 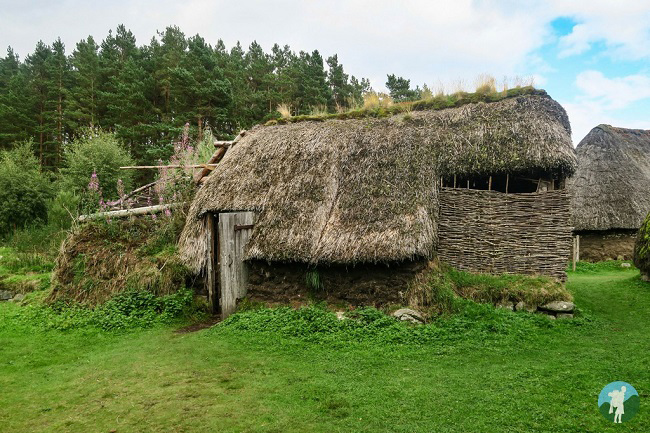 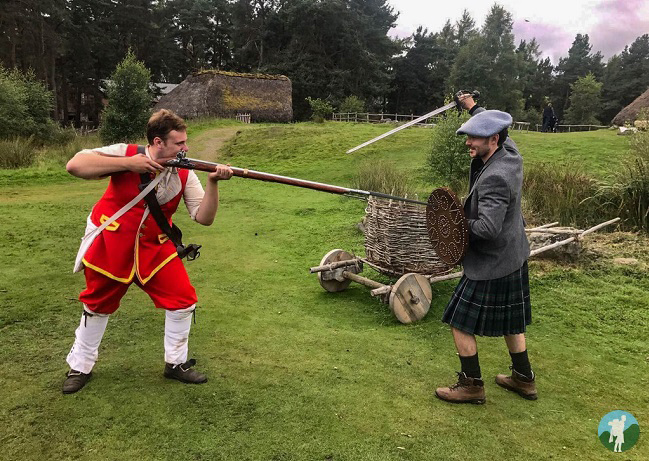 Well, what more can I possibly say about Glen Coe. I’ve been chucking adjectives for this place around like a man possessed for years and years and you must all be getting fed up of it. I apologise of course, but there simply is nowhere else like it. Its scale, mood, layout and mystery make it the most romantic and, paradoxically, fearsome place in the Highlands. When the show’s creators were thinking of a starting point, an opening scene, it’s not really much of a surprise that they ended up here. When Claire introduces her journey to the audience in the opening seconds of Episode 1, the spectacular backdrop is here, the Three Sisters of Glen Coe. We set about recreating it by finding the exact vantage point used. 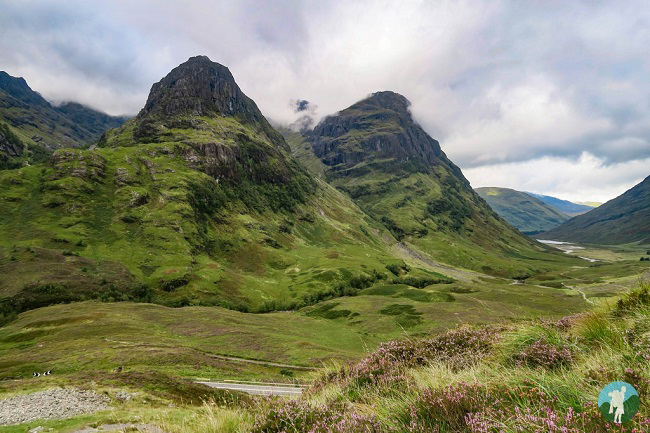 As if close to 500 miles on the road was not sufficiently adequate for ‘Team North’, we took it upon ourselves to hike up one of Scotland’s best loved hills as we prepared to leave the Highlands behind. Ben A’an is an absolute gem. A pretty easy climb by all accounts, it delivers a breathtaking reward on reaching its summit. Sprawling views over Loch Katrine and the Trossachs leave you feeling as though there’s a catch somewhere (the ascent can be done in under an hour). The natural beauty of the area made it another pick for those rural backdrops and the eastern shoreline featured in Season 2. 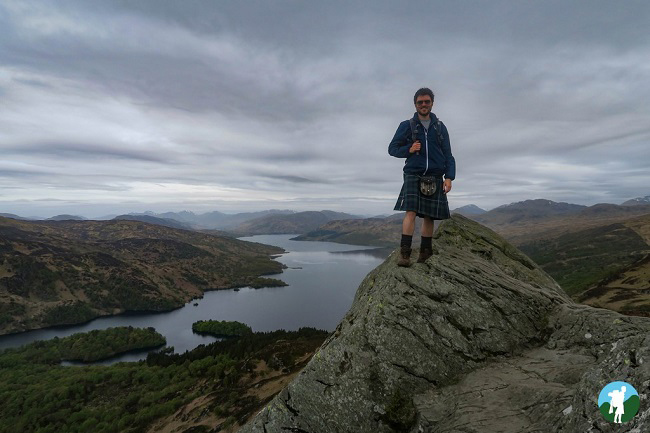 I can’t say it’s a huge amount of fun in a kilt but, if you’re a first timer looking for a starting point with Scotland’s peaks, you’ll not find better.

In whisky circles, Deanston is almost certainly not one of the brands that will immediately jump off your tongue. Regardless, I’ve long considered it amongst my favourites of the Highland malts. Their Virgin Oak is a beautiful dram and I’m a serious fan of the 12 year old – all sorts of fruitiness and spices going on in the tasting notes there. But this is neither the time nor place for my whisky babblings, I’ll stay on topic I promise. Because it was deep within the distillery, in the utterly superb cask warehouse where the maturation magic happens, that filming here took place. Vast and dingy in perfect proportions it is basically a dungeon worthy of a dragon pit and was used in the early episodes of Season 2 when Jamie and Claire are newly arrived in France and find themselves in a wine warehouse amidst a plague outbreak. 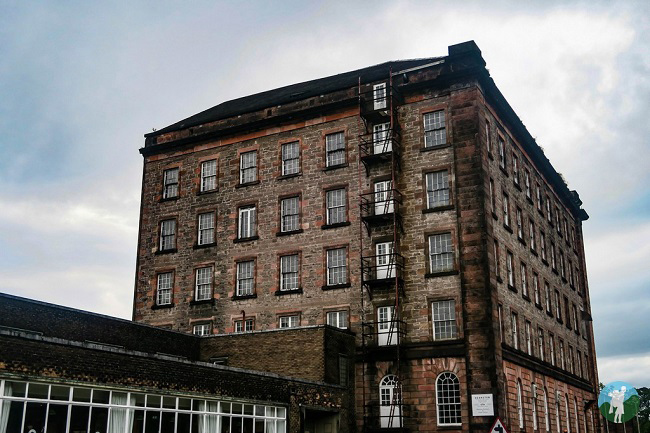 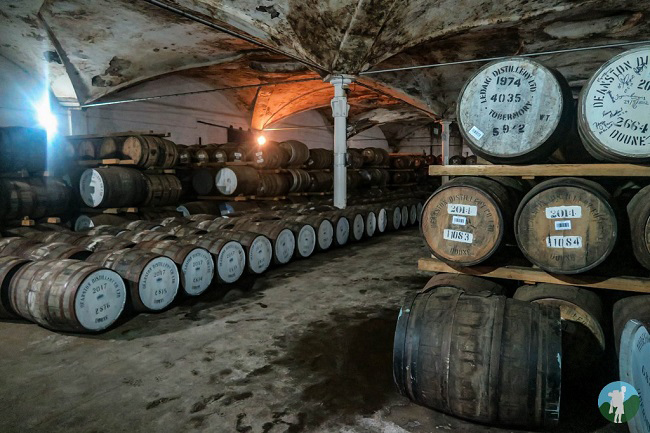 As a location, Deanston has one of the best there is. Set within a former cotton mill, the building carries that magnificently grand industrial feel superbly. Throw in the fast flowing waters of the River Teith immediately outside and you’ve got yourself a distillery champion.

All three teams simultaneously converged on our joint-final filming location, the wonderful Doune Castle. A firm favourite for the cameras it was the choice for mighty Castle Leoch. A dominant site throughout Season 1, Leoch was base for the Clan Mackenzie and the epicentre of the bluster and buzz of 18th Century clan life.

The Outlander effect has seen Doune Castle shoot to fame and it generally struggles to hold the masses that descend on it in peak season. I can see the appeal though. I’ve always referred to it as a ‘proper’ Scottish castle – militarily sound, capable of being a prison and royal residence in equal measure and set in a practical (think proximity to Stirling’s main roads) and picturesque setting. It simply ticks all the boxes. 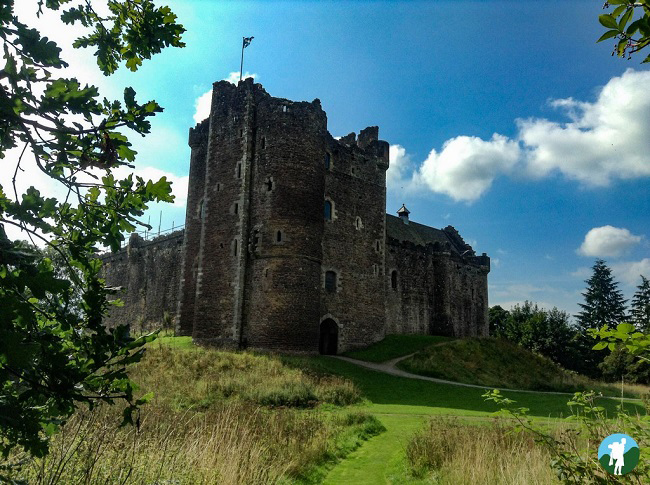 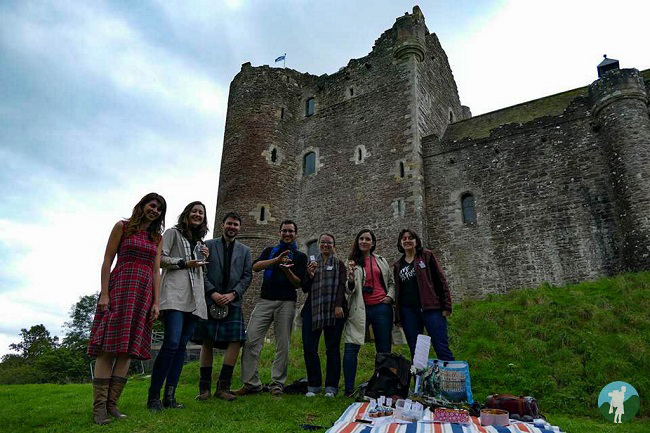 On arrival, all three teams had been on the road for 36 hours, travelling at a breathless pace and all the while throwing all sorts of locations, vistas and experiences onto social media. Trending multiple times on Twitter and, as far as I’m aware, breaking all Scottish tourism digital marketing records for campaigns of this type in terms of reach, we pretty much crawled weeping to the finish line. But, what an adventure it was.

In addition to our northern jaunt, the other two groups took on central and southern Scotland. David and Sophie were in Fife and the Lothians while Laura and Patricia had Glasgow and the west. Blog posts from each are in the respective links so you can piece together everyone’s journey and add up every filming location for your own Outlander itinerary of Scotland. VisitScotland have also helpfully produced a map of the locations for further assistance in your planning. Question is, do you have a favourite?

The Best CliffTop Castles in Scotland

History Hunting in the Scottish Borders