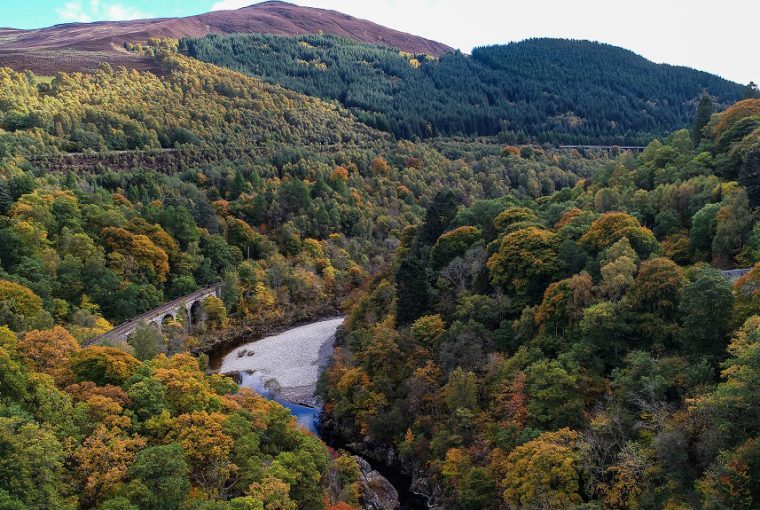 Scotland in October and a Perthshire Autumn Road-Trip

Seasonal change is never more apparent than during a Perthshire October. Dense forests and stretching glens are home to some of the largest, oldest and wisest trees in the world and their riotous colour changes are a joy to behold. The stags are rutting, red squirrels are darting and local whisky is flowing. Peak colours time tends to be late October in Scotland so consider this a timely little teaser for those looking for some autumnal inspiration….

Perthshire is gigantic. Most of us will immediately feel our minds wander to the likes of the Hermitage, Pitlochry and Killiecrankie. Those familiar stops along the always busy A9. More experienced Scotlanders may think on the picturesque hubs of Aberfeldy, Blairgowrie or Crieff. But, amidst and between all of that, there are miles and miles of empty Highland landscapes, forever lochs and forgotten stories. My Clan, the Robertsons, are from these very lands. Majestic, yet sombre. Wealthy, yet unimposing.

Take the backroads from Crieff to Kenmore or from Kenmore to Kinnloch Rannoch and you’ll have this laid bare in front of you. Get out the car. Feel the barrenness, the remoteness and the mood.

It’s a special kind of Highlands, here. Getting lost, in every sense of the word, is easily done in Perthshire.

Weekend getaway territory, Loch Tay is a favourite for the city slickers that want big outdoors without travelling too far. The well-trodden trails up Ben Lawers are testament to that. The Loch is also extremely popular as a fishing destination with salmon, trout and more on the radar.

The Scottish Crannog Centre is among the most unique of all Scotland’s cultural attractions and a thoughtful tribute to a way of life that could easily be forgotten. Domesticity on stilts, crannogs were common dwellings from the 3rd millennium BC onwards and were in effect man-made islands kept above the waterline by wooden beams. Primarily a defensive tactic during the Iron Age, extended families would have resided within one of these huts, making use of local resources to get by. The Centre provides tours of their excellent reconstructed crannog as well as kid-friendly outdoors activities on site. 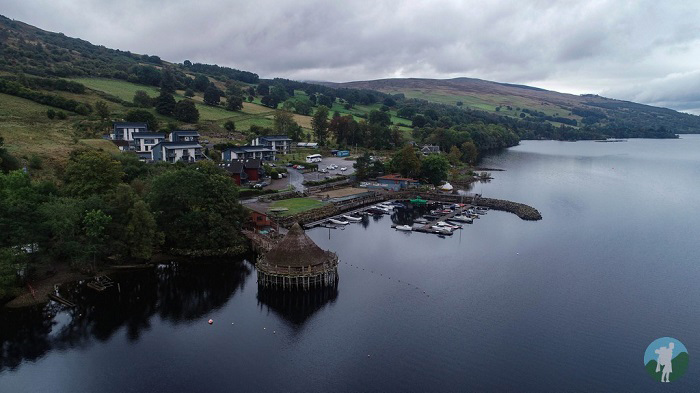 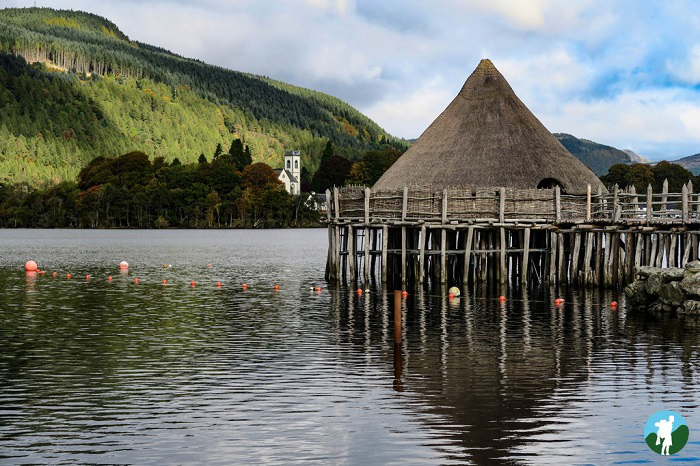 While the Lawers range holds numerous excellent peaks worth bagging, it’s the lower level walks that really capture my attention in October. The Birks of Aberfeldy is well-advised but even better is the trail at Falls of Acharn. Allow around an hour for the straightforward circuit route up to the gushing streams, following your ears. Starting and ending in the little loch-side village of Acharn, there’s a solid chance you’ll have it entirely to yourself. On the descent, pop into the 18th Century Hermit’s Cave (have a torch) and walk in the footsteps of Robert Burns and William Wordsworth to emerge facing the main waterfall. Give this a couple of weeks and the colours will be insane.

I’ve chosen to regard Dunalastair House as Robertson Castle. My Castle. Mine. I’m merely waiting patiently to stumble upon some spare millions to restore it to its former glory and have myself a Highland writing retreat. Tours will be available and the Outlander cast will be more than welcome to visit any time so that we can talk about the Jacobites. In the meantime….. 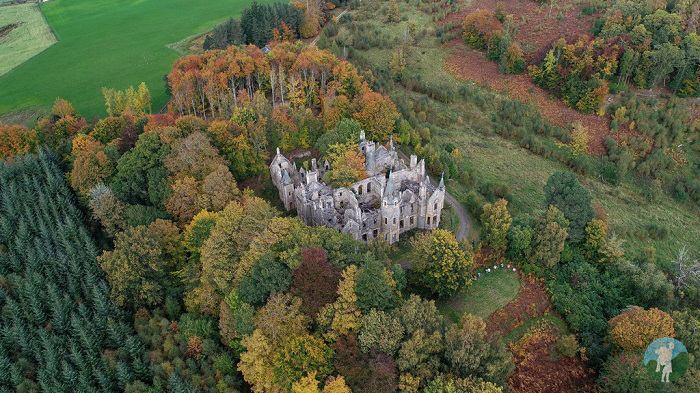 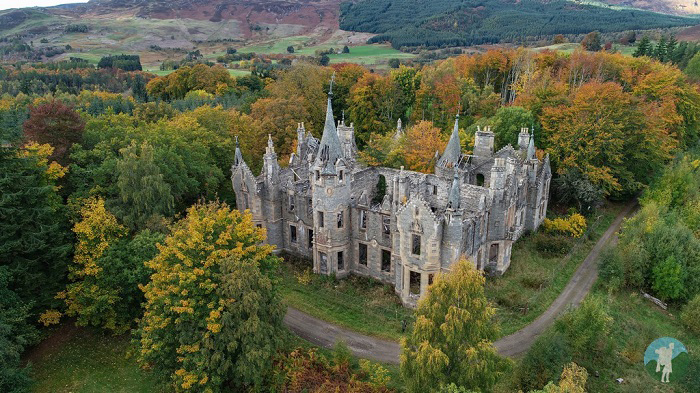 It’s something of a tragic delight that this magnificent ruin sits in such a state, awaiting my cash injection. Impossibly atmospheric and foreboding, it provides a dictionary definition of haunted house. Scots Baronial in style, it’s mid-19th Century timeline harks back to grander days for the Robertsons/Duncans. The ruin sits on or very near to the site of the original clan seat, destroyed post-Culloden as per the punishment for most Jacobite-supporting clans. It’s now a case study of opulence-gone-sour as unsustainable upkeep costs led it into ruin following the First World War.

Note that it is painstakingly fenced off and that drone flights and vehicle access are no longer permitted here, as signposted on site.

Further west on the maze of remote roads weaving through this unexplored region of Highland Perthshire, lies another bizarre relic that few have ever heard of. Eilean nam Faoileag is a tiny island sat alone in the middle of the Loch. Bizarre, and seemingly of no function or purpose whatsoever, it’s the Scottish equivalent of one of those tiny islands where shipwreck victims wash up on in the Pacific, with just a solitary palm tree and encircling sharks for company. 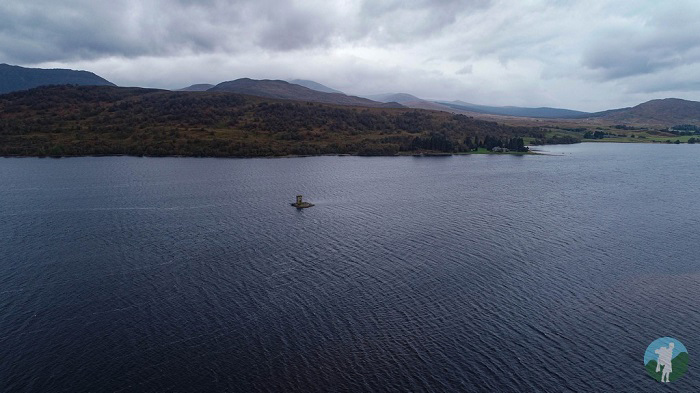 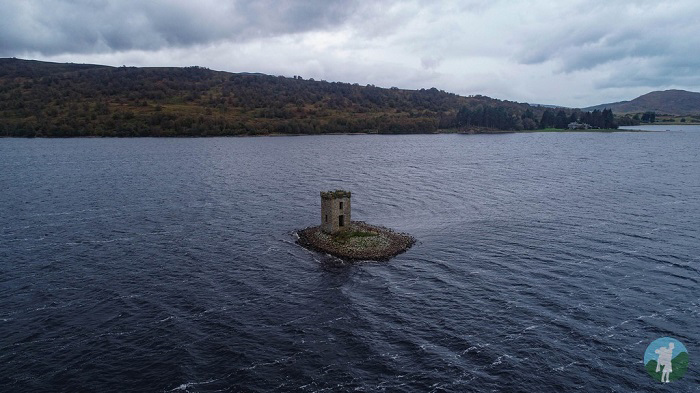 In lieu of tropical additions, we have a grim folly tower instead. This is supposedly the 19th century reconstruction of a prison which was used on the island by the Robertsons of Struan. While taking a second to observe that this is an absolutely bloody brilliant place for a prison, there’s also a legend that the Robertsons (when being chased by the baddies) would head for the island (accessible via a long-since-submerged hidden sandbank only they knew about) and leave their enemies to drown in their doomed pursuit. Superb. Dinnae mess with the Robertsons.

Where to stay – Scotland in October

Perthshire has no shortage of accommodation and most types are well covered. I was after something modern and practical, self-catering but helpfully located. With all the possibilities of Loch Tay before you, the Taymouth Marina presents an ideal option for solo travellers, couples and families alike. An excellent choice as a base for outdoor adventurers and, equally, for a chilled out, switched-off weekend. In autumn, there’s a nice tranquility about what I’m sure is a busy wee place in peak season. 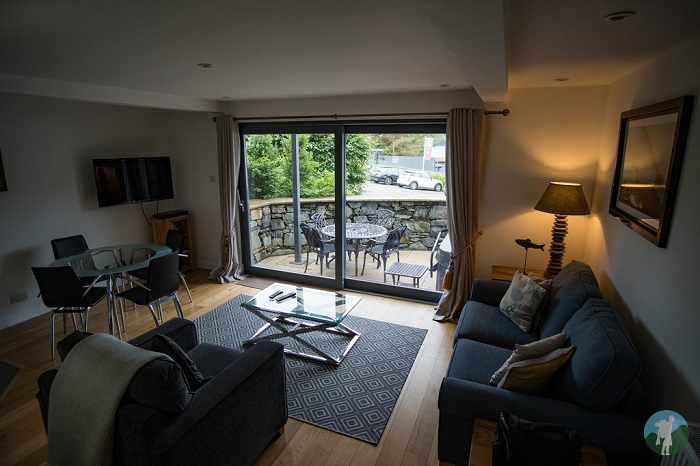 Their on-site facilities include a sauna, steam room, hot box and a slide that’ll plop you straight into the Loch for all the wild swimmers out there. The apartments even have their own private hot tubs, with views directly over the Loch. Highland luxury indeed.

Although invited to stay at the Taymouth Marina as a guest, my recommendation of them as an excellent Perthshire base comes entirely from honest and recent experience. They provided everything I was aiming for from an October break and then some.

Travelling Scotland, with a Difference

The Superb Drive from Glasgow to Mallaig