The light sneaks through the cracks on the final few steps along the meandering Siq. The shaded pathway draws to a close and spills out into a moment never to be forgotten. Petra. Early morning rays sear intensity down over Jordan’s most famous spot, the Treasury building of this hidden city. They cause the rock to beam in pink, every intricate detail of this extraordinary feat of ancient human endeavour on eternal display. Dazzling and aweing in a way that is very rarely felt, this is truly a world wonder.

The Siq is the narrow gorge that snakes its way into Petra over a half mile walk. Anticipation mounts nicely throughout. It culminates in that breath-taking moment that will be with me forever. Emerging from the narrow path into the grand opening between the vast walls of rock and my face-to-face meeting with the Treasury. 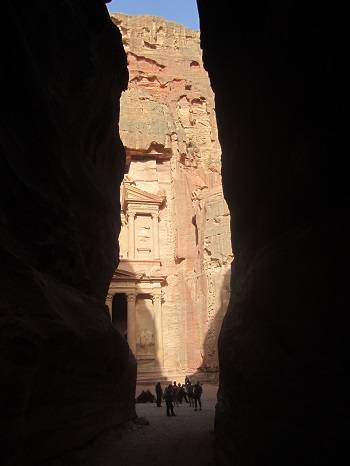 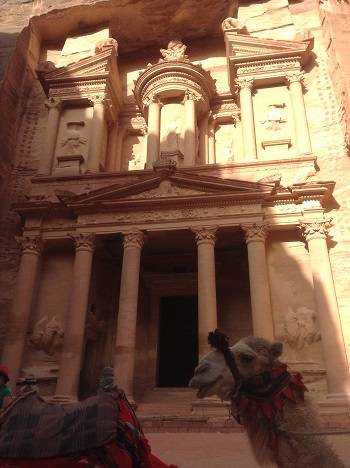 Tucking away my awe for now, my day-long exploration of Petra must commence. The path opens out further into a vast arena and the humble modern day visitor is surrounded on all sides by never-ending tombs carved intricately into the rock. From here, the logical journey from the Treasury to the Monastery delivers an experience into the very heart of Petra. Passing the likes of the ruins of “Palace of the Pharaoh’s Daughter”, the Great Temple, the vast and image enticing Theatre and finally the gobsmacking Monastery, it’s not a walk to be rushed. Childhood heroes of mine including Indiana Jones and Tintin have seen their adventures based in this very place. Every step builds me up more and more. I’m an explorer! 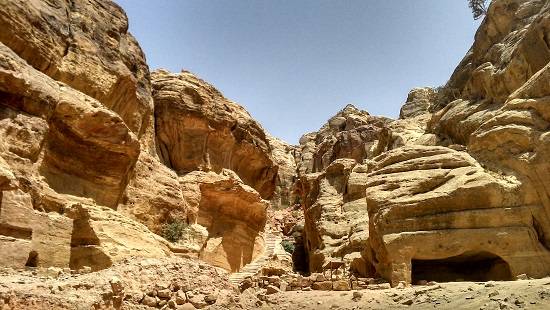 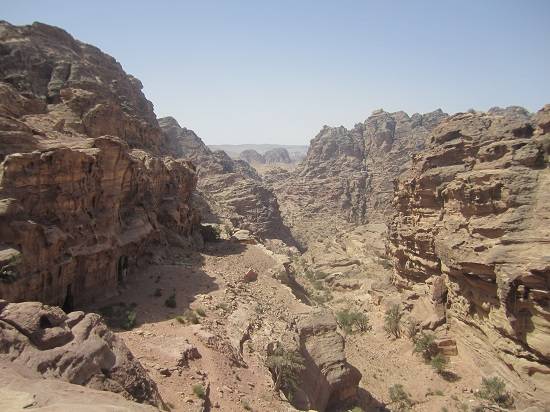 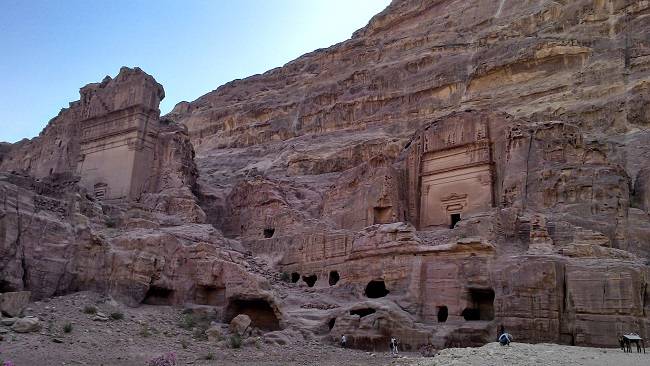 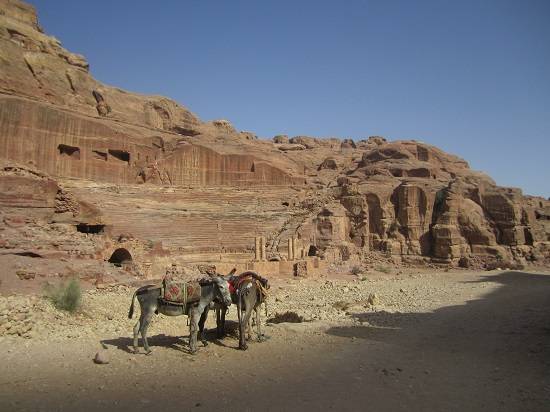 The Nabateans came to Petra in the 6th Century BC. Their logic for carving a city into the stone, unforgiving climate and all, was to take advantage of the lucrative potential of the spice route between the middle-east and the Mediterranean. Images run wild in my head of carts packed with cumin, coriander, sumac and cinnamon rumbling over these hard and dusty tracks. Throw in some moustachioed brigands and you can see that any adventure novelist has a plot right there. In its heyday, Petra grew to be able to hold tens of thousands of people. The Romans, who got around, didn’t take kindly to Petra’s prosperity and came along in AD 106 and their influence in some of the architecture is noteworthy despite their stay not being a lengthy one. Earthquakes and the power of the ocean as a trading opportunity then meant the city’s decline and journey into mystery. It was not really until 1812 when Swiss explorer (and one of the luckiest men that’s ever lived) Johann Ludwig Burckhardt re-discovered this extraordinary place. Can you imagine? 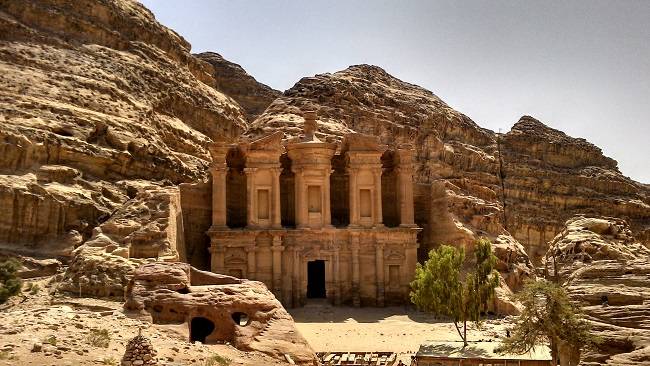 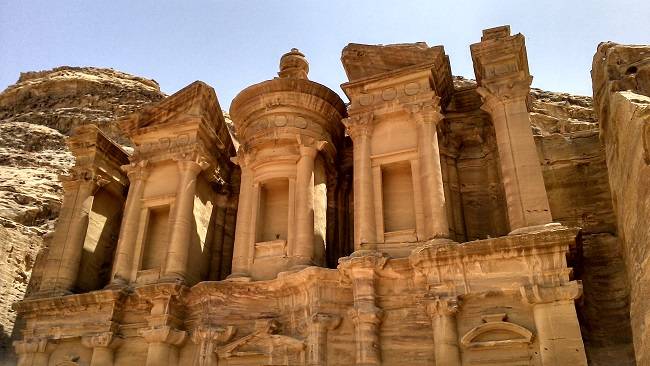 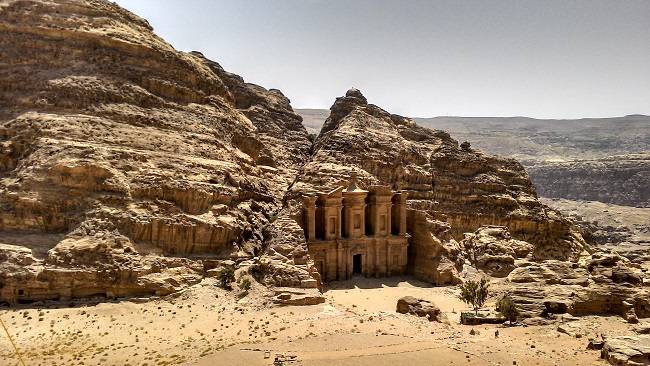 I think Petra needs a full day, or more, to explore. Don’t necessarily do what I did though….

Having been and seen and marvelled at the stunning and most famous aspects of Petra, my customary drift away from the well-padded route took me and my initially enthusiast partner on the lonely ascent to the High Place of Sacrifice. There’s a title that bodes superbly. Not at all said I, probably just some symbolic gibberish. Trust me, I’m a travel blogger. For now, her faith in me holds. Fast forward an hour or so and I can feel the glare in the back of my head intensifying. Searing heat, nowhere to hide, no-one seen for ages, water running low……All the while I’m merrily carrying on – increasingly convinced that I am actually Tintin – oblivious of any prospect of impending death and dragging my increasingly bedraggled looking better half in reluctant tow with me. Every now and then I’d look back over my shoulder and cheerily announce that we were ever-more-certainly “nearly there”. She would quite happily have impaled me with her hiking stick at my third such declaration if she’d had the energy.

To cut a long and expletive-ridden story short, we both survived the sacrifice. My endless enthusiasm of the day did not. Only take this route if you have company, litres of water and are hell-bent on defying whichever nutcase decided this route should not be cordoned off for 21st Century travellers from Scotland with pale skin and in SOMEONE’S case, red hair. We were later to learn that we would not have been the first to wander off on a bold gallivant around Greater Petra never to return. Do not underestimate the size of the city. 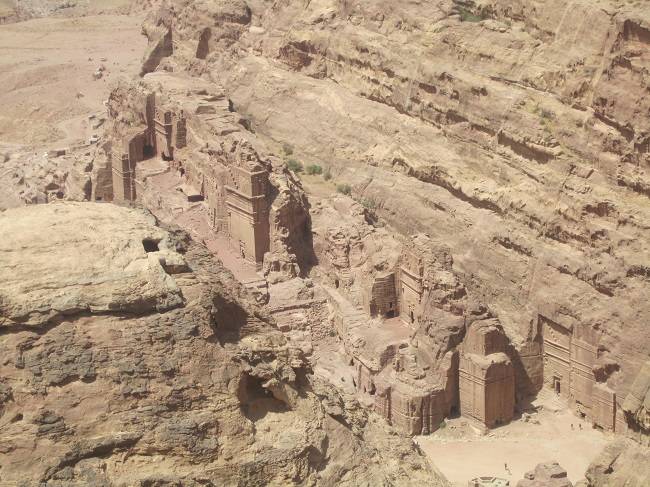 Complaints aside, the stunning views looking down over Petra made for an image never to be erased. The discovery of endless empty caves carved into the stone and, yes, the total solitude made even this particularly challenging part of the day extra special.

The significance of the journey is in the memories – Petra will always have plenty of those.

Why Glasgow is fast becoming one of Europe’s top cities

Is the Isle of Harris the most stunning area of Scotland?