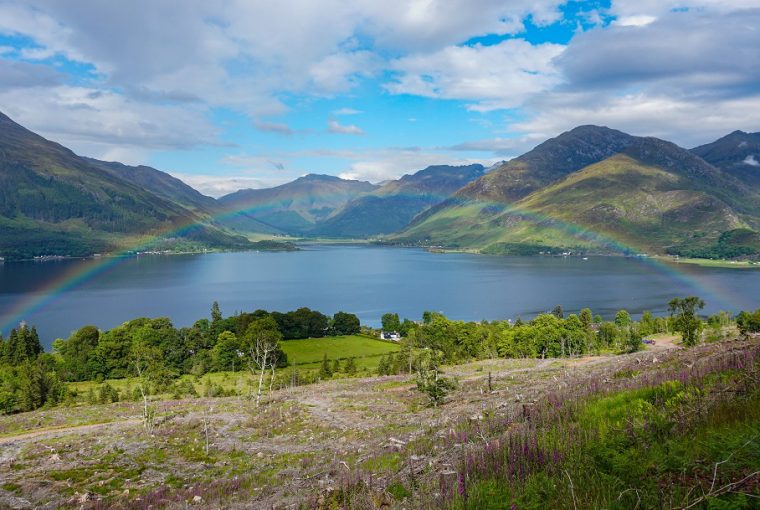 Things to do in Glenelg and the Search for Escape

While madness descends on much of the Highlands at this time of year, I feel an ever more urgent need to find tranquillity. This most recent drive north – to Glenelg, just over the water from Skye on the mainland – is one where I intend to re-visit my recent search for ‘immersion’. To switch off. And to find at least a few hours of total solitude. I’ll be doing the blogger thing and looking at interesting things to do in Glenelg, yes, but I’ll also be seeking out one of the greatest gifts that the north west has to offer. If only I could put my finger on exactly what that is….

I went on passionately about the appeal of Scotland’s Western Isles in a recent blog. That’s a part of the world that is effortlessly enchanting and seems to fuel and replenish its own soulfulness from the Atlantic itself. Here is different, and comparisons are inevitable. I don’t feel soul so much as I feel a haunting. It’s as if the sea breezes keep the Outer Hebrides dynamic and the battery levels never fall too low as to cause concern. Here, there’s a stillness. There’s cobwebs. Nature is more apparent, and I feel its….age.

Getting to know Glenelg

When I picture myself having a conversation with the Outer Hebrides, I’m talking to a crofter. He’s in charge by the way, I’m just doing as I’m told. He thinks I’m ok but not much is said, his chat is somewhat wanting and I’m being, just about, politely tolerated.

When I’m talking to Glenelg, she’s an old woman. Also not saying much, and more about gestures and knowing facial expressions. She can see right through me and doesn’t think much of me, knows I’ve got much to learn. Two decidedly different, but equally non-verbal, conversations.

Ian Fleming, creator of James Bond, has roots in these parts and a house belonging to his father is still here. I hunt it down, at Arnisdale, a beautiful drive further down the coast. I can see Bond here, actually. A fanatical reader of Fleming’s work as a youngster, Bond was very much a teenage hero of mine. But he certainly wasn’t the cheery, debonair gent that Roger Moore, and even Sean Connery, personified. No, Fleming’s Bond was a serious, miserable bugger that enjoyed solitude. I can see a young 007 here, influenced by this remote corner of the world, just as Fleming would have been. 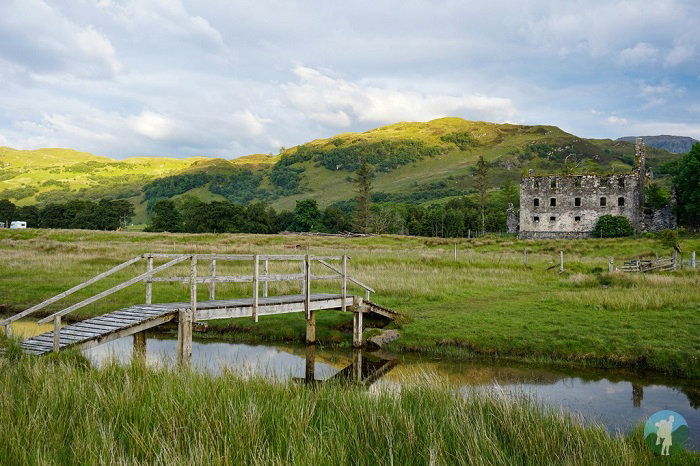 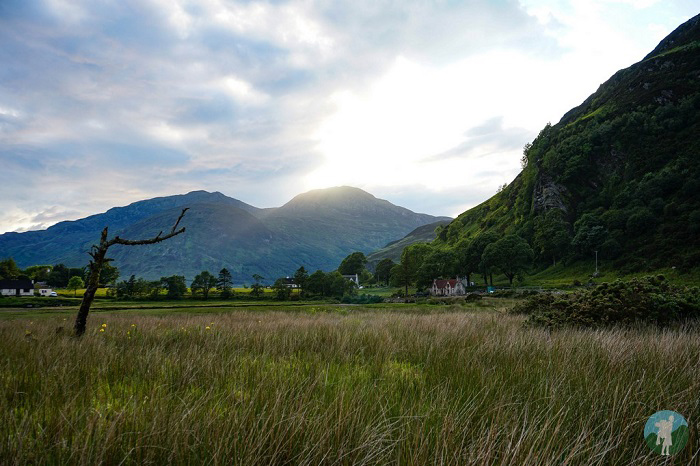 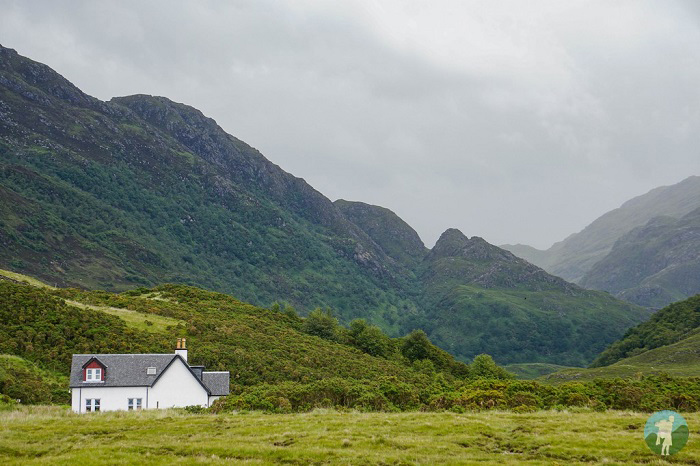 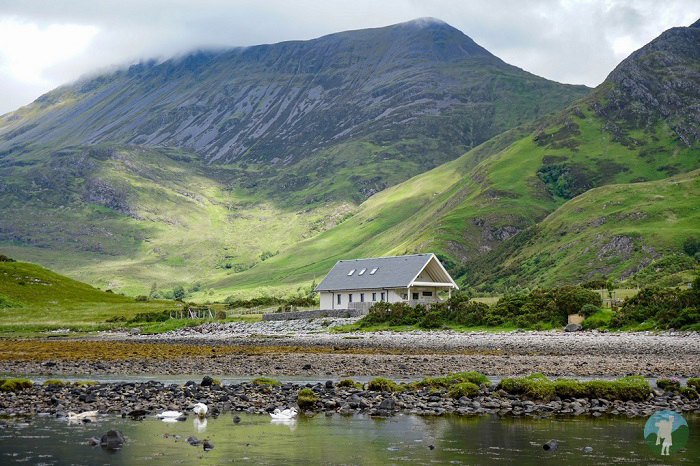 Taking the winding drive from Glenelg to Arnisdale, and even a little further to Corran, makes for a great mini road-trip to get you introduced.

Out for a Walk, Broch Stalking

Very underestimated thing, brochs. Castles get all the hype in Scotland – something I’ve not exactly done much to diminish – but these robust little mysteries are our own Pyramids. Iron Age relics, they only exist in Scotland and were largely limited to the north and west of the country. Today’s Glenelg grouping are on a very short list of those that remain standing.

The walk south from Glenelg village into Gleann Beag itself follows the coast first. It’s a blowy day, grey, unhappy. There’s the odd Scottish Highland shard of light searing through the thick cloud, but nothing to get excited about. Natural inland coastal beauty calls, with a terrain that reminds me of much of Argyll. Old country. 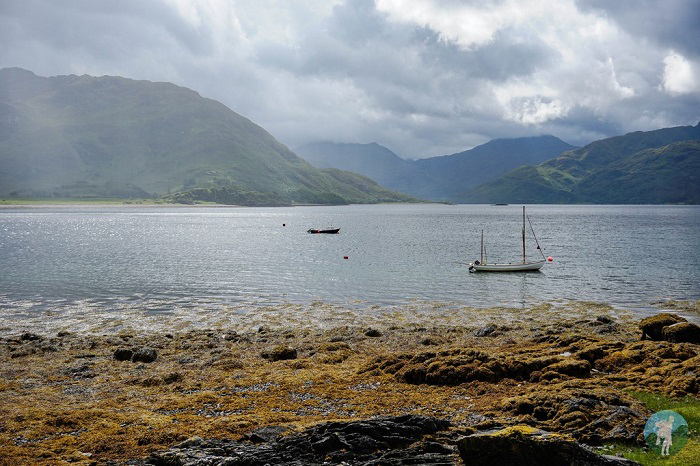 I’ve got no phone signal. Good. I don’t wish to be disturbed today.

There’s the odd coast-facing house but very little by way of activity and I’m certainly the only one doing this lengthy, albeit very easy, wander on foot.

It’s the kind of day when this journey makes no sense. Good.

A thick musk has clandestinely consumed the glen. Not rain, and considerably more sleekit than drizzle, this is the stuff that’ll pinch your wallet and soak you through while you’re blissfully unawares, roamin in the gloamin. In all directions, omnipresent, is water.

Turning inland, the road is in surprisingly good nick, despite this fairly obscure little adventure that I’m having with myself. Not much out here. There’s the odd stream tumbling down from higher heights, and trees in abundance but, other than that, this is just a lonely Scottish valley doing its thing. 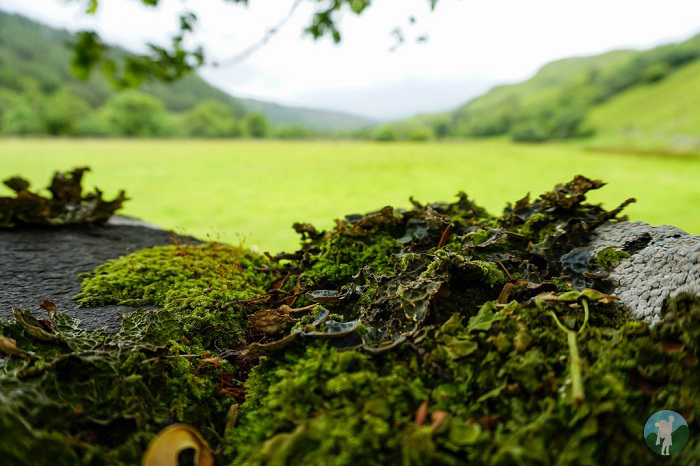 You remember being a kid and playing outdoors? Not the organised stuff, sports and all that. No, I mean the rough and tumble, treehouse stuff with dirty hands, nettle stings and grass stains. That’s what comes to mind just now. It’s always nice, I think, when childhood memories, smells and feelings come to mind. I used to love that stuff…..when going indoors was like some kind of crime and you’re never more comfortable around nature. What a sorry state of affairs it is when we, as a society, can’t go and play in the mud when we feel like it.

Of course, we can hike, and that’s lovely, but it’s planned. There’s usually tracks to follow, you’re rarely alone and you have a very clear objective in mind for your efforts. It just makes far too much sense, things shouldn’t always need to make sense. So, this is as close as I get these days to that little boy in the mud, bouncing around monkey-like in the trees, taking risks that would have parents apoplectic.

Walking for the sake of it. Just because.

Increasingly grim visibility and in a dishevelled state, that I’d barely noticed, end with me at the first of three broch structures, Dun Telve. It sits on the floor of the Glen, with precipitously steep slopes to the south and gentler rollers to the north hemming it in. The cloud obscures the higher summits with Highland menace and I’ve still got the whole place to myself. A gigantic waterfall tumbles in the distance and for a brief moment I curse the rain and not having my drone to get a better look. 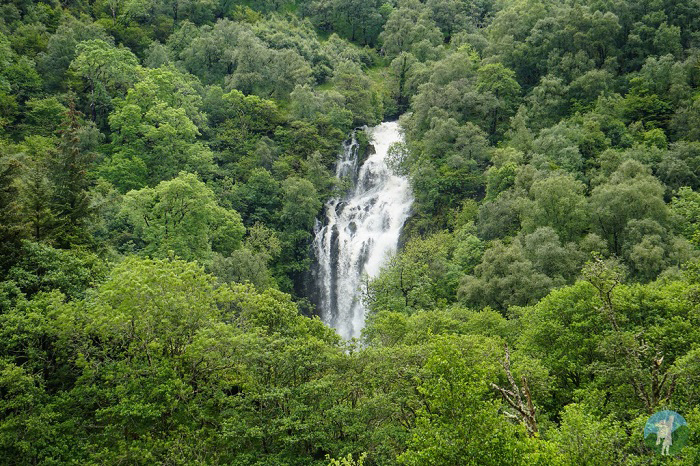 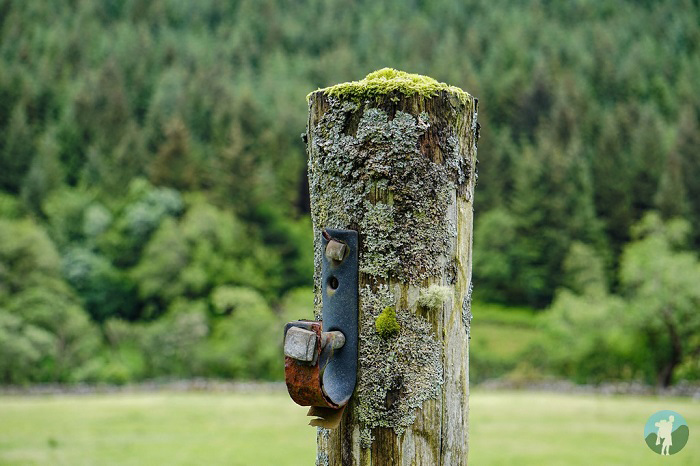 No. That wouldn’t be fitting here, rain or otherwise. Today should be about something else.

As I approach, Telve looms into sight like a prehistoric beast. Beautiful, mysterious and imposing. I don’t talk about these things enough, stop doing that. Moss and vegetation have been abundant throughout this sojourn but nature’s best efforts at attempted reclaiming are most apparent here. 2000 years of effort have failed, however. These things are here to stay.

I’m walking among ancient footprints. The structure goes as high as 10 meters and double that in width….and is remarkably intact. Certainly, it’s robust. That would stand it in good stead against the weather. Why do they exist though? 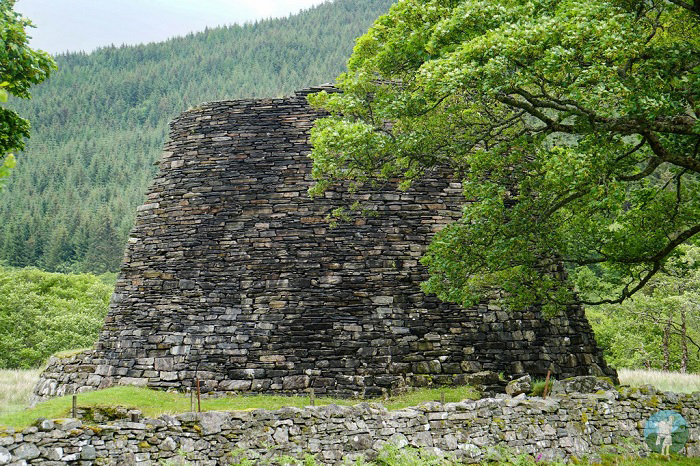 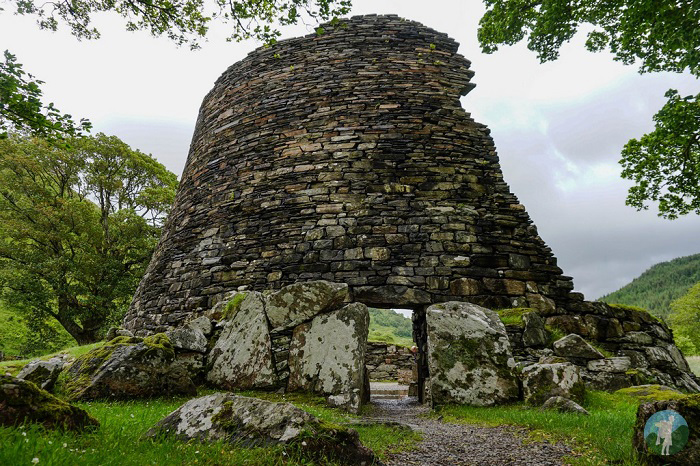 With wonderful Scottish mystery, we don’t know for sure. Defence was probably a consideration. Status, too. My broch’s bigger than your broch. Sentry points or warning stations have also been mooted in archaeological circles. Regardless, these stone beasts would have been occupied by numerous people, living, probably under a roof, and taking advantage of nearby natural assets to survive.

It is extremely unusual to see two mighty Iron Age relics in close proximity. Yet Dun Troddan (someone clearly had a sense of humour) is just a few hundred metres from its neighbour. Built on a slope, this one feels more in the sentry mould, with fine views down the Glen to warn of any advancing threats. 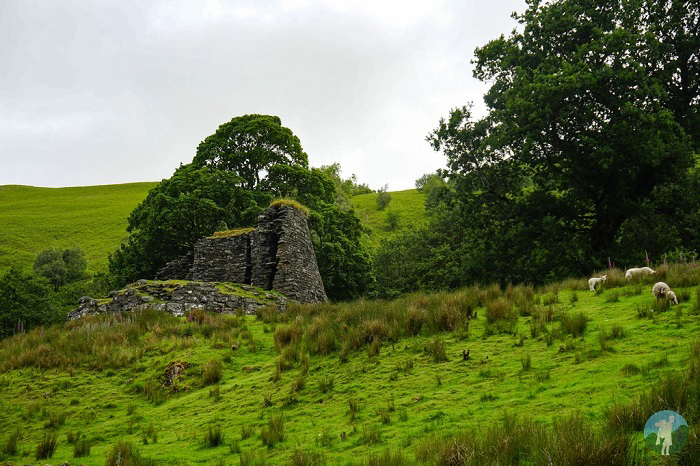 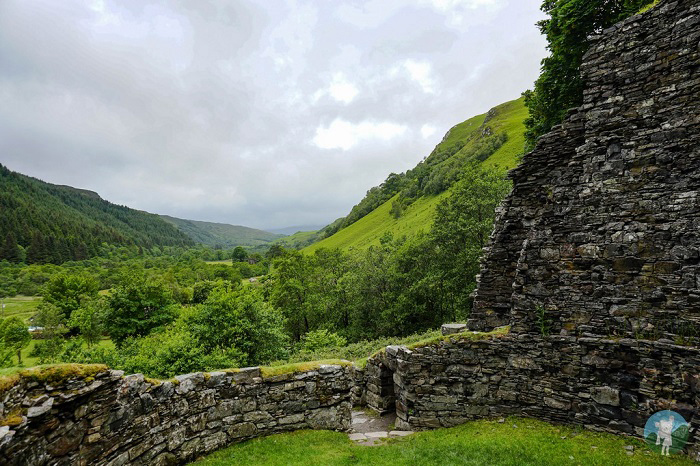 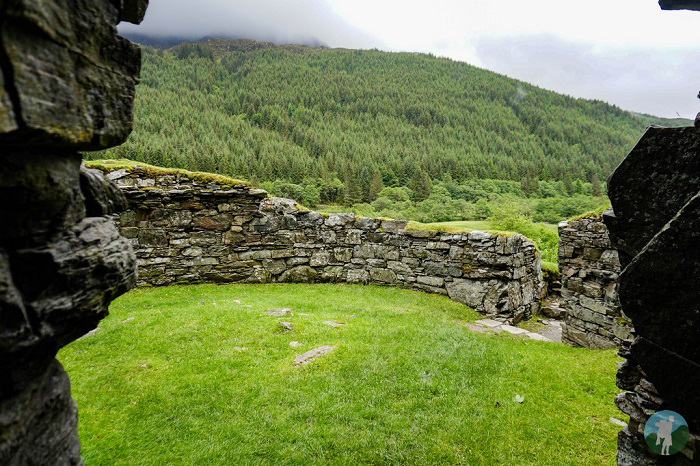 There’s a thought. We worry about Brexit, mortgages and climate change. Quite rightly so too, we’re in a right bloody mess. These people worried about frothing-at-the-mouth murderers, rapists and thieves coming over the hill with slaughter on the brain. Times change, worries evolve.

This one is in a slightly better state and I take temporary shelter (although I’ve reached a place where the rain no longer bothers me in the slightest) in the alcove passageway within. Flask of tea, cereal bar.

This is probably as un-Instagrammable as a human being can be. Good.

Very few people take the time, or are even aware, that there is a third great broch of Glenelg. Today, I am very few people. 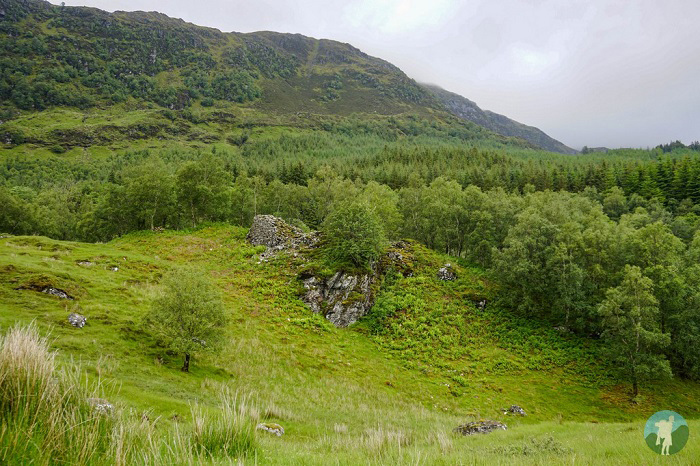 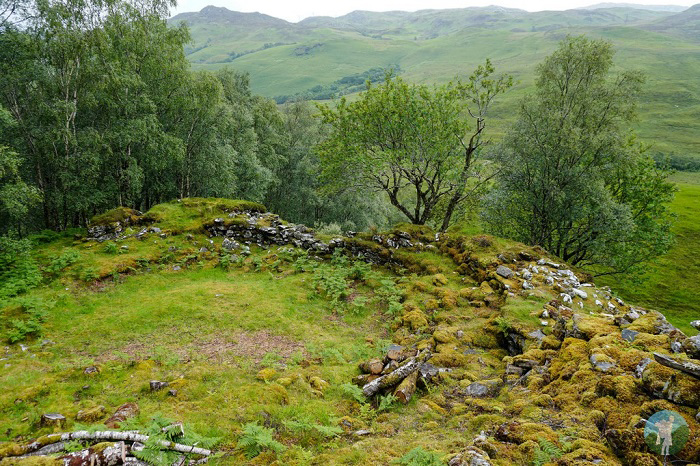 It’s not as well preserved, it’s not as evocative, but hunt it down. Dun Grugaig is some distance further into the Glen, maybe 45 minutes of a brisk walk and you’ll see few signs of human interference the further you go towards the head. It’s a place for Braveheart-style music, almost overpoweringly Highland in its rugged, soaked-to-the-bone-ness and even the sheep stare back at you with pitying bemusement. You want to feel good about yourself? Watch a sheep laughing at you. 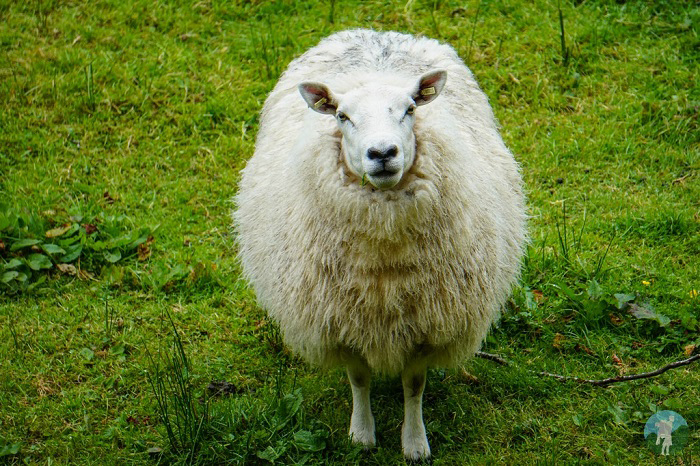 I linger at this, the pinnacle of my walk, before nodding thanks at…..something, I’m not sure what…..and starting back the way I came. The first human I’ve seen for several hours interrupts wherever it is my mind has gone and he smiles knowingly.

“You found it then?”

He’s clocked I’m Scottish but is yet to establish if I’m mental. “You found the last broch. No many folk get tae see it.”

Shit, yeah, wakey wakey. “Ah did aye, knew I had tae make the effort. Worth it.”

“Good fur you.” I’ve passed the test – I’m eccentric, not mental. “Av got the road tae clear but wasn’t expecting to see anyone out the day.”

Small talk ensues for a bit as we debate the merits of brochs way out here, and the fairly dismal year of weather we’ve had so far. I leave him to it, on reflection glad to have had my day of solitude interrupted for a time.

The Power of Escape

Quite the journey, with a few morals for me to note. Don’t just go for a walk because it’s sunny. Work with whatever the environment has for you – in Scotland, that probably means wind and rain. Don’t let those bother you, it’s part of what’s necessary to have a deeper connection with where you are. Who cares if your hair’s a riot and you look like you’re auditioning for a Highland apocalypse movie, the folk that lived here in centuries past looked like shite as well. And smelled worse.

Where you go to do all this is largely irrelevant in the Highlands. It helps to be remote, sure. It’s nice that there’s some history to cajole your imagination. But it doesn’t need to be ‘stunning’. What an annoying word that’s become. Glenelg isn’t stunning. It’s nice, it’s pretty, but does it visually blow you away? Certainly not in the conventional sense. 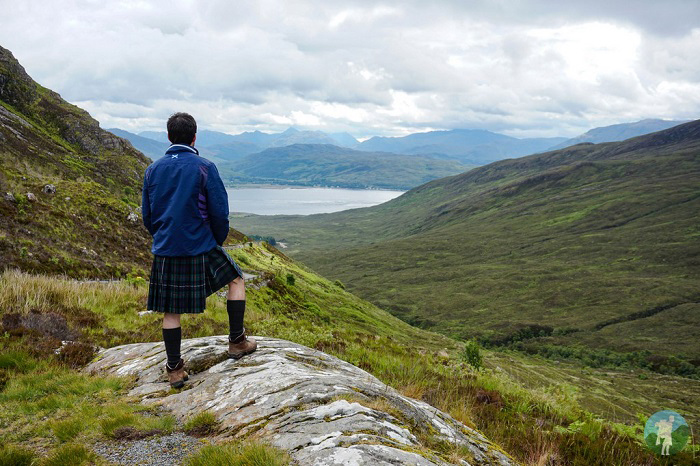