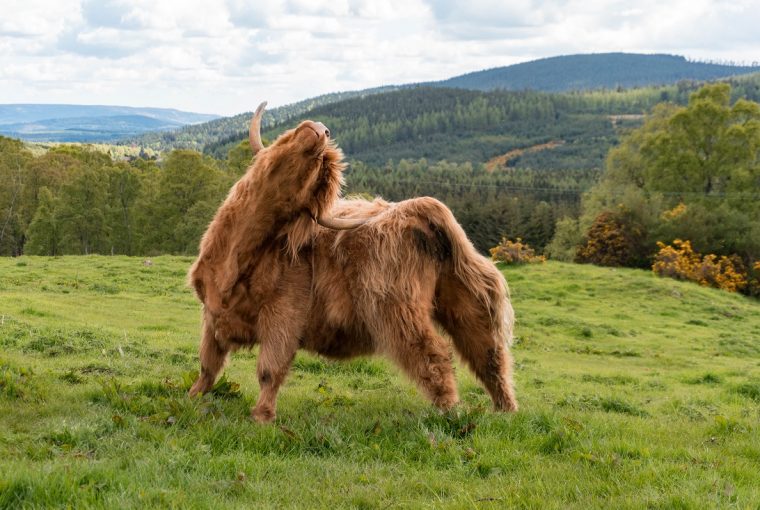 Road Tripping Through Aberdeenshire and the Cairngorms National Park

It’s that typically lovely time of year in Scotland, May, when most in-the-know travellers descend on our outdoors in search of midge-free zones and almost predictably calm weather. Time then for the first Scotlanders campaign of the year as we take on one of the most epic drives in the land, the North East 250. Splitting the giant into four, we unearth the best things to do in Aberdeenshire, the Cairngorms, Speyside and the east coastline in another frantic weekend of activity. For my contribution, I’ve locked gaze with the southern stretch of the route – that tumbles through the rigours of the Cairngorms but lands soft, in the gently welcoming landscapes of Aberdeenshire. A journey of extremes awaits.

This is my third trip of the year to Britain’s largest National Park, and I was a frequent visitor last year as well. This recent immersion has brought on probably my single favourite thing about travelling – destination authority. That feeling, no, that knowledge, that you’ve come to really understand a place on a much deeper level than previously. The satisfaction that you’ve taken on board more than just a fleeting, surface-skimming appreciation of what makes a place tick and what lies deeper within.

Key to nudging my emotional attachment up a level has been the work I’ve been doing on the VisitScotland podcast (coming very soon) and, particularly, my reading of Nan Shepherd’s ‘The Living Mountain’. There’s possibly never been a more emotionally charged depiction of an area than her work (written during the Second World War) which broadcasts a local’s love for Aberdeenshire’s landscapes with a depth of unparalleled descriptive detail. More about that in the podcast though, stay tuned.

Bottom line, the Cairngorms is raw, inhospitable Scotland at its most magnificent. Sub-arctic landscapes that are home to 5 of the 6 highest peaks in Britain, barren terrain that few species can handle and, naturally, vistas to die for. At its most severe, you’re facing a Winter Is Here scene from Game of Thrones that even whisky won’t thaw. And there’s the appeal.

Approaching the western and southern limits of Aberdeenshire at Glenshee, travelling over the superbly named Snow Roads, you’ll pass into ski-ing territory. A route that is often impassable in full-on winter conditions, this is when gentle Perthshire is left behind and the ears start to pop. 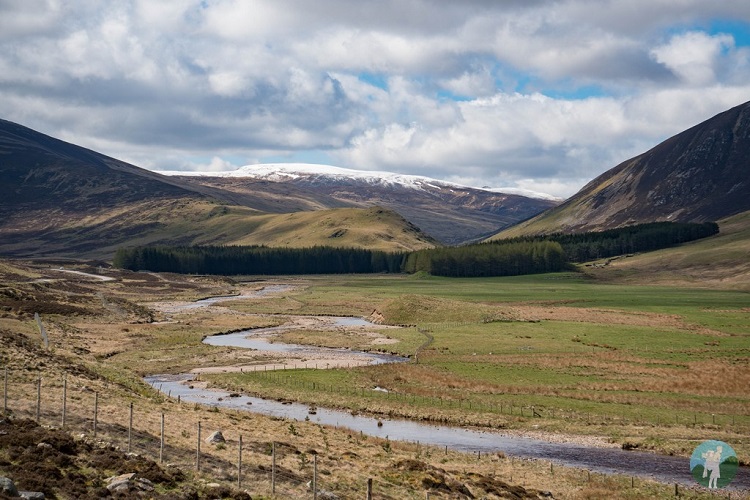 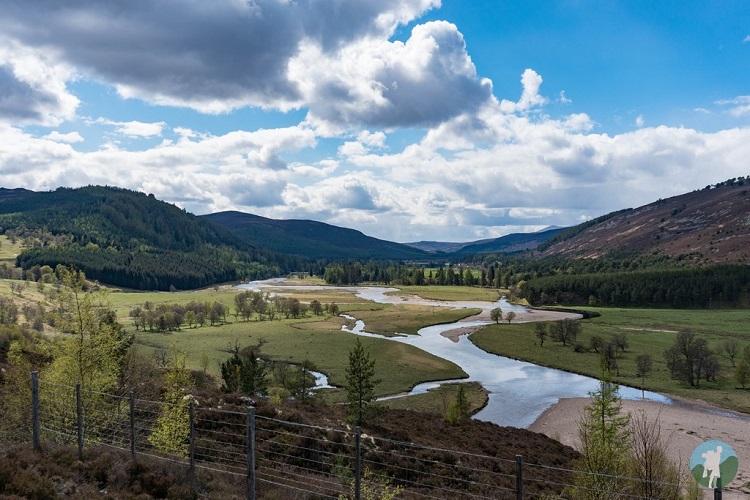 Perhaps the best ease-yourself-in place to head is the Mar Lodge Estate. All the rugged stuff will tease you plenty, but this is first and foremost a nature conservation spot. Straightforward (and more challenging) walks begin and end at the Linn of Dee car park as opportunities in Glen Lui present themselves between armies of Scots pine trees. The estate encompasses a massive 29,000 hectares and holds 15 Munros within its grasp. This handy map shows some of the low-level walking options and, even on a very tight schedule, I managed to fit in combinations of all three. 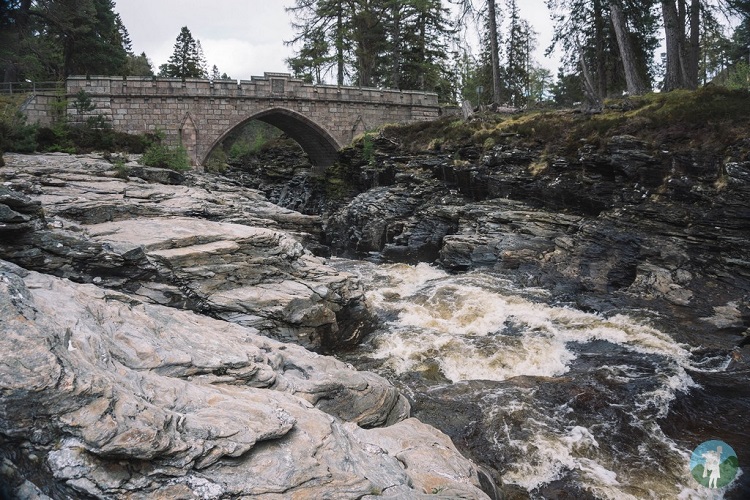 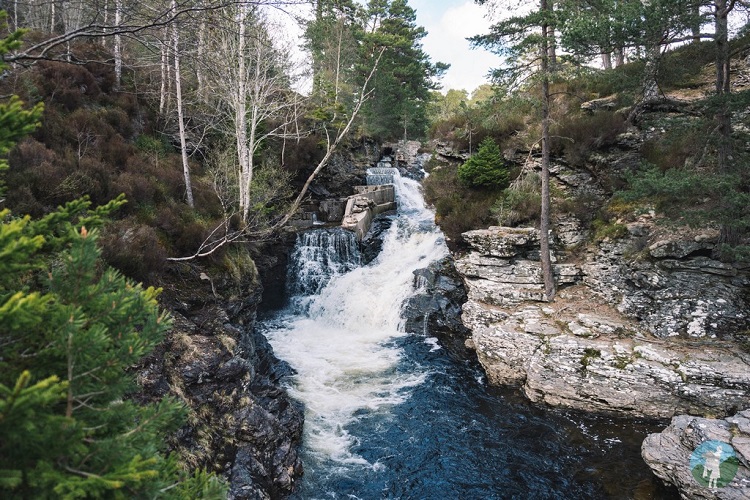 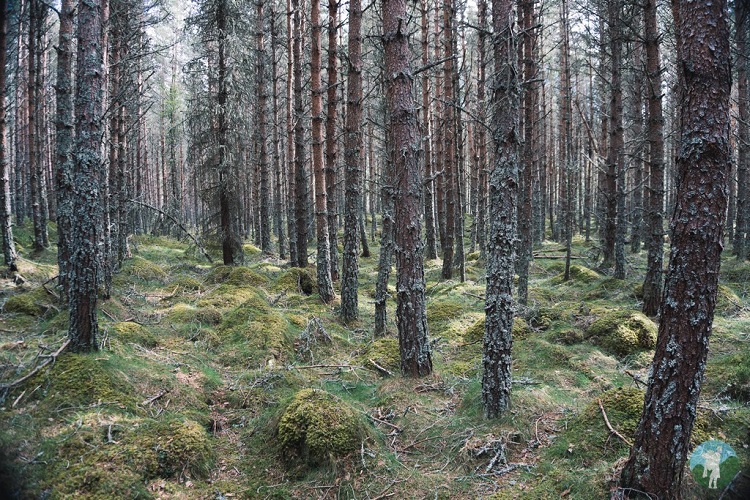 A doze of Highland human history is always called for, even in such nature-heavy areas. As we start to approach the riches of Aberdeenshire’s castle country, Braemar Castle pops up to say hello. A robust, turreted tower, the structure goes back to 1628 and has been home to the Clan Farquharson since the mid-1700s. Community owned and staffed by a wonderful team of volunteers, it’s a must for Scottish castle fans. A Jacobite thread weaves its way into its past as government forces were based here during the 1745 rebellion. It had previously been burned in 1689 by Jacobites, precisely to prevent such a circumstance. 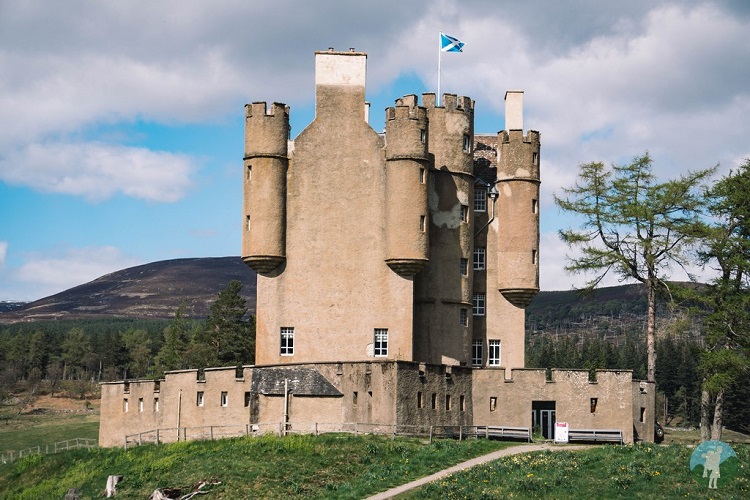 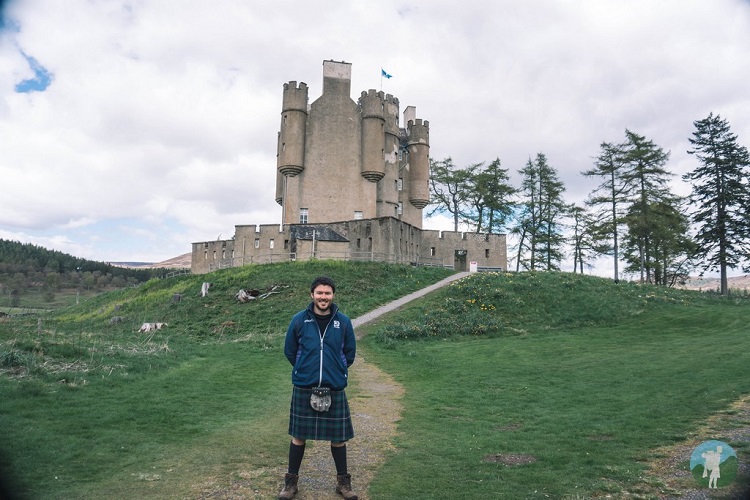 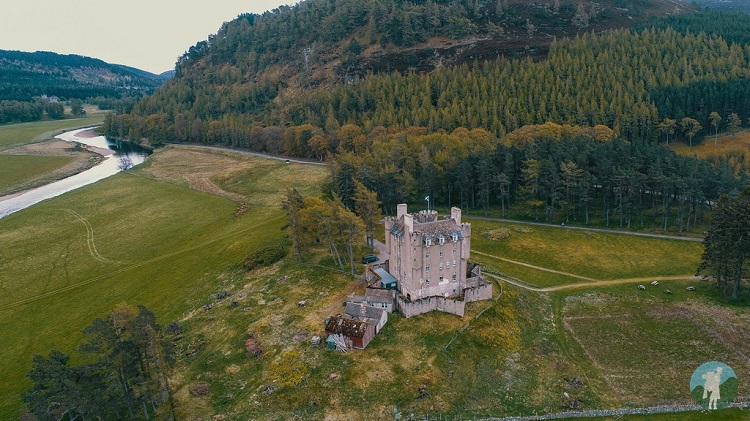 Where to Eat and Stay

I encourage total immersion. Braemar village is a picturesque wee place, ideal for a food stop or a base for further exploration. Go full Scottish with salmon and haggis at the majestic Fife Arms Hotel where the regal side to Highland charm calls invitingly. To sleep, Cairngorm Lodges further west was the perfect way to doze off in comfort amid the pines, merging seamlessly with the overpowering environment that surrounds you.

Heading East – Things to do in Aberdeenshire

As I prepare to leave the National Park, I take advantage of a glorious early – very early – Sunday morning with a poke about Muir of Dinnet Nature Reserve. Park up at the Burn o’Vat Visitor Centre where you’ll have access to all the practical info you’ll need. As with Mar Lodge, various trails lie before you. 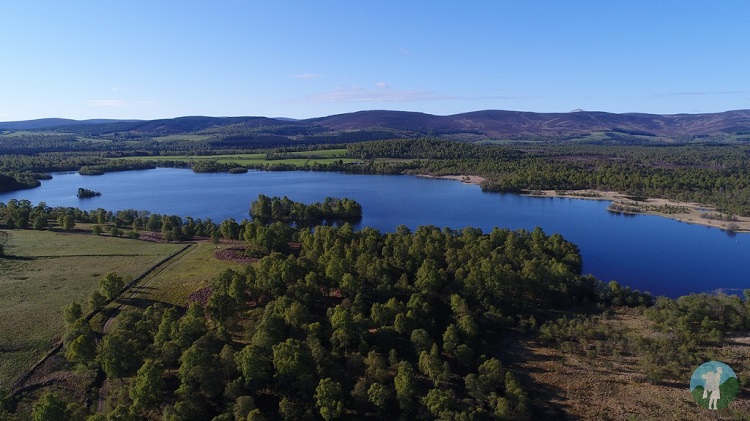 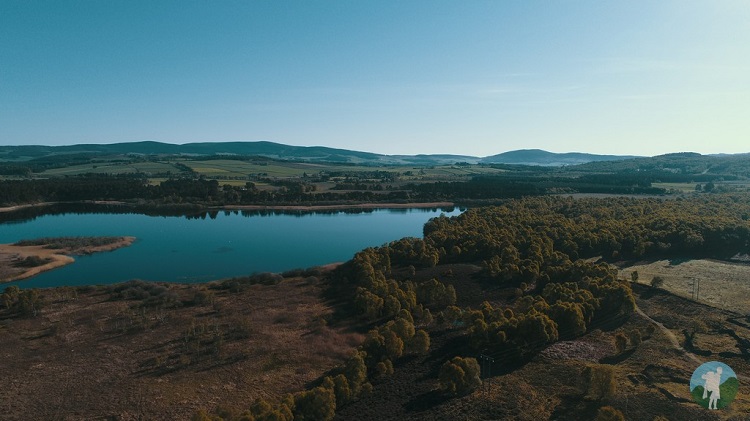 Then there were castles. You can’t possibly review the best things to do in Aberdeenshire without locking firmly onto its plethora of castles. If Braemar had the rugged, weather-beaten appeal of a Highland fortress, those historic sites closer to Aberdeen boast something different. Wealth, in a word. Aberdeenshire has long been among the richest of Scotland’s regions, with its generous farmlands and, more recently, access to the North Sea’s treasure. Going hand in hand with that come some of Scotland’s most impressive and opulent homes, estates and ancient clan strongholds.

Everything from the extravagant Royal base at Balmoral to the barely-there, freaky ruins of New Slains Castle await in Aberdeenshire. But my itinerary on this campaign kept within a close-knit geography to include Craigievar, Crathes and Drum.

That a place as immaculately, impossibly quaint as Craigievar exists in real life is of endless wonder. Set in luscious farmlands, surrounded by sprawling trees and coloured pink it’s hard to think of what more it could do. Finally being able to set the drone loose here (with permission, always get permission) was the icing on the cake of a beautiful day. A seven-storey Baronial structure dating back to the 17th Century, today it holds notable works of art and retains a domestic feel. Not one built for defence, the interior will have changed little since it was visited by Queen Victoria herself in 1879. It is also believed to have been the inspiration for the iconic Disney castle. A coveted claim to fantasy fame indeed. 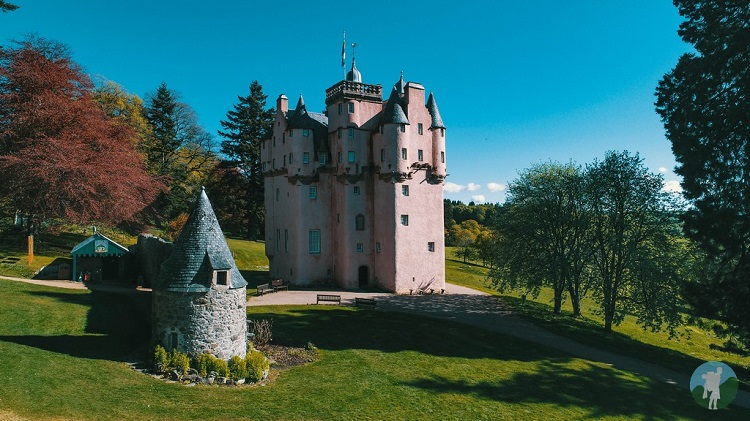 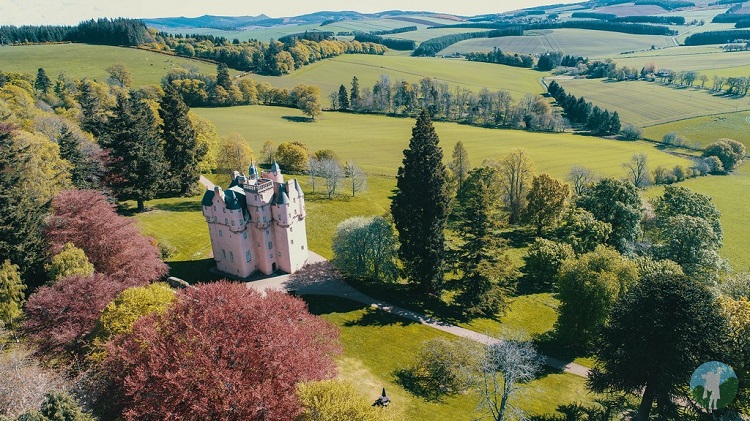 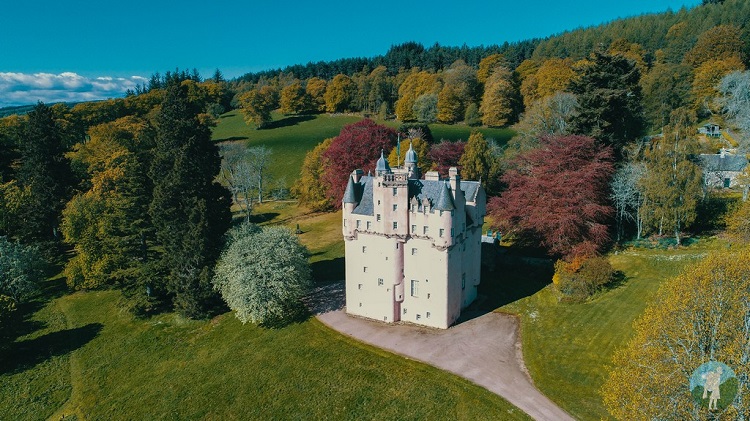 With the clock ticking on, I charged ahead to Crathes Castle. Similar in external appearance to Craigievar, Crathes dates back a little further to the late 1500s. Set on vast grounds (a once-upon-a-time gift from Robert the Bruce no less) it’s regarded as one of the finest things to do in Aberdeenshire for families. Beautiful estates call out for exploration and picnicking, while the gardens ignite the senses.

Owned by the Burnett family, the castle was another to avoid all historical conflict as the family shrewdly and diplomatically managed to avoid ever upsetting anyone. A truly astonishing achievement in Scottish history. 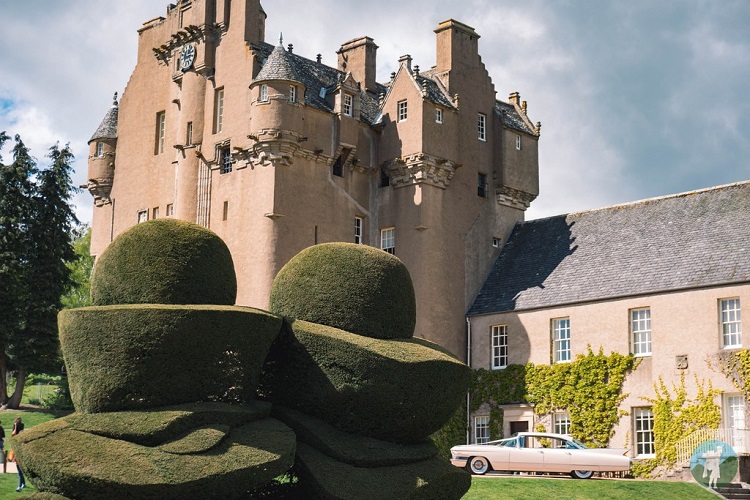 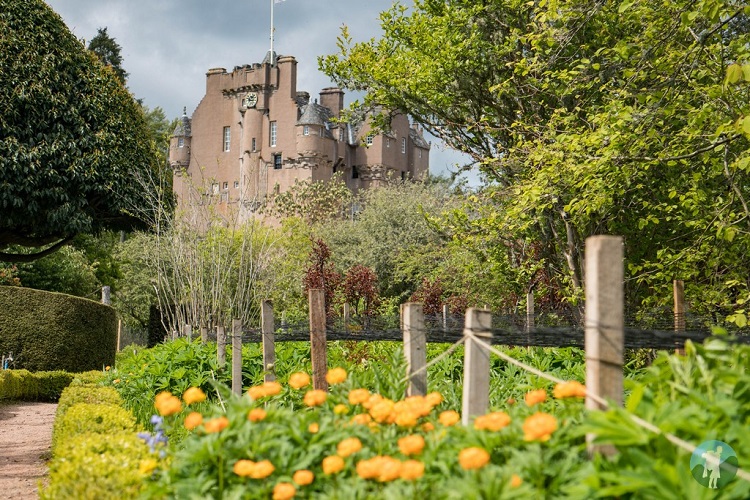 Then there was Drum. A fitting close to a head-spinning weekend of digital activity, I’ve always been a fan of this place’s story. By now on the outskirts of the Granite City, the 400+ acre estate is just about the city dwellers’ closest opportunity for a rural escape.

The east is dominated by a robust medieval tower house, the surrounding extension came into being in subsequent centuries. Resident here were the Irvine family, supporters of the Jacobite cause, and it was the 17th earl that holds the most dramatic legacy of Drum’s past. Following the catastrophic defeat at Culloden, he was forced to hide within the castle while the government forces went door to door in the Highlands hunting down survivors. As for today’s visitor experience, the most impactful room by far is the library, a stunningly alluring space where silence rules.

Drum can also boast some of the friendliest staff I’ve encountered in my castle trails and, as with all National Trust for Scotland properties, take advantage of the guided tours. 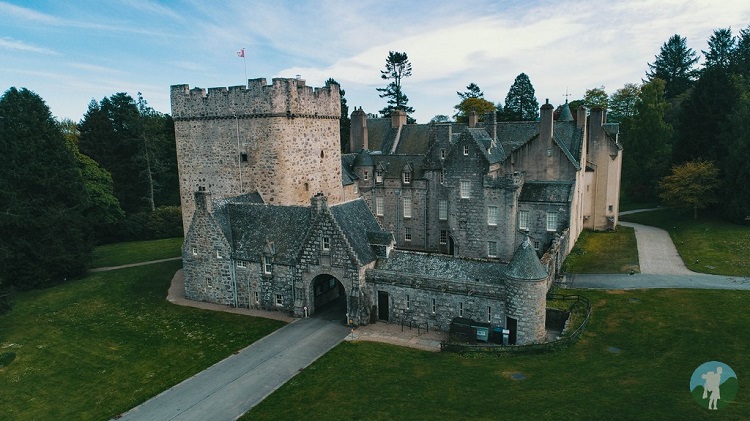 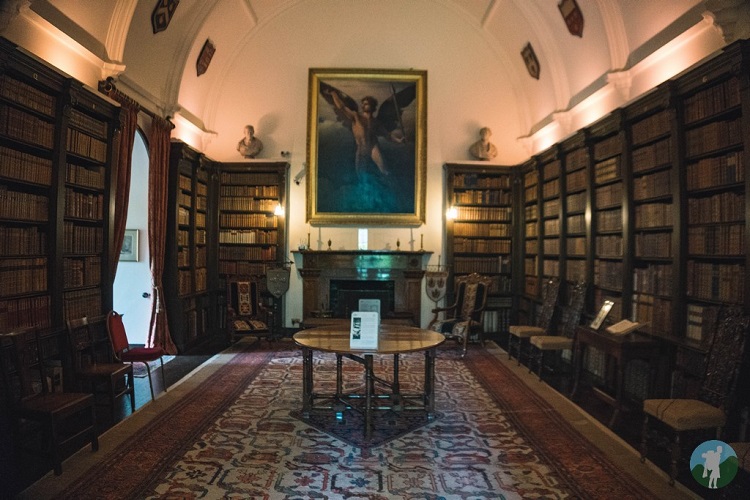 But you don’t need a castle to have an estate, and Aberdeenshire is heaving with possibilities for nature lovers that don’t necessarily want to take on the big peaks. A prime example of a working Highland estate is the fabulous Glen Tanar, on the eastern limits of the National Park. Producing vast quantities of timber and home to farming livestock, this 25,000-acre playground is also very much open to tourism. A wedding venue and potential luxury base for self-catering visitors, there’s any number of routes to outdoor entertainment.

Wildlife roam free in these parts and deer, eagles, red squirrels and more can be spotted. There’s also beautiful Highland Cows and horses sparring for your attention. 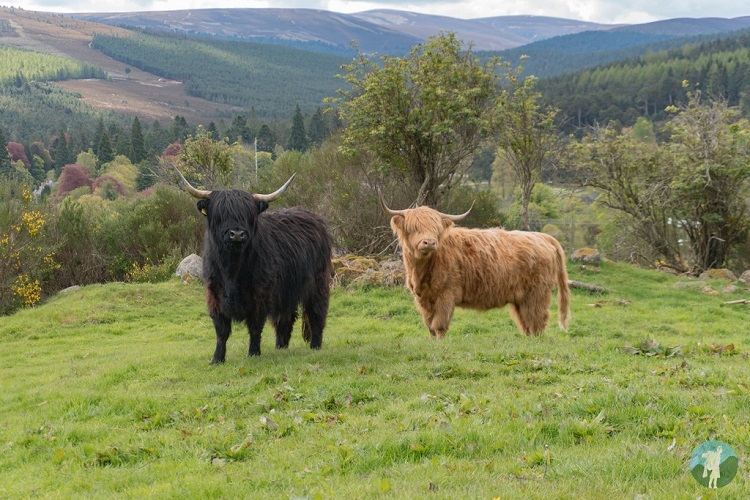 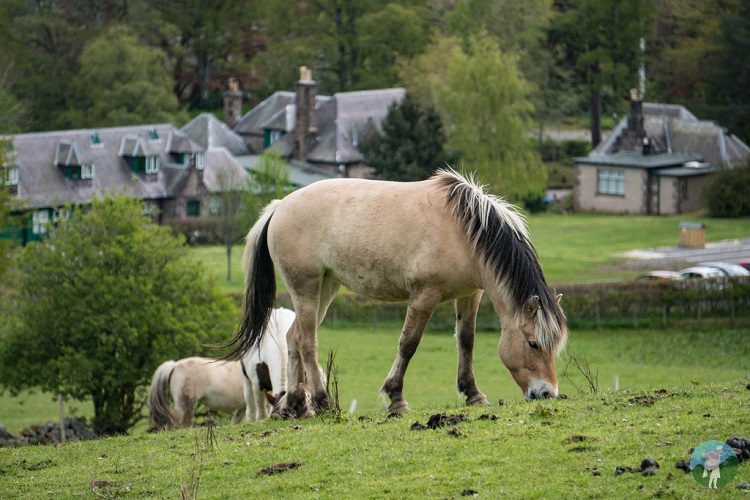 Where to Eat and Sleep

For this stretch from the Cairngorms to Aberdeen, amenities remain at a premium in a land of big open spaces and winding country roads. A great option for lunch though is the Potarch Café and Restaurant, offering good value, high-end pub grub with country charm.

On arrival into Aberdeen I was fortunate to be based at the outstanding Maryculter House Hotel on the outskirts of town. A beautiful building set on the banks of the River Dee, lavishly furnished and offering absolutely top-drawer food this is one I’d recommend in a heartbeat. They’re tough going, these campaigns, and finishing up with a great feed and comfy bed is all any traveller can ask for.

More from the North East 250

As with many Scotlanders campaigns, the idea for the NE250 was to cover a big area in a short time. Joining me on this campaign were David who took on the western stretch up into Speyside, Sonja covering the east Aberdeenshire coastline and Kim, videoing her way along the northern coast. We’ll also be merging our experiences onto a video for our YouTube channel.

Hopefully we’ve collectively shown off the best things to do in Aberdeenshire, Moray, Speyside and the Cairngorms through our adventures. As unique as it is diverse, as serene as it is chilling and as melancholic as it is fantastical, it’s a road trip of epic proportions.

This road trip was completed in paid partnership with the North East 250. While my stays and food stops were suggested and I was invited as a guest, my recommendations above are based solely on my having had an excellent experience at each and every one of them. As ever, nothing makes it into this blog unless my industry experience tells me it’s something that could be of value to you good people. I ate well, slept well and travelled well….as I’m sure you can tell.

In Search of the Perfect Spring Day Trip