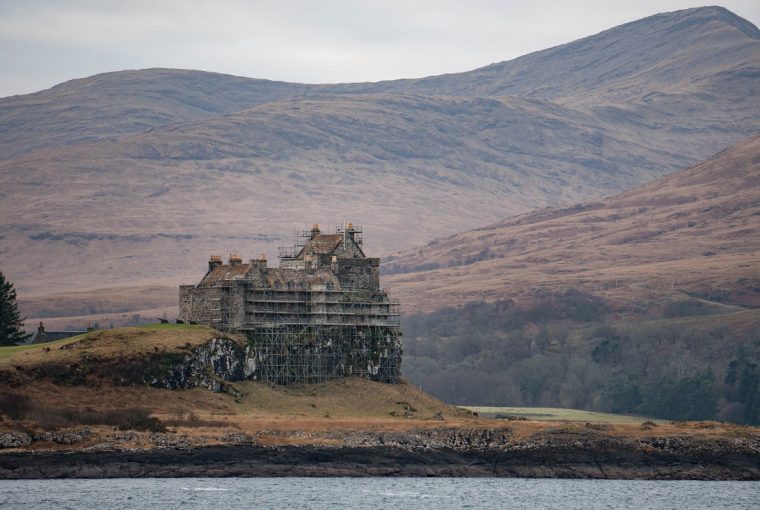 Winter Island Getaways – Things to do on Mull

I spent my first days of 2019 doing something of a first. I must be getting on but Hogmanay just wasn’t for me this year and the polar opposite of a raucous, alcohol-fuelled riot seemed more appealing – the Scottish Isles were calling. The Isle of Mull was always going to be one of my priorities this year and I accelerated my plans with a spontaneous 4-day winter trip back to the west coast. Blissful escape from the post-festive excitement and time to focus on my plans for the year was just what was needed. Here’s a quick run-through of some top picks for things to do on Mull, with more suggestions sure to follow later in 2019.

Scotland is not short of village quaintness. Dainty wee places by the water are something of a speciality whether it’s along the gentle shores of the East Neuk of Fife or set amidst the more rugged landscapes of the west coast islands. Tobermory is the epitome of the latter. While the hilly terrain of North Mull holds a deep, soulful appeal, it is the east facing ‘capital’ that calls even more urgently for the camera to make an appearance. Ludicrously photogenic, the vibrantly coloured waterfront sparkles even on the gloomiest of Scottish days. Throw in the excellent Tobermory Distillery (open year-round) with its peated malts (Ledaig is well worth a try) and you’ll find that you’ve quickly started to capture what these incredible islands are all about. 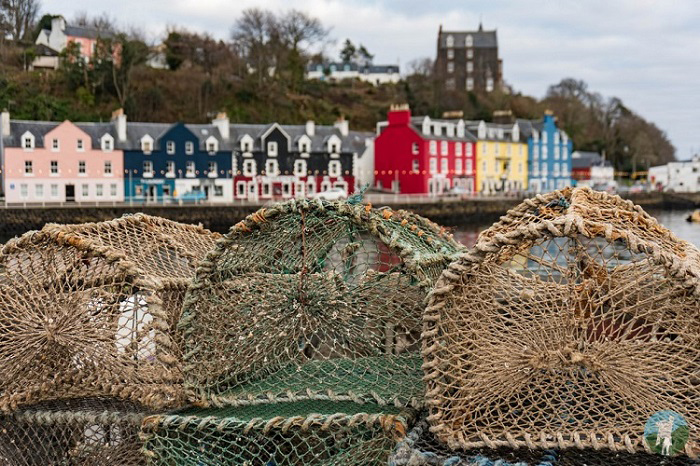 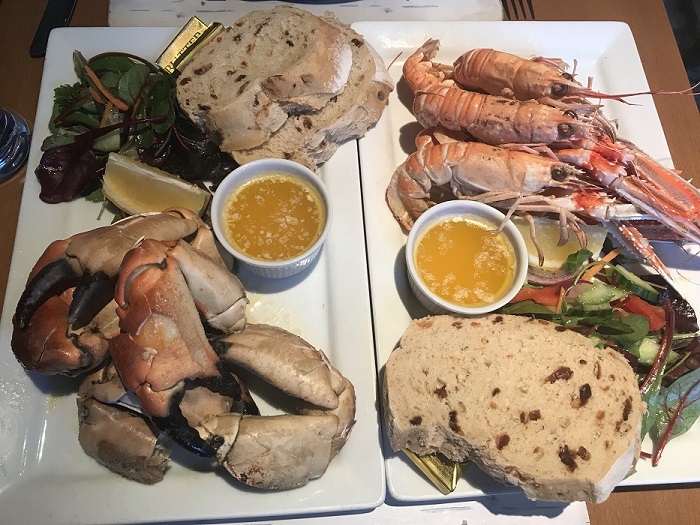 Then there’s food. My heart sank on the discovery that Café Fish was closed – this is one of the finest restaurants in Scotland – but rescue was at hand. The Mishnish along the road offered an impressive array of freshly-caught delights and, when in Rome, do as you’re told and eat seafood.

Mull has a very diverse approach to coastal appeal. Resplendent beaches are much more limited than, say, the Outer Hebrides that I never shut up about, but there’s an abundance of rock-strewn shores that offer up their own power. If there is one beach that truly stands out, though, it is the magnificent Calgary. While the Canadian city owes it all to this wee place at the end of a road to nowhere, the scale of the Bay was not something I’d fully appreciated until I’d witnessed the view from the drone. I’m not going to write anything more about it, this is one for your imagination. Picture Viking longships screaming into the bay and the desperate heartache of those forced to depart Scotland from here during the Highland Clearances. Let me know what you think in the comments below. 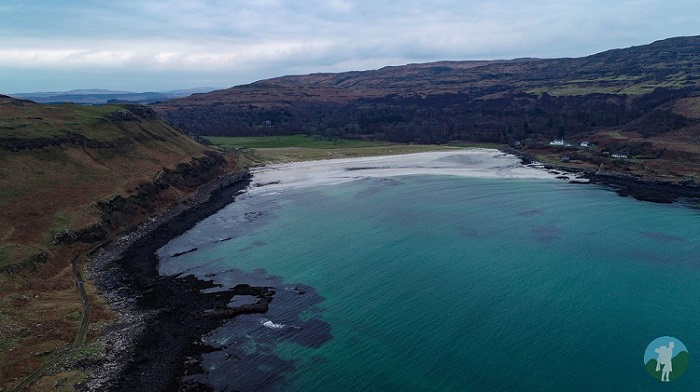 Ben More is the only island Munro outside of Skye and has long been very much on my to-do list. It does however require a full day on the hoof and, dealing with such limited January light, this is one that I’ll need to postpone until my return. Which means my net was spread further in the search for a good trail. In truth, the options on Mull are countless in this regard and, only by actually living here full-time could you genuinely do them all justice. 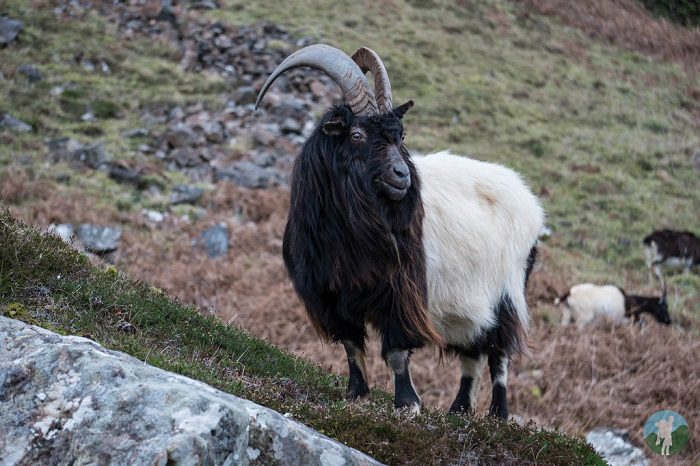 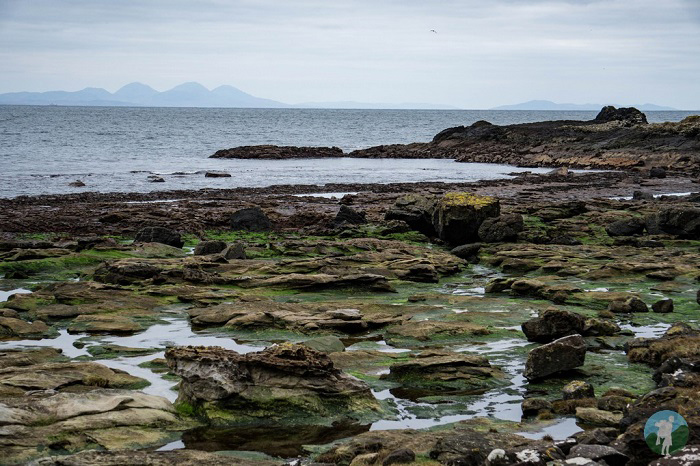 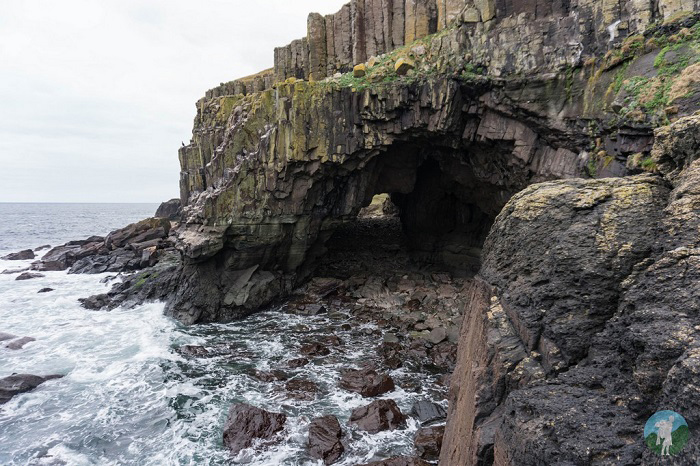 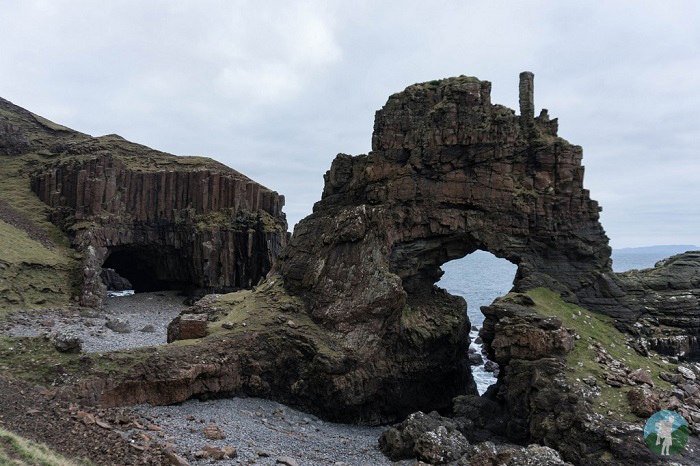 But the hike to the Carsaig Arches was one that certainly stood out in my research. An ideal introduction to the super-remote Ross of Mull that makes up the island’s south west corner, it involves a coastal clamber over very rough terrain to a couple of powerful rock formations set amidst a route that screams out the best of natural Scotland. Expect wild goats, cliff-tumbling waterfalls, well-travelled seabirds, accompanying views over to Jura’s distinctively voluptuous paps and lots (and lots) of rocks. The end destination holds all the drama that fiction writers crave as the crashing waves and squawking locals serve up a tangibly nervy atmosphere. The second of the two arches involves a very precarious dalliance with your own nervous system (and should not be attempted in high wind or by inexperienced hikers) but was very much worth it. As was the below aerial exploration of a seemingly-smallish waterfall on the way….

It’s unfortunate that it’s a case of one way in, same way back for this route as the return is a bit repetitive on the limbs. Although it’s impossible to get lost (just follow the waterline throughout), the rocky hazards underfoot make it a tough one for body and mind. As far as blowing away cobwebs goes, however, you’ll be hard-pressed to better it. Allow around 5 hours return from the pier at Carsaig where you can park up.

Could I possibly talk about things to do on Mull, or anywhere in Scotland for that matter, without finding some room for a castle or two? Come on now. This 13th Century Clan Maclean fortress is one of the most photographed castles in the land and Mull’s leading historical attraction. Facing the full assault of the west coast weather sees it in a near-constant state of on-going repair but nothing can take away from its dramatic situation. Or from its aura as one of the key strongholds of the isles – the Macleans loosely supported the Macdonalds (Lords of the Isles) and were often opposed to the likes of the Argyll Campbells when clan rivalry was at its peak. 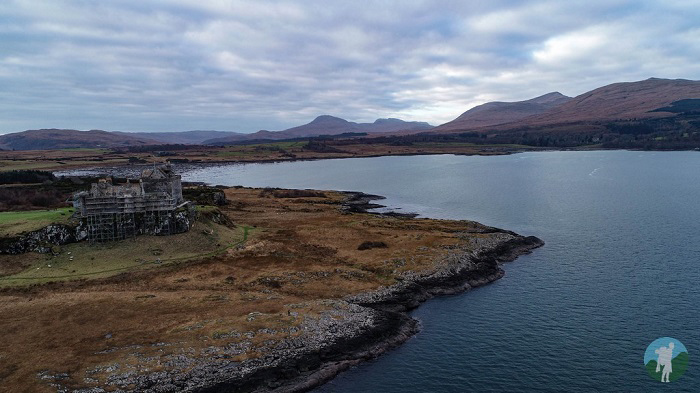 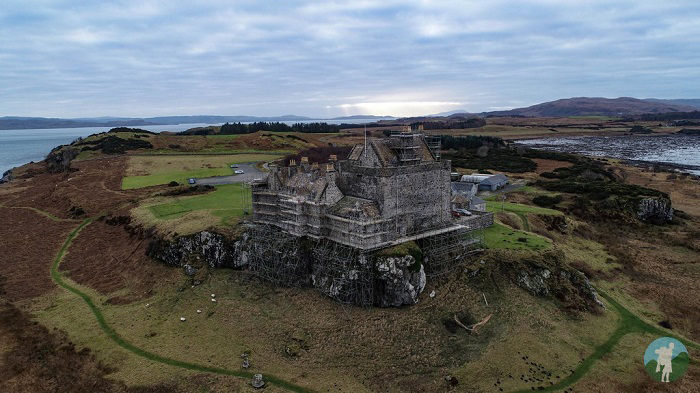 The Castle is a stunning welcome to Mull on the ferry crossing over (get yourself up top if you can for photos) and a guided tour is an absolute must if visiting in tourism season.

It’s a rare thing these days when I get to visit a Scottish castle for the first time but Moy has long managed to stay beneath my radar. While much fuss is correctly made about Duart, this shy little chap has always managed to keep itself hidden in the remote south of Mull. At the end of a road in need of much love and passing Lochs Spelve and Uisg, Lochbuie is the end of this particular line. A short coastal walk to the ruin shows off a typically dramatic spread as sea and land meet, separated by an opportunely-placed tower house. Conjuring up comparisons with Castle Campbell, Castle Stalker and Keiss Castle to name a few, it’s one for the fairy-tales. Another Maclean fortress – this time dating from the 15th Century – it now sits cold and abandoned, yet in a remarkably decent-looking state of repair. 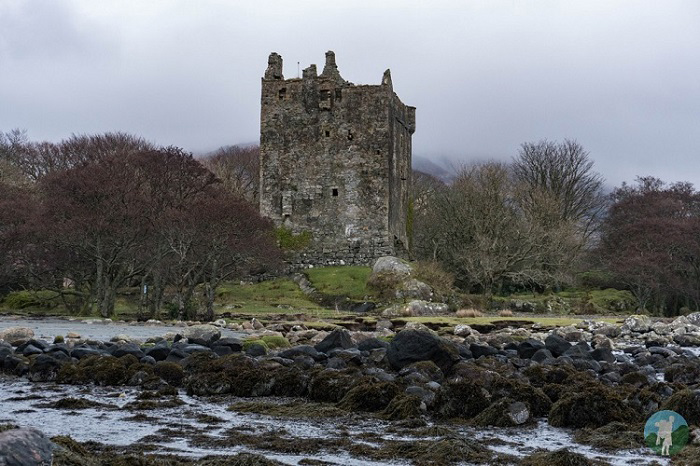 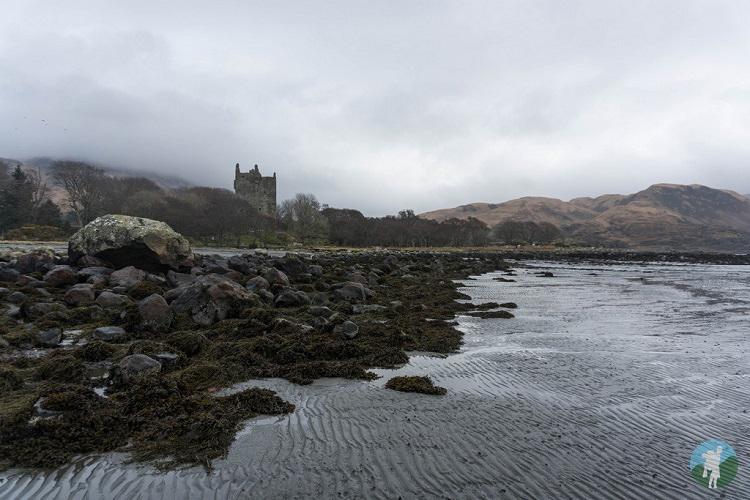 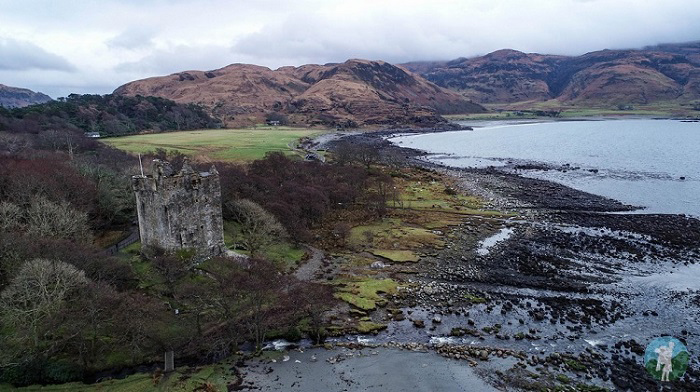 As an added bonus – and as if this scene wasn’t quite Scottish enough – the nearby Lochbuie Standing Stones complete the set. A misty Scottish moor, sulking surrounding peaks, the odd dubious sheep….a dusk visit here would have Outlander fans in a frenzy! Made up of a circular ring of stones (around 12 metres in diameter) with a couple of strays in the nearby vicinity, I’m met with the usual headscratcher moment. “Why?” Followed quickly by the realisation that I actually don’t want to know why. Ancient civilisations had their ways and whether out of some mark of respect, worship or alternative practical use, I’m just glad they are still here. 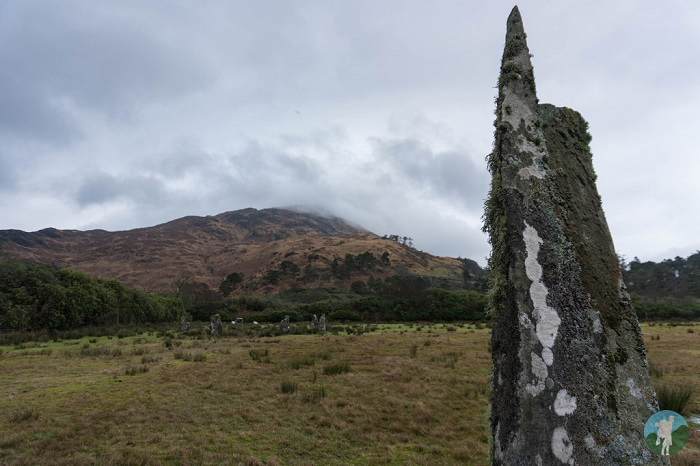 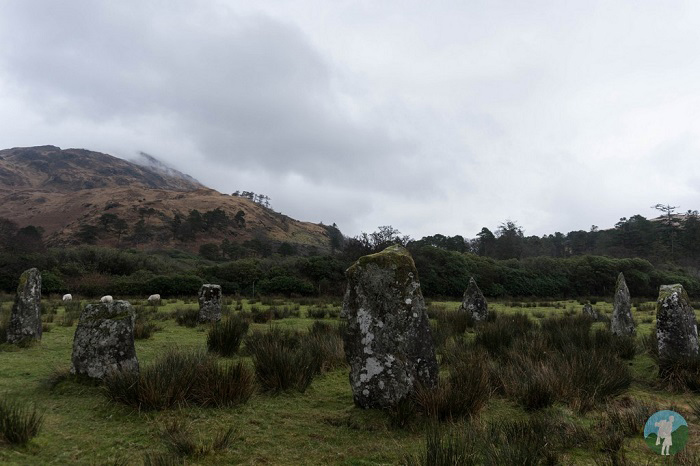 Jumping over to the Scottish islands in winter is not generally something I’d advise for most travellers, especially first-time visitors to Scotland. There are limited travel options, most tourist attractions are closed and you’re always going to have to face the risk of dismal weather throughout. However….you’ll not have to take on any crowds, total solitude is easy to find and the landscapes are at their most raw and dourly inhospitable. The peaks are like giants in a deep slumber, the waves like starving serpents and the historical relics like contemplative wizards. It’s hard to argue that this is actually when Scotland is at its most impactful.

If you can leave your timing decisions to the last minute you can increase your chances of decent spells of weather and self-catering is always an option to avoid hunting for the few dining options that aren’t shut. That said, some islands are unquestionably easier than others and the likes of Arran, Skye, Orkney, Bute and, of course, the Isle of Mull remain those with the least likelihood of winter travel issues and risk of being stranded. Under an hour on the regularly-running ferry from Oban makes Mull an invitingly appealing option. 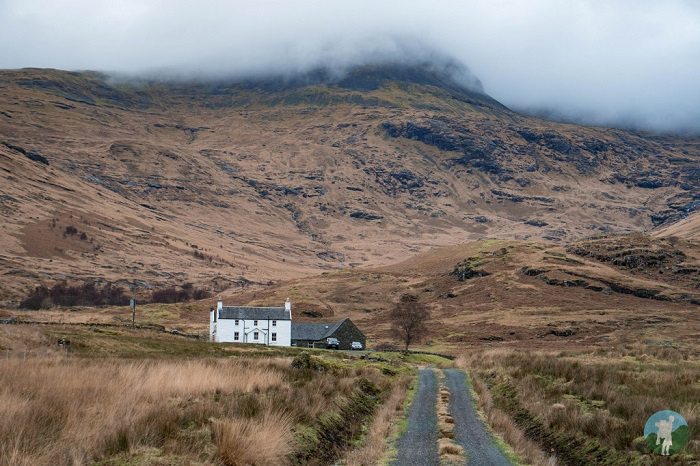 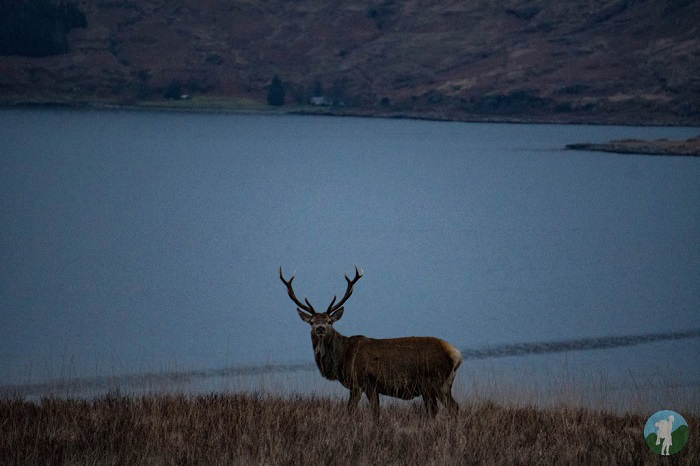 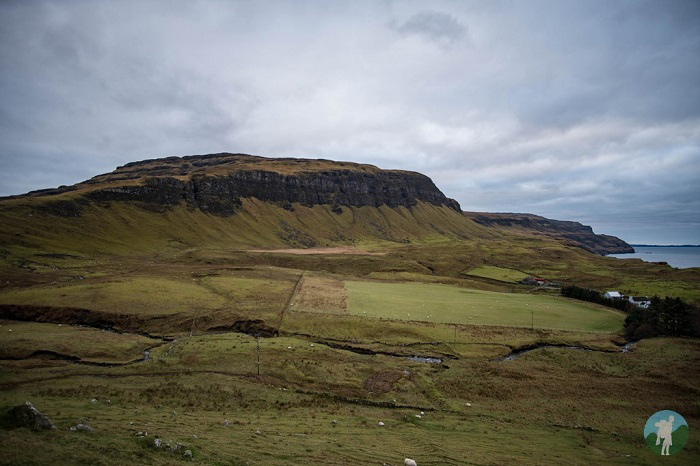 As for things to do on Mull in winter, the likes of Duart Castle and Café Fish may be closed but the castle can still be circumnavigated from outside and the true leading appeal of the islands is in the natural landscapes anyway. Arriving at empty car parks, walking for hours without seeing another soul and booking accommodation with just a few hours’ notice was an astonishing luxury and threw my generally super-prepared approach to travel out of the window. Something I need to do more of this year I think.

Start the year as you mean to go on. This one’s off to a flyer.

A Weekend Exploring the Kingdom of Fife

Off the Beaten Tourism Path in Lanarkshire