A much loved Argyll classic, Ben Cruachan is one of Scotland’s highest peaks. Several peaks form a horseshoe around the water feature of the Cruachan Reservoir. From the ridge and Ben Cruachan summit, you can spot Loch Etive to the west and Loch Awe to the south. Much of the Southern Scottish Highlands sprawls before you – amongst the best views in Scotland.

Time Taken: Around 5 hours return for just Ben Cruachan. Allow a couple of hours more for the full circuit.

Difficulty: Hard. Straight into a steep ascent from the train station, the route evens out as you approach and run alongside the reservoir. The ascent continues as you head west and straight towards Ben Cruachan. It’s a fairly obvious general direction but the path is not always clear and requires some scrambling, particularly for the final stretch. Rugged, would be the word. 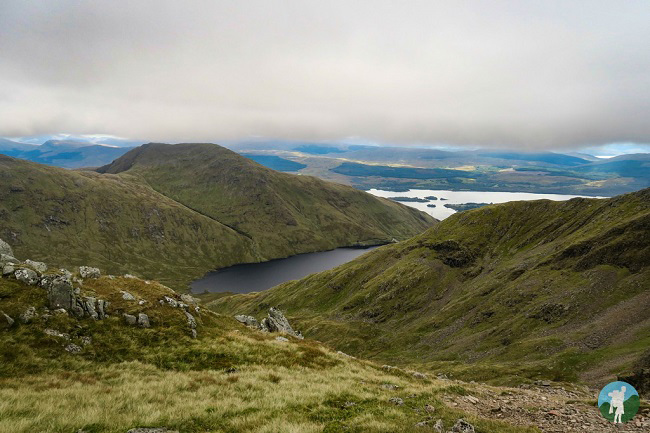 You can trace the full route in the interactive map below. Note that this route takes in both Ben Cruachan and Stob Diamh, but you don’t need to do any more than the Ben if you wish, just re-trace your journey back. Zoom in and out as needed and, to help guide you further, this map is built with geolocation incorporated into it. That means when you are physically there, you can use your mobile device to see where you are in relation to the route. Please note that your real time location marker may not be exact 100% of the time and is at the mercy of Google geolocation. You will also need to allow Location Services on your device for it to work – same as you would for a Google Map. Therefore, a good, old-fashioned map is still advisable for all rural walking routes.

Take note of the icons running vertically on the left of the map. From top to bottom you can:

The map format has been pre-set to street map style. You can, though, change the map appearance via the icon in the top right eg. to Terrain. Note the numbers along the route, they represent each mile clocked up to give added awareness of the distances involved. The elevation chart gives you a further idea of the steepness as you go, in line with each mile.