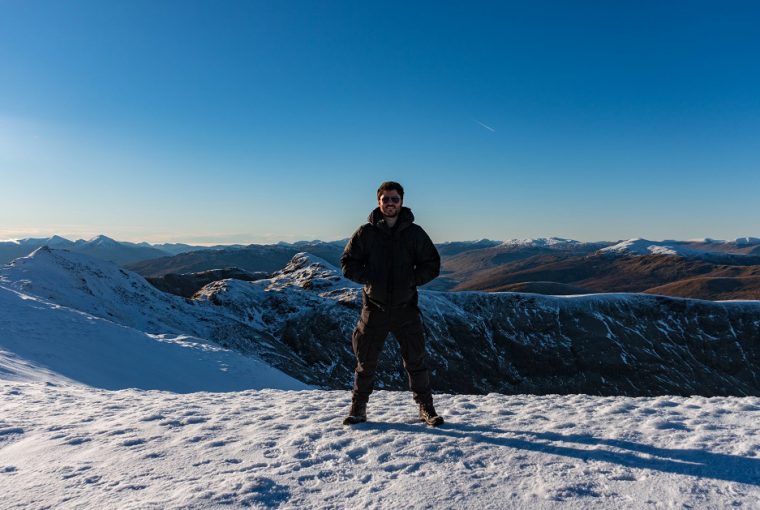 It’s an interesting time of year in Scotland. Winter has thus far been pretty stable but forecasts are wildly inconsistent and finding opportune weather for outdoor adventures is no small ask. Serious hiking trail enthusiasts love snow-covered peaks and relish getting the crampons on but, for most, we’ll lean towards those that don’t pose too much of a challenge. Faced with limited light, the majority of Scotland’s population will poke about the easy options in the cental and southern areas. With that in mind, here’s some picks to help locals and visitors stay active with some winter walking in Scotland as we ride out the rest of the chilly season…

Ben Lomond (and the seemingly even more popular Conic Hill) would have been obvious additions to this list, but I’m going to nudge you to the western side of the water and these lovelies. Much quieter than ‘Glasgow’s Mountain’, they are a series of mounds that offer a healthy doze of exertion as part of a horseshoe route. The views over the Loch are glorious. To the north, the Arrochar Alps are teasingly appealing. The hills to the west towards Helensburgh are vastly dense (seemingly ridiculous given the short distance from the city). And you may well have all of this to yourself. 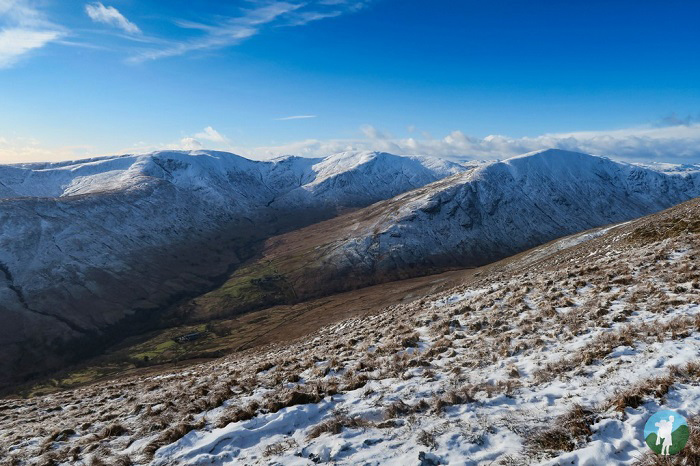 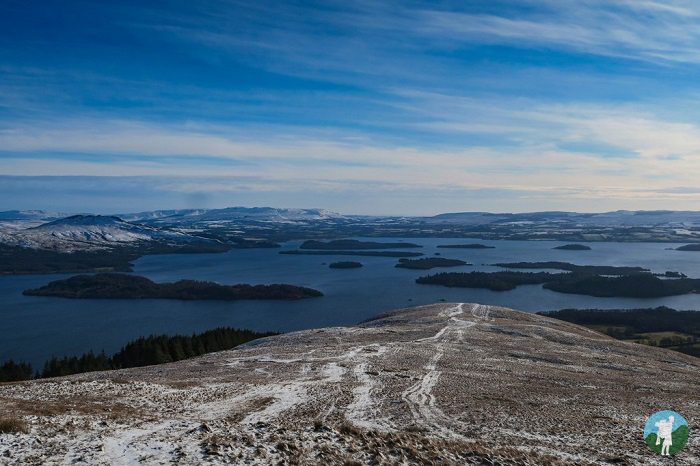 Park up just off the main A82 and allow around 4 hours for the walk itself. The terrain is varied but straightforward for the most part and is particularly suited to snow walking on bright, sunny days.

Options, options, options. Ohhh, where to start in The Trossachs. Well, everyone goes to Ben A’an of course, a ridiculously rewarding peak that requires next-to-no exertion. But if congested peaks are not your thing, you’ll want to cast your net wider. Another popular one is Ben Ledi, a luscious walk in summer that is very much on my to-do in winter conditions. It’s a mess of peaks from the summit with Perthshire, the Lothians, Stirlingshire, Lanarkshire and Argyll all squabbling for attention. 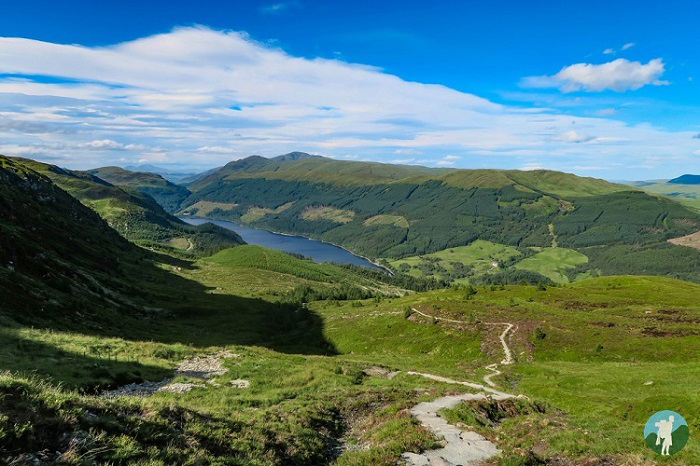 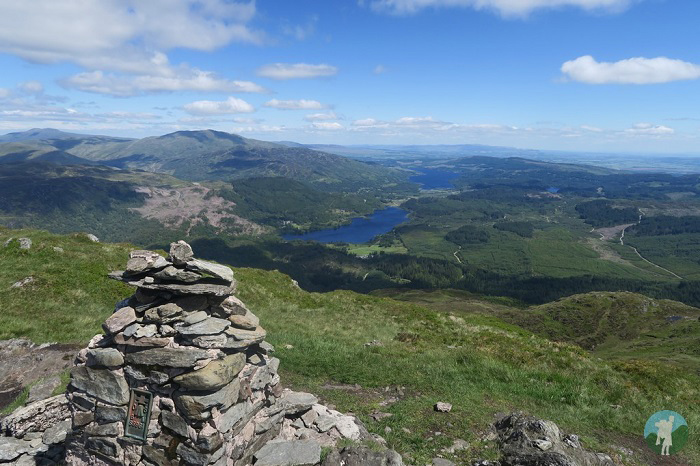 My favourite though is probably Ben Venue. Ben A’an’s neighbour across Loch Katrine, my preference may have been swayed by the glorious summer weather I had when taking it on last year, but it would sparkle in winter too. It’ll very likely be low levels of traffic that accompany you and you’ll see soon enough why this area is where Scotland’s tourism industry was really born. Pioneering minds like Sir Walter Scott waxed lyrical about this highly forested, vibrantly green region and its welcoming alternative to city pollution. The hike takes around 5 hours return and should be done at a relaxed pace, with plenty of time to explore the stunted summit. As a Glasgow boy, this is day trip heaven.

These guys have long been the quick-fire escape for Glasgow-folk, and with good reason. The pick of the bunch is Dumgoyne, a very steep volcanic plug at the western end of the series.  Many will be happy to catch their breath atop the mound and return but, for those keen on more, keep heading north east to rope in the Earl’s Seat. The latter involves a much more gradual ascent across rough, often boggy, terrain but turns it into a half-day’s hiking. Sprawling views to the north, and south to human Scotland, are your reward. 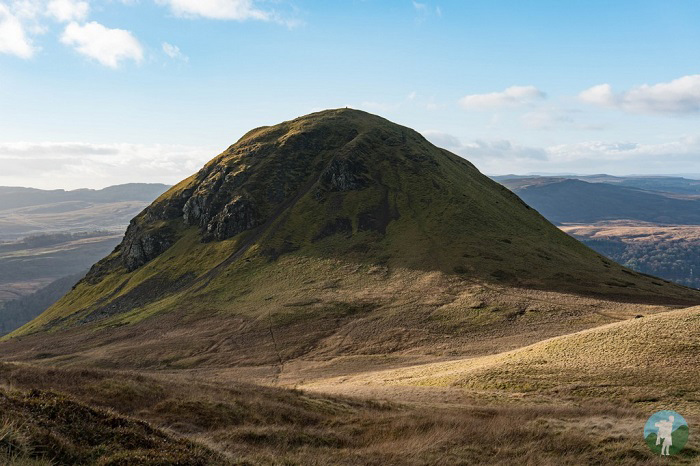 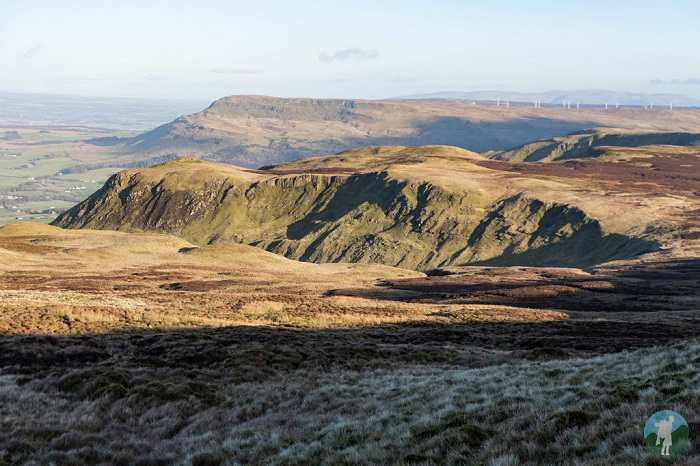 Start as near to the fabulous Glengoyne Distillery as you can (even better, finish your day with a tour and try the 18-year-old) and allow 4 hours return. Nearby you can also find the super-popular ‘Whangie’ walk which is a more family-friendly alternative to Dumgoyne. 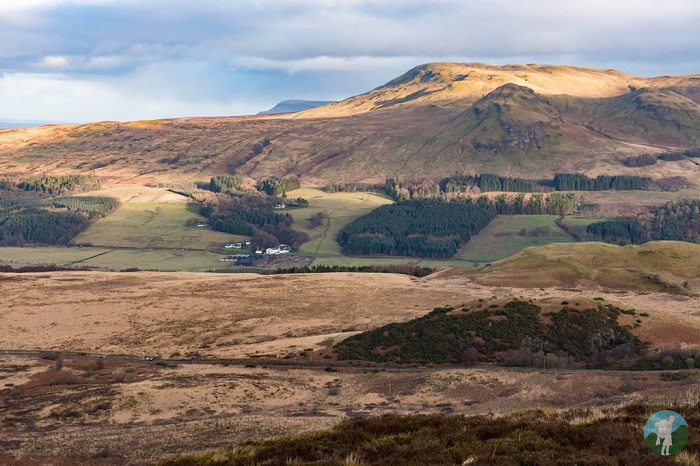 Edinburgh’s Hills are steep yet rolling, compact yet vast and offer the capital’s population a hilariously convenient plethora of walking routes that are traversable year-round. Aside from an interesting perspective over the city, the views over the Forth to Fife and east to the flatlands of East Lothian are superb.

I’d advise diving straight in and heading to the highest point, Scald Law. There’s a fabulous circuit route that starts at the Flotterstone Ranger Centre car park and encompasses Turnhouse Hill, Carnethy Hill and peaking at Scald Law. The views throughout on a clear day will likely have these guys on your repeat list and a reservoir-side walk back completes a 4-hour circuit. Steep in places, the route is very clear throughout and you’ll almost certainly have some company along the way. 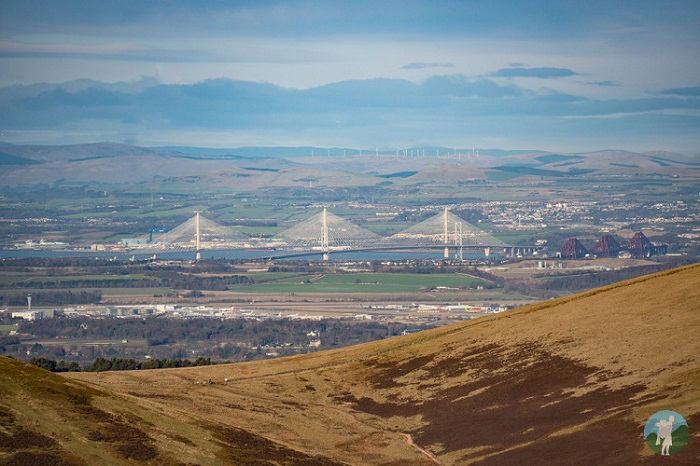 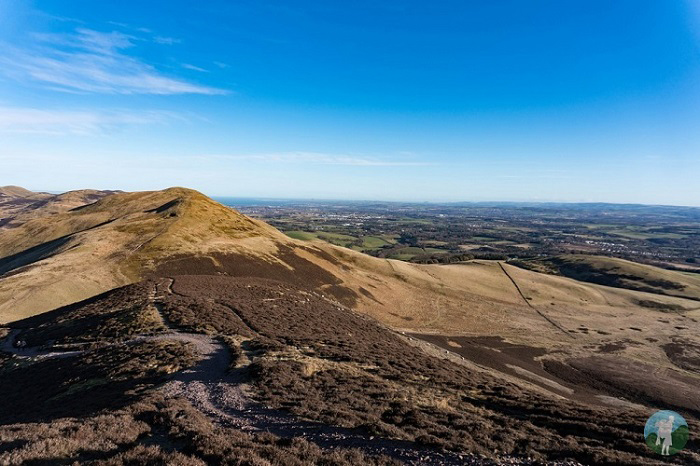 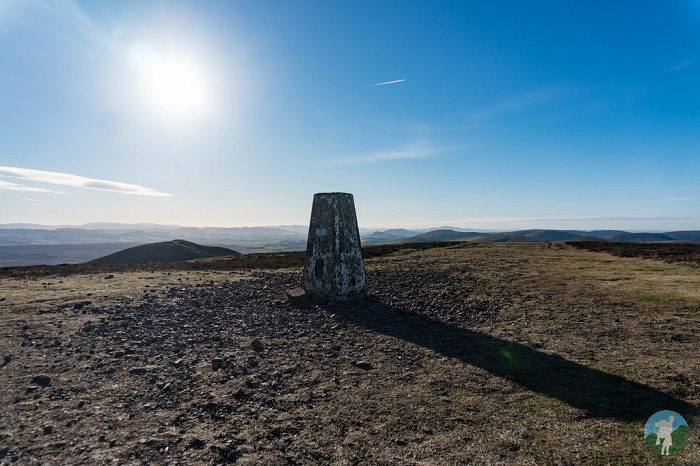 I’ve been a gigantic fan of these mounds since I was a wee boy and Central Belters have no idea how fortunate they are to have them on their doorstep. The best place to start is Dollar Glen (park up in Dollar itself), home to the superbly-set Castle Campbell, and the glen’s neighbouring peaks can be attacked in either direction. While the promise of views over the Glen might understandably nudge you west, I’d actually head east from the castle and you’ll quickly leave everyone behind. Hill jump your way as far as Seamab (overlooking the pretty village of Muckhart) and begin your descent. From Muckhart take a combination of main road and back roads back west to Dollar. 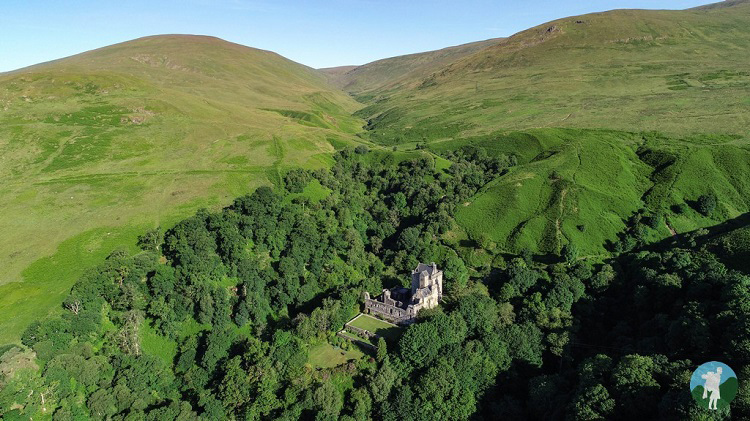 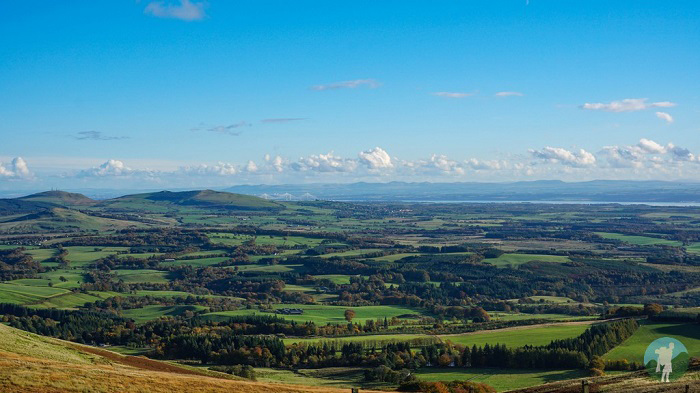 Particularly useful for east coasters in central or southern Scotland, these beauties were a long-term favourite of local boy Sir Walter Scott and remain supremely beautiful little mounds in otherwise low-lying terrain. Used by the Romans as a fort and once the site of an ancient civilisation called the Selgovae around 2000 years ago, they hold plenty of mythical legend too. Another local, Thomas the Rhymer, is said to have spent years here, in Elfland no less, at the request of a fairy queen.

The three heather-strewn hills can be targeted individually or as a triple treat, the latter taking around 4 hours to complete and starting and finishing in Melrose itself. You will inter-mingle with parts of the long-running St Cuthbert’s Way and the trails are pretty obvious throughout. My visit this winter was met with deep mist so apologies for the lack of visual support but, trust me, it’s a lovely trail and ideal for dog-walkers and families as well. Reserve a couple of hours for Melrose itself too, with its famously beautiful Abbey that holds the heart of Robert the Bruce. 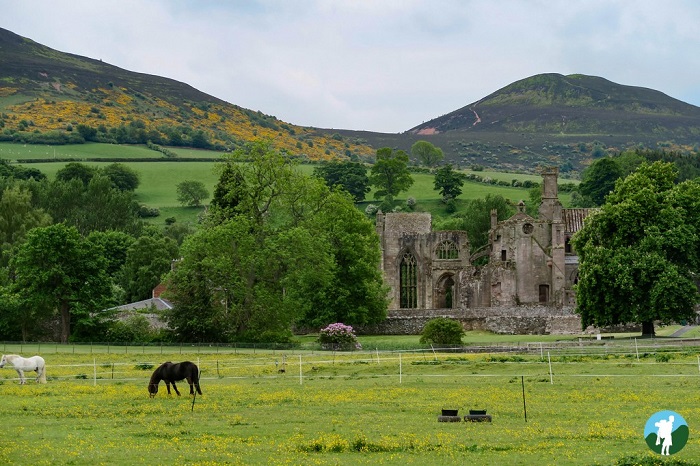 As soon as you creep into Perthshire (or Argyll in the west) you’re suddenly dealing with the start of what can become an addictive mission to explore the Highlands. While everything starts getting much taller, Perthshire is still home to the straightforward peaks that are ideal for early Munro-baggers. Ben Lawers is the most obvious and well-trodden starting point, followed by Schiehallion. But it’s this chap that trumps them for me and was my birthday hike this winter. 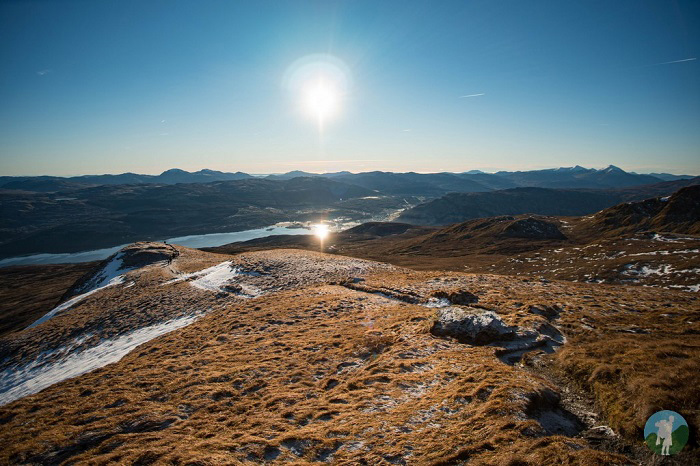 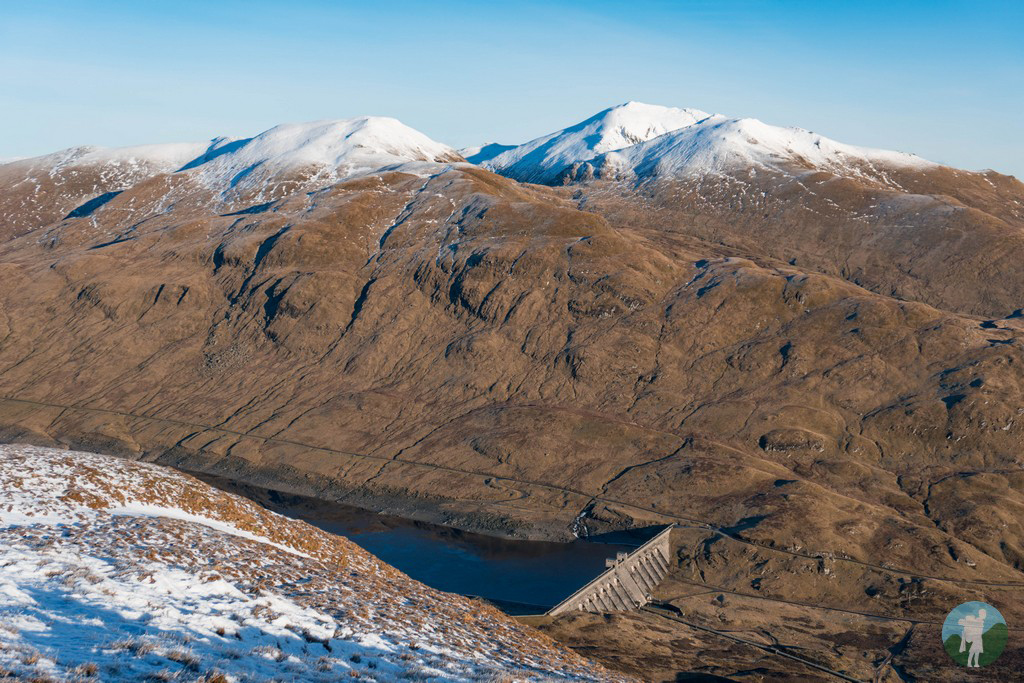 Just taking on the peak on its own results in a 4-hour round trip from the handy car park (shared with Ben Lawers), if light allows you can also extend it to cover the full ridge as part of a 7-hour circuit. Resplendent with a winter coat on, Munro debutants could do much worse…..

Merely a taste of what outdoor treats there are for us, winter is, in an odd way, perfectly suited for hikers. Now, I’m not saying we should all charge to the north west Highlands and get lost in mountain ranges in potentially lethal conditions, but these guys are all pretty easy year-round. I can’t imagine a visit to Scotland being complete without a walk of some sort – these ones won’t let you down.

I don’t provide a huge amount of coverage when it comes to gear, but every now and then something groovy comes along. A water bottle that filters and purifies pretty much anything caught my eye. When in the outdoors, especially over multi-day hikes, you’re going to run out of water from the tap. While you can never be sure of the drinkability of the water sources you stumble across, this guy can remove all doubt. 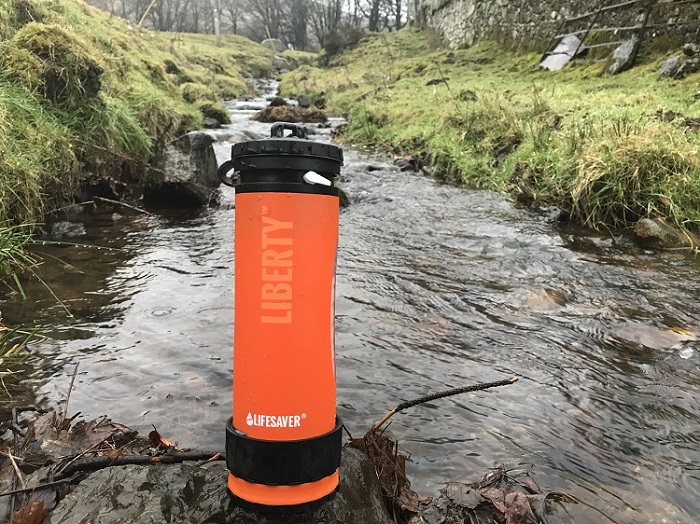 Although I was gifted this water bottle to test out its usefulness, I can confirm that it works a treat.

Off the Beaten Tourism Path in Lanarkshire